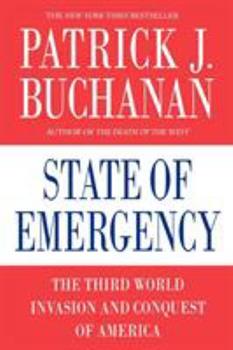 State of Emergency: The Third World Invasion and Conquest of America

"The one absolutely certain way of bringing this nation to ruin, of preventing all possibility of its continuing to be a nation at all, would be to permit it to become a tangle of squabbling nationalities," said Theodore Roosevelt. State of Emergency will demonstrate that this is exactly what is happening to America and may now be unstoppable. The United States of 1960 was a First World nation, 90% of whose people traced their ancestry to Europe,...

Is It Too Late To Save The United States Of America?

Published by Thriftbooks.com User , 15 years ago
Before this book I had little respect for old guard conservative Pat Buchanan, but now I come to see him as someone who has both a significant grasp of the larger scope of history, and the personal courage to write a socially-unpopular opinion. Buchanan begins this, his plea that Americans act to save an internally-declining America, by quoting the greatest theoretical historian ever to live, Arnold Toynbee, who, with his sound observations about the forces of history as they relate to the rise and fall of nations and civilizations, has never had an equal. Buchanan herein compares the plight of the United States in circa 2006 with that of the Roman Empire in the period right before its descent toward cultural implosion. A parallel is drawn between the east-central European "barbarians" of seventeen centuries ago, whose infiltration of Rome's imperial borders in the form of economics refugees swamped Roman welfare programs and pushed aside the more successful Roman citizenry, and the inundating populations of Hispanics who are illegally invading this nation today. (As many Hispanics have illegally entered the United States as the sum total of all legal immigrants from colonial times thru the Presidency of John Kennedy.) Buchanan argues that this invading force has no sympathy with America and little grasp of the ideals and customs or even the language that all encompass an American identity. Unwilling to assimilate into the melting pot that has made America so strong, these outsiders---ever Mexicans, never to become Americans---seek a nation within a nation, and have been vocal about this desire. Whatsmore, there is a deeply-held sentiment among most Mexican illegal aliens that Americans are an ancient enemy, and the land within US borders is rightfully theirs. Buchanan delivers some shockers, such as the little known or reported news that the Mexican army frequently makes armed incursions into the United States, in some instances even going so far as to open fire on American customs and immigrations agents. Buchanan also cites some dire forecasts that project that by the mid-point of this present century, presumably within the lifetimes of most of my generation, Hispanics will account for in excess of one-third of America's population, and that all across the western world, from Europe into Russia, progressive democratic nations will be overrun by a veritable army of Third World foreigners whose questionable values will replace much of that which has lifted the west to global prominence. It is a dark scenario, and recognizing that this literal invasion will be and has been at great cost to America's deserved greatness is only pragmatism and patriotism, a desire for survival, not bigotry. And to solve our plight, illegals need not be "shipped home" in boxcars as many claim. Buchanan makes the sound case that if our government would simply cease with those economic incentives and entitlements which draw illegals here in the first place, the tid

Published by Thriftbooks.com User , 15 years ago
It really does not matter on which side of the argument you fall on; you need to read this book. I did not agree with everything Mr. Buchanan said, nor will most. The great thing about this book is the overwhelming amount of statistics, history and other people's opinions (like JFK's) that are included. That is the meat of the book. The seemingly unending amount of shocking statistics (from trusted sources) is what hit me the most. He also brings up topics of the illegal immigration debate I had never thought of (i.e. the up swing in certain diseases brought in by the illegals and the increasingly bloody black v. Hispanic gang battle). I can see why some people have said this book is racist. That being said, they are wrong. Mr. Buchanan just plain refuses to be politically correct. For that, he does deserve commendation. In the end, whether you agree or disagree with Mr. Buchanan's opinions, the statistics and history are not up for debate. Sparing the multiple details, I can tell that this book has changed my stance on the issue and I can see why people like Juan Hernandez (arguably the slimiest most underhanded bum-pimple involved in illegal immigration) are not holding back in trying to slap it down.

Published by Thriftbooks.com User , 15 years ago
Buchanan really irritates the heck out of me. I cut my conservative teeth on his writings in the old St. Louis Globe Democrat. Now he has metamorphosed into a sort of populist demagogue. I disagree strongly with Buchanan on some critical issues, particularly his stance on Israel and his obdurate refusal to recognize the threat posed by Islam. Last week I actually heard him refer to Islam as "one of the world's great religions" thereby tacitly elevating this political cult to a status equal to that of Christianity and ignoring Islam's 1400 year history of violence and barbarism. But in this book Buchanan manages once again to get it right and raises the level of his game to that which he enjoyed as a young firebrand at the St. Louis Globe Democrat. The "business as usual" and "all that counts is the economy" Republicans and "anything for a vote" Democrats are selling our country's sovereignty down the road albeit for different reasons. Buchanan says, "From Gibbon to Spengler to Toynbee and the Durants, the symptoms of dying civilizations are well known: The death of faith, the degeneration of morals, contempt for the old values, collapse of the culture, paralysis of the will. but the two certain signs that a civilization has begun to die are a declining population and foreign invasions no longer resisted. . . . With the Immigration Act of 1965, the nation began to import another electorate. . . . Third World immigration is drowning the Republican base. . . . Mass immigration pushes politics to the left. . . Democrats will never secure the border. They may play the patriot card against Bush, but they are running a bluff. . . . America is being invaded, and if this is not stopped, it will mean the end of the United States." In his chapter on the "Roots of Paralysis" Buchanan does an excellent job of examining the motivations behind the reluctance of the Democrats or Republicans to tackle an issue whose solution the Constitution, the law, politics and duty overwhelmingly support. Buchanan's answer: Political correctness, political cowardice, political opportunism, a sense of guilt for America's sins and the twin ideologies of "economism" and international liberalism. Scholar John Attarian gave a name to the cult that has captured the party of Goldwater and Reagan: "economism." To the "economite," the true believer in economism, sovereignty, independence, industrial primacy, the values of community and country, must be sacrificed, should the gods of globalism so command. What's the dominant religion of the past 100 years? Not Christianity! It's the idea of economic growth, the Church of GDP. The belief that EVERYTHING should be subordinated to our economic interests. And of course the Democratic Party sees immigrants, legal and illegal, as future voters who will bury the Nixon-Reagan coalition. Ours is a nation and culture steeped in and paralyzed by guilt. Prior to the '60s we did not feel the need to apologize for America's past, but took pride

A Democrat who WOKE UP

Published by Thriftbooks.com User , 15 years ago
I am a person who hass worked in national politics for 12 years and always on the Democratic side of the aisle. I have, however, woken up to the reality that BOTH parties are afraid to say what Pat Buchanan says so well in this book : we are being invaded by criminal illegals, and we have to act now to stop our country from being taken over by uneducated, poor criminals who have no desire to become part of America. Pat Buchanan says what Bush and the rest of our national politicians - in both parties - are afraid to say. Facts are facts, and the truth is that this country is being turned into a Mexican barrio full of illegals with their hands out. If you doubt Pat Buchanan or think he is a nut... take a drive through Los Angeles, Phoenix, San Antonio, Miami or NYC. We are importing over 5,000 illegal poverty-stricken people into this country every day and it will be our downfall. Buchanan is right and he simply states the TRUTH.

Bush and Rove need to read this now

Published by Thriftbooks.com User , 15 years ago
Awesome book. Exposes lots of myths: California used to be full of Mexicans. BS. Only about 3000 Mexicans / Spanairds in CA when US won it in war. Shows how Latin America is unloading its poor, unskilled and unwanted on the US - much like Castro did in the Mariel boatlift. Dispels the notion that every illegal alien is simply a simple honest campesino who wants a better life; a lot of illegals are criminals who are exporting their violent crime ridden culture to the US, e.g. MS-13, etc. When you read this, you realize how utterly both Clinton but particularly Bush has failed the US people on this issue. Both have completely sold out to the latin and business vote. Ironically, most of the Legal latins I know are MORE concerned about this issue than ignorant Americans; they know what's coming over the border, and they don't like it. Great book, easy read.
Copyright © 2020 Thriftbooks.com Terms of Use | Privacy Policy | Do Not Sell My Personal Information | Accessibility Statement
ThriftBooks® and the ThriftBooks® logo are registered trademarks of Thrift Books Global, LLC