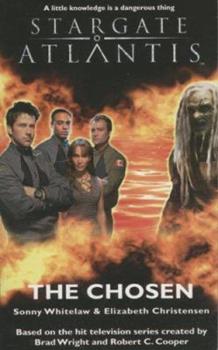 (Book #3 in the Stargate Atlantis Series)

Born to rule...With Ancient technology scattered across the Pegasus galaxy, the Atlantis team is not surprised to find it in use on a world once defended by Dalera, an Ancient who was cast out of her society for falling in love with a human.But in the millennia since Dalera's departure much has changed. Her strict rules have been broken, leaving her people open to Wraith attack. Only a few of the Chosen remain to operate Ancient technology vital to...

Published by Thriftbooks.com User , 13 years ago
I thought this book was great. I didn't want to put it down. Who ever said they lost interest while reading this book must get bored easily.

Published by Thriftbooks.com User , 14 years ago
I really enjoyed this book. It is a really good story and is well written. It deals with people who have the ancient gene and have elevated status because of it. I personally like reading more stories about the Atlantis team and seeing things that aren't shown on the screen. You see Major Sheppard become more of a military leader who has to control and army and save this world. It is a good read.

Published by Thriftbooks.com User , 15 years ago
I've got a lot of the stargate books and I think all of the books have been getting better, but this is hands down the best by far. From what I've seen, books based on television shows generally seem to steer clear a bit about what's motivating characters because they rely on fans to insert their own ideas about what the characters might be thinking. Although some of the other SG-1 titles also did this, `getting inside the heads' thing, the Chosen is much more like a real book rather than a good television book. With every scene we're right inside the characters. We feel what Rodney feels, about things like his father and the way he was treated, and how that affects him now and what he does. With Teyla we feel how she has had to change the way she thought as an Athosian who just put up with the Wraith attacking them, and as someone who is now prepared to stand and fight against them. With Weir, we `get' her doubts about herself and some of her decisions, and why. And I really liked the start, with Sheppard and `coin'. It seemed just right for him and really put you in the same position as he was, and the decision he had to make. The setting for the story is a stage much, much bigger than what we would ever see on screen. I think this is another thing, like getting inside the characters, that the writers have really used very, very well to the benefit of this story. Instead of just, say, a village or a city that we would see on the show, they have created a whole civilization spread across the countryside, so you get a really strong 'epic' feel to the story. There's also a map if you're not sure where things are happening during the actual battle with the Wraith. You also get that epic feel from the depth and complexity of the story itself. I think if they ever tried to film this, it would have to be around three hours long, possibly three to four episodes, but I don't think they'd have the budget. Still, I'd really love to see Peter Jackson direct it!
Copyright © 2022 Thriftbooks.com Terms of Use | Privacy Policy | Do Not Sell My Personal Information | Accessibility Statement
ThriftBooks® and the ThriftBooks® logo are registered trademarks of Thrift Books Global, LLC