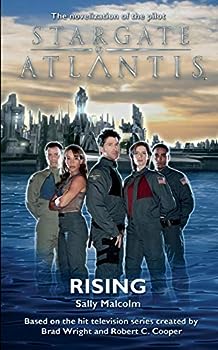 (Book #1 in the Stargate Atlantis Series)

Atlantis will rise again...Following the discovery of an Ancient outpost buried deep in the Antarctic ice sheet, Stargate Command sends a new team of explorers through the Stargate to the distant... This description may be from another edition of this product.

Published by Shelly , 1 year ago
Finding a novelisation of the pilot episode of the spin-off Stargate: Atlantis, there was no way I was not going to order this book. It was well-written, with good insights into the characters, and there are even a few little gems included that were from the original script but didn't make it into the show.

Published by Thriftbooks.com User , 13 years ago
Let me tell you, this book A-awesome! Sally Malcolm really understands the characters, and their inner monologues and thoughts are quite revealing and hilarious at the same time too. She nailed Jack O'Neill and John Sheppard perfectly. Their wry humor, the laid back attitude... Her McKay is convinced that the universe is out to get him, that for some reason, fate hates him personally. Teyla is a wise, thoughtful leader. And even Weir and Ford are likable! My favorite part of the book/episode is the beginning that takes place in Antarctica, when we get to see the characters for the first time and the threat of the Wraith is still far, far away. If I didn't find it silly, I would talk about the book in capslocks, I love it so much!

Published by Thriftbooks.com User , 15 years ago
I love Stargate Altantis, the show is smart and fun. The novelization of the pilot "Rising" is just the same. There are wonderful "inside their heads" moments for almost every character. This book is a quick, fun read, with lovely color photos in the center of the book. The book is true to the script, which means that certain scenes are played out in a slightly different order than you see them in the aired pilot. Some lines are spoken by different people so that might be a little jarring if you've watched it as many times as I have. There are a few very good scenes that are not in the show that are in this book that I really liked. So if you like novelizations, I hightly recommend this one. If you've never read one, this would be a good one to get. And if you've never seen SG-Atlantis, who knows, it might peek your interest in a really well made show.

Published by Thriftbooks.com User , 16 years ago
I am currently reading Sally Malcolm's novelization of the Stargate Atlantis pilot episode, "Rising". I am a huge fan of this show and, therefore, very particular about the way the characters are portrayed in stories. I am finding that Ms. Malcolm has a very good grasp of the characters from the show. She writes them well and has, as far as I've read, kept the characters true to the premise of the tv show. She also has added some wonderful insights into the characters that would help explain the story to those readers who are not as familiar with the tv show. I would definitely recommend this book and I also hope that Sally Malcolm will write more Atlantis novels!
Copyright © 2022 Thriftbooks.com Terms of Use | Privacy Policy | Do Not Sell My Personal Information | Accessibility Statement
ThriftBooks® and the ThriftBooks® logo are registered trademarks of Thrift Books Global, LLC