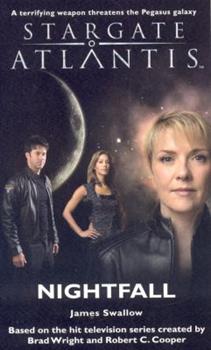 (Book #10 in the Stargate Atlantis Series)

Deception and lies abound on the planet of Heruun, protected from the Wraith for generations by the mysterious 'Aegis'. But the 'Aegis' is something no one can imagine - a threat so dangerous that Colonel Sheppard and his team must risk everything to eliminate it from the Pegasus galaxy.

Published by Thriftbooks.com User , 12 years ago
I don't normally write reviews on here but wanted to on this book. I just finished it yesterday and loved every moment of it. I could not put it down but had to each day due to work. It was fun to read a book where Carter was involved with Atlantis and seeing their battle with the Wraith while trying to save the people on the planet. I don't want to reveal the big surprise on the book with another race but lets say it was a shock although you could tell as you read who it was. I agree on the other review on the names being said with their whole name later in the book but once you are in a grove on reading, you don't notice it much. I have noticed that same thing in a number of the Stargate books, so am a bit use to it. I would recommend this to anyone in heart beat, especially if you loved the fourth season of Atlantis. Add in a major role for Lorne as well, who has become my favorite character after Carter.
Copyright © 2022 Thriftbooks.com Terms of Use | Privacy Policy | Do Not Sell My Personal Information | Accessibility Statement
ThriftBooks® and the ThriftBooks® logo are registered trademarks of Thrift Books Global, LLC