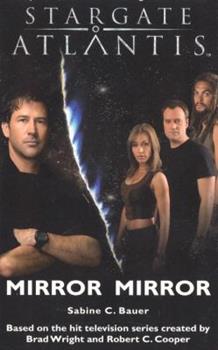 (Book #9 in the Stargate Atlantis Series)

When an Ancient prodigy gives the Atlantis expedition Charybdis - a device capable of eliminating the Wraith - it's an offer they can't refuse. But the experiment fails disastrously, threatening to unravel the fabric of the Pegasus Galaxy. Doctor Weir's team find themselves trapped, each fighting for their lives in a galaxy falling apart.

Published by Thriftbooks.com User , 12 years ago
I'm a big fan of all the SGA novels, and "Mirror Mirror" is no exception. It seems a bit bleak for the first twenty or so pages, but it picks up exceptionally fast, and digs its claws into you in record time. It captured the characters in ways that the original TV series isn't physically capable of doing, and showed them to many as multi-faceted as we expect them to be. A slight warning: if you don't understand some of the techno-babble, this'll be a doozy for you. Just watch a few of the technical episodes from the show (such as "Rising", "Before I Sleep", and "The Last Man"; possibly SG-1's "Window of Opportunity") and it'll bring you up to speed.

Published by Thriftbooks.com User , 13 years ago
I really liked this book, the whole idea, the adventure, the fact that we saw everybody's POV, including Zelenka's. So, why didn't I give it 5 stars? Well: a) The author should have definitely let a Czech native speaker take a look at Zelenka's Czech phrases - some of them are totally nonsensical. b) There were some small mistakes - like the fact that Atlantis' gate had no shield or that McKay liked a lemon cake (on the show, he's allergic to citrus!) c) It was too bad that for the better part of the book the team was separated - which was the point, after all but I really adore those four working together! But mostly, the one star lacking is point c). Other than that, the story was truly fascinating and I loved the whole Ikaros thingy

Stargate Travels a MESS - in a fun way

Published by Thriftbooks.com User , 13 years ago
I really enjoyed this book, the story line was a lot of fun, and I would have loved to see this book as an actual Stargate Atlantis episode. The characters were great and true to the TV show. My only complaint would be the editing of the book. I found so many typos and grammar mistakes! Whoever the editor was better find another profession, usually I can keep on reading the book and not care, but this book is full of them, to the point where it became distracting. Other than the typos, the story line was great, very detailed and the characters well described.

Published by Thriftbooks.com User , 13 years ago
I am not an avid reader, but read the Stargate Atlantis Novels as they come out. Mirror Mirror was excellent, I didn't want to put the book down and read it in less than a week. I highly recommend this book to all. The action was riviting and kept you trying to figure out what is going to happen next which is what I love.

Published by Thriftbooks.com User , 13 years ago
I have never written a book review before so here goes.Such a lot goes on in this book its worth a second read just to make sure you dont miss anything. The way its written it feels just like you are there on the show. All the characters are used well and true to their TV image. There,s a lot of action and some sadness in this book. Teyla is the character that holds it all together and is nicely used. The story concerns multiple timelines and an unravelling universe and the rush to stop it. So if you like a book packed full of action this is one for you.
Copyright © 2022 Thriftbooks.com Terms of Use | Privacy Policy | Do Not Sell My Personal Information | Accessibility Statement
ThriftBooks® and the ThriftBooks® logo are registered trademarks of Thrift Books Global, LLC