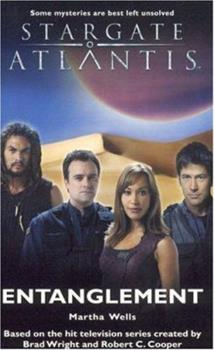 (Book #6 in the Stargate Atlantis Series)

When Dr Rodney McKay unlocks an Ancient mystery on a distant moon, he discovers a terrifying threat to the Pegasus galaxy. Determined to disable the device before it's discovered by the Wraith, Colonel John Sheppard and his team navigate the treacherous ruins of an Ancient outpost. But attempts to destroy the technology are complicated.

A Whole Lot of FUN!

Published by Thriftbooks.com User , 13 years ago
I loved this book, the character descriptions and personalities were perfect, exactly like the awesome actors from the TV show. It had a great story line, that kept getting better and better, I couldn't put it down, and plan on reading it again and again. If you love the TV show you will love this book!

Would make a fantastic 2-part episode or movie

Published by Thriftbooks.com User , 13 years ago
The back of the book says, "When Dr. Rodney McKay unlocks an Ancient mystery on a distant moon, he discovers a terrifying threat to the Pegasus galaxy. Determined to disable the device before it's discovered by the Wraith, Colonel John Sheppard and his team navigate the treacherous ruins of an Ancient outpost. But attempts to destroy the technology are complicated by the arrival of a stranger - a stranger who can't be trusted, a stranger who needs the Ancient device to return home. Cut off from backup, under attack from the Wraith, and with the future of the universe hanging in the balance, Sheppard's team must put aside their doubts and step into the unknown. However, when your mortal enemy is your only ally, betrayal is just a heartbeat away..." This is the first Atlantis book I've read because I prefer SG-1 over Atlantis, but this was on my birthday wishlist anyway. This book was actually excellantly written and pretty exciting. The story would make a fantastic two-part episode or a direct-to-dvd movie. The plot twists are of the worst-case scenario variety, but they're not overdone or ridiculous. I thought the action pacing was good, the characters were well written and accurate in mannerism and speech. This was a very enjoyable book. This story takes place sometime recently after Atlantis has deceived the Wraith into thinking the city has been destroyed. The plot centers around a quantum mirror and an alternate reality where the wraith species consider feeding on sentient species a crime worthy of death. Characters from the show in the book include: John Sheppard, Teyla, Ronon, McKay, Zalenka, Carson Beckett, Major Lorne, Elizabeth Weir, Colonel Caldwell, Hermiod, Dr. Novak, and Miko Kusanagi. Well worth reading and highly recommended.

Published by Thriftbooks.com User , 13 years ago
This book was very good. It was hard to put it down and I didn't want it to end.

Published by Thriftbooks.com User , 14 years ago
It's very rare that a tie-in novel is as good as the show is, much less surpasses it, but this definitely does it. Fantastic characterization, a solid, interesting plot that works *with* the characters, and wonderfully written. I cannot recommend this enough to anyone who is a fan of Stargate at all.

Published by Thriftbooks.com User , 14 years ago
This is an excellent addition to the series of original Stargate:Atlantis novels. Martha Wells provides a story full of excitement and drama, bringing the characters to life so that you can almost hear the actors' voices as you read. Fans of Rodney McKay should particularly enjoy this novel, although the other characters shine in this story, too. The plot is intriguingly complex and the denouement is satisfying both emotionally and intellectually.
Copyright © 2022 Thriftbooks.com Terms of Use | Privacy Policy | Do Not Sell My Personal Information | Accessibility Statement
ThriftBooks® and the ThriftBooks® logo are registered trademarks of Thrift Books Global, LLC