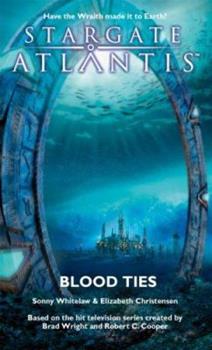 (Book #8 in the Stargate Atlantis Series)

by Sonny Whitelaw and Elizabeth Christensen

The Atlantis team return from the Pegasus Galaxy to investigate a Wraith sighting on Earth. Teaming up with members of SG-1, they soon discover that the Wraith aren't the only monsters stalking human prey.

Wraith are among us

Published by Thriftbooks.com User , 13 years ago
I thoroughly enjoyed this one. I have half of the novels so far, and all of them keep the characters consistent from screen to page. Wraith on Earth. Anyone familiar with the series will shudder at those three words. The story moves at a steady pace and is very well written. The chase goes from Colorado to Iraq to Australia, with several twists that make this a good read. I'm not going to say more, but vampires, and succubi are involved. Oh, and don't forget the intelligent dinosaurs!

Published by Thriftbooks.com User , 13 years ago
This is by far one of my favorite Stargate books. It was incredible and I can see a sequel out of it.

Can we make this an episode?

Published by Thriftbooks.com User , 14 years ago
I really enjoyed the detail of the book and how it explored everything from a unique planet to Iraq. I could visualize everything occuring just as it does in the series. Having Daniel Jackson with the Atlantis team was even better. In addition, an interesting storyline was presented in regards to the Wraith DNA being in humans. This is a must read for any Stargate fan!

Published by Thriftbooks.com User , 14 years ago
Enjoyed this book immensely. Just when you think you know where the story is going, it goes somewhere else. A real page turner. These two writers really have the characters down pat.

Published by Thriftbooks.com User , 14 years ago
Stargate Atlantis: Blood Ties, I think is one of the best books in the Atlantis series. I like how Daniel Jackson, who is my favorite character, was put in the book. It was advertised as a non-crossover book, but it really was. The only thing I didn't like about the book, was the fact that the authors didn't mention where SG-1 was at the time. It would have been better if there was a brief appearance of SG-1 to explain their absence.
Copyright © 2022 Thriftbooks.com Terms of Use | Privacy Policy | Do Not Sell My Personal Information | Accessibility Statement
ThriftBooks® and the ThriftBooks® logo are registered trademarks of Thrift Books Global, LLC