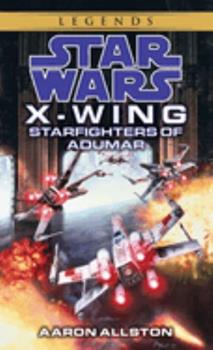 Book 9 in the exciting series The X-wing fighter pilots have earned their reputation as the Rebel Alliance's ultimate strike force by overwhelming enemies with their rapid-fire assaults. But now they are about to embark on a diplomatic mission that will prove to be even more hazardous than all-out combat.... The neutral world of Adumar has decided to pick a side in the war to control the galaxy. Delegates from both the New Republic and the Empire...

Stackpole is better, but these is amazingly great

Published by Thriftbooks.com User , 22 years ago
I still think that Stackpole is the King of Xwing, but these book is certainly a great one, it is full of thrilling battles and you find a good dose of humorous dialogue. These combination provides a plot that becomes intriguing and interesting, but stays fresh and dinamic. Other nice thing is that you do not need to read the whole X wing series before reading it, since the development of the plot and characters has quite an autonomy.

One of the best Star Wars novels

Published by Thriftbooks.com User , 22 years ago
I'm a Star Wars fan, an the parts I like best are the space battles. My favorite novel is the first of the series: Rogue Squadron. But the others disappointed me. That is, until Starfighters of Adumar was released. At last a Star Wars novel without a dozen of different stories mingled into each other.It has one plot, but it is well built, with a lot of unexpected shifts, and you never get the feeling you've already read this in another novel. It includes several interesting characters, a strange (mis)conception of Honor, and a characteristic Allston humor. I've reused a few of his phrases for myself ("I usually need a vote at the Senate or a planetary collision to make her change her mind!"). You wonder all along how Wedge will get out of a seemingly no-win (and worsening) situation, and when you find out there is still two major battles to go, each one involving several hundred fighters. Quite a rare event in Star Wars. You can trust an advise from an Antilles (that's me), it's really a good book.

Published by Thriftbooks.com User , 22 years ago
This book was hilarious. It was nice to see Wedge finally taken care of (I'm avoiding spoilers). It was also nice to see a Wedge being a rogue, and him having fun for once (and later kicking the bad guys' rears!). I think it's one of the best Star Wars books written. I love Mr. Allston was able to combine both his usual great sense of humor and a more serious view on everything, all the while introducing a new situation that our wonderful Rogues haven't gone through before. This is a great standalone book, however, I encourage anyone to read all of the books. It'll make more sense. Anyways, how can you say no to a good, funny book!

Read All About It!

Published by Thriftbooks.com User , 23 years ago
Packed full of all the humor and action of a truly honorable read.This story gives us a look on the characteristics of the relatively unknown pilots of the Alliance and gives us a well played out story plot for them to revolve around.Even if you haven't read the other 8, don't be discouraged,this is a book for everyone. It involves tense gripping dogfights in the sky and yes, even political problems are fleshed into the story. Don't worry though, humor is regularly fueled throughout the story:)

This is the best SW X-wing novel ever.

Published by Thriftbooks.com User , 23 years ago
Starfighters of Adumar is my favorite book in the X-wing series. Not the least of many wonderful things about it is that the entire book is from the point of view of Wedge Antilles. As a serious (nay, rabid) Wedge fan, I found that aspect marvelous. The story should please most SW fans; the plot holds up well throughout and has plenty of surprises. And despite having no misfit Wraiths for comic relief, the book still is full of the perverse humor and madcap action Allston did so well in the Wraith Squadron books. Wedge, Tycho, Wes Janson, and Hobbie arrive on Adumar feeling ill-suited for the diplomatic mission assigned to them, and find themselves on a planet with a violent and bloodthirsty culture where people will duel to the death -- with swords or in the air -- over the slightest of insults. Wedge is ordered to duel also, and kill people, to gain the "respect and acceptance" of the local government, but he refuses -- risking court-martial and disgrace -- because he considers it immoral. The story heats up into riveting battles, assassination attempts, and chase scenes, along with political sparring and even a touch of romance. The battles are well done, clearly described, tense and imaginative, and, different from any I've read previously. Fans of Wedge will find him magnificent -- cool, tough, heroic, caring, noble, brilliant, with all the "right stuff." How he wins back his One True Love is charming and will warm the hearts of those long waiting for Wedge to get a life outside of Starfighter Command. I would characterize this book as "Star Wars meets the Three Musketeers meets Mission Impossible." It's a wonderful read, with the fun, adventure, and swashbuckling camaraderie Star Wars was originally all about.
Trustpilot
Copyright © 2022 Thriftbooks.com Terms of Use | Privacy Policy | Do Not Sell My Personal Information | Cookie Preferences | Accessibility Statement
ThriftBooks® and the ThriftBooks® logo are registered trademarks of Thrift Books Global, LLC