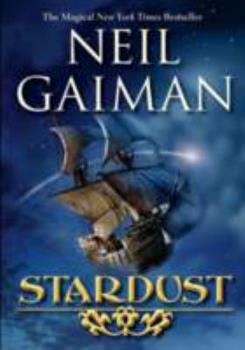 An enchanting fairy tale by master storyteller Neil Gaiman, full of unexpected adventures, true love, whimsy, wonder, and plenty of magic. Tristran Thorn will do anything to win the cold heart of beautiful Victoria Forester--even fetch her the star they watch fall from the night sky. But to do so, he must enter the unexplored lands on the other side of the ancient wall that gives their tiny village its name. Beyond that stone barrier, Tristran learns,...

It was just alright

Published by Grace , 12 months ago
I loved the movie so I figured I would love the book even more but I found it hard to get into. I read about 50 or so pages and haven't found myself really wanting to pick it back up.

Published by Socape , 1 year ago
I got the paperback acceptable. I expected rips and for it to be a bit beat up. But the pages in the book jumped. It would go from page 84 to page 213. Went up to page 244 and jumped to page 117. I’m missing pages 85-116. A bit disappointing. So I had to reorder it. From what I could read it’s a pretty good book.

Published by Miranda , 1 year ago
Great story. Modern fairytale with amazing characters. For those of you who've seen the movie, nothing is undermined. Theres just more to love. It includes Tristans childhood, growth into manhood and his adventures for true love even if he is a bit unsure about what that love is in the beginning. Also an amazing audiobook of you ever get the chance.

The book is great the condition is terrible.

Published by Thriftbooks.com User , 5 years ago
Fantastic novel! I'd seen the movie, but the book was just lovely! I highly recommend to any fantasy or adventure book lover. --On a side note: maybe don't include the $1.99 Goodwill Sticker on a book you sold for almost $4. I know it's business, but it's not good business to show your hand.

Published by Thriftbooks.com User , 13 years ago
Tristran Thorn would do absolutely anything to win pretty Victoria Forrester's heart. Even venture across The Wall into mysterious Faerie in search of a fallen star. But once he enters Faerie, strange things begin to happen. Tristran knows the location of every place in the land. He meets a strange, small man who gives him a candle that allows him to travel great distances. And when he finally finds the fallen star, Tristran discovers that it is not a lump of rock like he thought, but a young woman, who has quite the mind of her own. Tristran, though, isn't the only one looking for the star. The witch queen and a group of three brothers all want something of it. For these brothers, it's the power she possesses. For the witch, it's her heart. STARDUST was completely entrancing, charming, and a surprisingly quick read. The star's spunk and Tristran's humanity are both to be admired in this adventurous tale that will make you laugh out loud and break into tears. This is one book not to be missed. Reviewed by: The Compulsive Reader

Published by Thriftbooks.com User , 14 years ago
Fairy tales tend to lose their sparkle when they're made into books for adults. But Neil Gaiman creates his own sparkling fairy tale in "Stardust," an entrancing fantasy tale that never loses its magic. With beautiful prose, likable characters, and a mesh of the grotesque and the ethereal, this is Gaiman's reworking of fairy tales -- with a slight wink to the readers. Years ago, Dunstan Thorn fell in love with a beautiful slave from across the Wall. Nine months later, he got a baby boy on his doorstep. His son Tristan grows up unaware of his heritage, and longs for the beautiful, frosty Victoria Forester. When she rejects him, he makes a rash promise -- he'll pursue a fallen star over the Wall and bring it back to her, if she gives him her hand. But when he finds the star, he learns that it is a beautiful young girl, a daughter of the moon named Yvaine. The dying Lord of Stormheld threw a gem to the distance and accidently knocked her from the sky. Now his sons are trying to get the gem back, since the one who gets the gem will be the next Lord, and an ancient witch is pursuing the star, determined to cut out her heart. To protect the lovely star, Tristan is called on to be a hero, and to learn who he really is... Few fantasy stories are as well-done as "Stardust." Gaiman mixes humor, romance, grisly realism and airy-fairiness in a tight little plot. It only really picks up two-thirds of the way into the book, but what a trip it is. It slides rather than explodes to a conclusion, where everything slips into place and all the loose ends are neatly tied together, in a way that makes perfect sense. His writing is a mix of beautiful details and fast-moving plot. Gaiman frequently pauses to describe the creepy Stormhelm, where murdered ghosts watch their brothers compete, to the beautiful forests of Faerie where little sprites mock people. Some scenes -- like a unicorn's skewering a witch -- are breathtakingly vivid. Everybody loves an everyman hero, and despite his mystery background, Tristan definitely qualifies. He's a little goofy and a lot clueless, but his earnestness makes him likable. Yvaine is a bit off-kilter in a good way, sharp-tongued and a little naive, but a good match for Tristan. And supporting characters like the evil Septimus and youth-hungry witch are solidly written; even Victoria is shown in a new light. The beautiful adult fairy-tale "Stardust" is an entrancing read, wonderfully written and full of intriguing characters. An outstanding, timeless story, and sure to enchant readers. (Yes, even the ones who don't like unicorns)

Published by Thriftbooks.com User , 19 years ago
I loved reading fairy tales when I was a child, and I love reading them to my child now. Harry Potter is the closest I've found to a fairy tale that grown-ups will enjoy, but with this book (and others by this author) I've found a delicious fairy tale for the hungry adult reader.This truly is a fairy tale for grown-ups. It begins, "There was once a young man who wished to gain his Heart's Desire. And while that is, as beginnings go, not entirely novel (for every tale about every young man there ever was or will be could start in a similar manner) there was much about this young man and what happened to him that was unusual, although even he never knew the whole tale of it."There's a bit more to the story than that, and it isn't quite as simple as we're led to believe. Young Tristan Thorn from the village of Wall sets out with a mission and a certain amount of mystery about himself (that we're let into early on, if we pay just the slightest bit of attention). Like Gaiman's hero in Neverwhere, Tristan is a good-hearted young man with the best of intentions. He promises to leave the village of Wall, where he has lived his whole life, to bring back a fallen star for the woman he loves -- in exchange, she will grant whatever he wants (which is, of course, marriage as he is a charming Prince type guy, the kind you find in fairy tales.)What seems a somewhat simple adventure twists and turns into much more. Medevial times, fairies, unicorns, the moon, bad people (male and female) lead our hero on an exciting adventure and in the end he gets what he doesn't even know he wants.This is a gentle fairy tale for adults by an excellent storyteller.

Enchanting, Effervescent, Read in one gulp!

Published by Thriftbooks.com User , 20 years ago
"Stardust" won the Mythpoeic Award for best adult fairy tale. After all, fairy tales are not just for kids. And they're not for wimpy adults, either. Just read "The Hard Facts of the Grimms' Fairy Tales" by Maria Tatar if you don't believe me. "Stardust" has some pretty Grimm stuff in it too, however the only people who might not enjoy it are those who take Unicorns very very seriously. Or are extremely fond of billy goats.Gaiman's story begins and ends with a fair that will remind you of Christina Rossetti's "Goblin Market":"Backwards up the mossy glen/ Turned and trooped the goblin men,/ With their shrill repeated cry,/ "Come buy, come buy.".../ One set his basket down,/ One reared his plate;/ One began to weave a crown/ Of tendrils, leaves, and rough nuts brown/ (Men sell not such in any town);/ One heaved the golden weight Of dish and fruit to offer her:/ "Come buy, come buy," was still their cry."As Laura of "Goblin Market"-fame learned, it is better not to sample the merchandise at such Unseelie gatherings. Dunstan Thorn, who "was not romantic" learns this lesson too, when nine months after the "Stardust" fair, a baby is abandoned at the boundary between Faerie and the English village of Wall with his name pinned to its blanket. Thus begins the story of Tristan Thorn who is raised as a proper Victorian lad until age seventeen. Unlike his father, Tristan is romantic and at the bequest of the most beautiful girl in Wall, he sets out on a quest through the Land of Faerie to fetch her a fallen star. Not just any fallen star, but the one Tristan and Victoria both saw on the night she refused to kiss him."Stardust" is stuffed with stock fairy tale creatures who have been blown loose from their moorings and brought to life in the most wildly imaginative way. Some of them make only token appearances, but all are memorable. Two of the most poignant are the boy who is turned into a billy goat, and a billy goat, turned into a boy. There are three truly evil witches, and one who is only so-so wicked. There are....well, read the book. Even if you aren't drinking while you read it, you'll feel drunk by the time you finish. If ever there was a book that could be labeled, 'Drink me!', "Stardust" is that book.P.S. The cover has nothing to do with the story

Stardust: Being a Romance within the Realms of Faerie Mentions in Our Blog