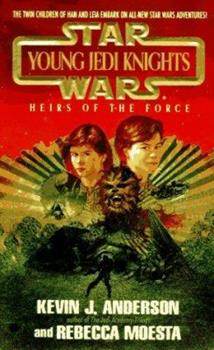 While exploring the jungle outside the academy, the twins make a startling discovery--the remains of a TIE fighter that had crashed years ago during the battle against the first Death Star. Mechanical whiz Jaina thinks she can repair it...if they can sneak the right parts out of the Academy. Meanwhile, their work is being closely watched--but not by Academy eyes. The original pilot, an Imperial trooper, has been living wild in the jungle since his...

Awesome continuation of Return of the Jedi

Published by Thriftbooks.com User , 18 years ago
This is a exciting continuation from Return of the Jedi.Han and Leia get married and have twin children,Jacen and Jaina, brother and sister. One day Lowbaca, Chewbaca's nephew, Tenel Ka, Jacen, and Jaina were in the jungel and found a crashed X-Wing Tie Fighter. As they search deeper into the jungle they found the pilot of The X-wing fighter and they all were scared because he was shooting at them. They knew that The Impire, Darth Vader, was evil and so if he was evil then his men were also. Tenel Ka and Lowbaca got away but Jacen and Jaina were stuck with the Imperial Pilot and they were slaves.Star Wars fans READ THE WHOLE BOOK!!!

Published by Thriftbooks.com User , 19 years ago
This is the first book in the "Young Jedi Knights" series. This book wasn't as fun as the others, but I still liked it alot.Jacen and Jaina are twins of Han Solo and Princess Leia. They are training to become Jedi Knights at their Uncle Luke's Jedi academy on Yavin 4. Jaina takes after her father: She is loves to tinker with mechanical stuff. Jacen has a special talent of speaking to animals,insects,or plants by using the Force.They have lots of adventures together with their friend Lowie or Lowbacca, who is a Wookie computer whiz, and Tenel Ka, who is a tough warrior from the planet Dathomir. (Tenel Ka is my favorite character!)In "Heirs of the Force", the friends, while exploring the jungle outside the academy, discover a TIE fighter that had crashed years ago during the battle against the first Death Star. Jaina thinks she can repair it with her friends. Unknown to them, the pilot of the TIE fighter is still alive in the jungle. He has been waiting to 'return to duty' for the Empire, he does not know that the Empire had been destroyed. The Imperial trooper captures the twins and forces them to continue repairing his ship.Will the twins be able to get away? What will happen if Qorl attacks the Jedi academy?If you liked this book, I'm sure you'll love other books of this series!

The title says it all...

Published by Thriftbooks.com User , 21 years ago
I'll start from the very beginning. The YJK series is a spectacular read for teens or for any Star Wars fan who doesn't mind the upper primary to middle school level reading. Hey, I'm 18 and I don't mind reading a young teen book because I LOVE THE STORY. It's a change from all the blood, gore, goose-chase plots, and meaningless sex that have frequented the shelves more and more. I own all 14 volumes in their original paperback form. ^_^ Great for passing by the time and relaxing or for a little Jedi-action - geared for teens of course. The series basically takes off where the Jedi Academy series ended -- with the introduction of the children of Lei and Han at the Yavin 4 Jedi Training grounds with Luke. Albeit it starts quite a few years later, but just the same...Heirs of the Force introduces the twins of the Solo family -- Jacen and Jaina, and their Jedi comrades -- Tenel Ka and Lowbacca. The story moves in different ways for different people. If you are like me and want a change from total slam-bang action and could use a little more descriptions, then you'll prolly think the beginning of the story is great. It doesn't move too fast I'll admit because Anderson and Moesta are introducing the people and places and the circumstances. TERRIFIC USE OF DESCRIPTION AND IMAGERY! If you're not all that familiar with Star Wars and didn't keep up with everything (I did! Star Wars forever!), then the long-winded intro may do you a little good. The existence of the Imperials (HA! Can't be missing for long!) are reintroduced by the means of a stranded Tie-fighter pilot and when Jacen and Jaina come across a wrecked tie-fighter and its pilot in the forests, they know that the Imperial forces may not be as dead as the Republic thought. And since this is a series, you just have to wonder exactly what's to happen next and how it correlates. And I assure you - it DOES correlate! The main ideas? JEDI TRAINING, CHARACTER AND SETTING DEVELOPMENT, AND SOME GOOD 'OLE IMPERIAL TROUBLE.The physical aspect of the book? I bought the book many years ago when it first came out and I am the proud owner of the first edition -- complete with the foil-embossed covers that gives it a super trendy look. David Dorman's cover artwork is AMAZING and I'll admit that in this case -- it's A-OK to judge a book by its cover! ^.^ If you collect Star Wars books -- this is a terrific series to collect -- not as hardcore, but still your Star Wars, BEAUTIFUL covers, and it's MORE JEDI! More from the teens' perspective that is. Perhaps this series is most powerful to the teen readers because all of a sudden with the intro of teen Jedi Jacen, Jaina, Tenel Ka, and Lowbaccca -- the fantasy of becoming a Jedi Knight seems closer to home... It doesn't matter how old you are -- you are never too old to dream!

Great start to the series.

Published by Thriftbooks.com User , 21 years ago
I read this book about a year ago, but I still remember it very well. Because the series (Young Jedi Knights) was all about Jacen and Jaina Solo, they were the first books to really develop their characters. Jaina is spunky and adventurous and has a real talent for mechanical stuff and for flying. Jacen's talent is communicating through the force with animals, and he keeps a collection of them in his room. In this book, when the series stars off, the twins are fourteen years old and have left their home on Coruscant to attend Luke's Jedi academy on the fourth moon of Yavin. The plot involved the two adjusting to life at the academy and making some new friends, including Tenal Ka, a warrior girl, and Lowie, a Wookie who is Chewie's nephew. Jaina's father, Han Solo, gives her a hyperdrive to toy around with, because she loves mechanical thigns so much. She finds the wreckage of a TIE fighter from the battle of Yavin when the first Death Star was destroyed. So she'll have her own ship with hyperspace capabilities, she decides to install the hyperdrive in the fighter. That's where the trouble starts. It turns out that the pilot of the ship has been hiding in the jungle for twenty years. He doesn't know that the Empire has fallen, and when he learns his ship has been repaired, he decides to steal it and return to his command. And he doesn't care if he gets the kids hurt or killed in the process. What I liked best about this book was that it was a Star Wars story in which the main characters were my age. You don't have to be a kid or teenager to enjoy the book, though. I think all Star Wars fans will find it entertaining if they don't mind the simpler writing style.

Published by Thriftbooks.com User , 22 years ago
When I read this book, I was a little too old for it, but still found it enjoyable. The characters are very well-created, and this book does not discriminate, the female characters are as strong (mentally and physically as the males) which is a very good quality in a young adult book. After reading it, I read it to my little brother out loud, and he was on the edge of his seat, and wanted me to "keep reading! Keep reading!" Also, he and I both agree, Heirs of the Force is the best of the Young Jedi series.
Copyright © 2022 Thriftbooks.com Terms of Use | Privacy Policy | Do Not Sell My Personal Information | Accessibility Statement
ThriftBooks® and the ThriftBooks® logo are registered trademarks of Thrift Books Global, LLC