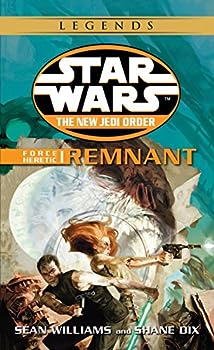 by Shane Dix and Sean Williams

This description may be from another edition of this product. As the bloodied and weary galaxy faces battle once more, the Jedi take on the formidable task of bringing the last of the Empire into the light. . . . From the ashes of the New Republic--torn to...

Published by Thriftbooks.com User , 13 years ago
I didn't get this far in the series yet, I am a slow reader. But what I've read and reviews I've read have nothing bad to say about the New Jedi Order series.

Published by Thriftbooks.com User , 18 years ago
Another great adition to this new and exciting series that star wars fans have gotten to enjoy. This book holds your interest for the entire book and leaves you wanting for more when your done. With its many plot twists and action packed battles this book is great for any reader. I reccomend it to anyone who enjoys the star wars series.

A good start, for a trilogy

Published by Thriftbooks.com User , 18 years ago
Victory is still a long way off. The Yuuzhan Vong have suffered there first major deafeat. Hoping to take advantage of this our remaining heroes undertake a dangerous mission on the old ship "Jade Shadow". They are off to find Zonama Sekot a living-breathing planet that once upon a time resisted Yuuzhan Vong invasion. On the first leg of their journey they encounter forces from the Imperial Remnant old enimes who must be helped in order for the galaxy to survive. Near animation of your way of life does indeed make for some strange bedfellows My impression-I had never read anything by Sean Williams and Shane Dix before so I was a little apprehensive. My fears were unfounded after a sluggish start. I was particularly interested in the character development of Nom Anor it was interesting to begin to watch him destroy the system that he had spent his life serving. Several characters seemed to have disappeared from the book althougher however. Where are Winter and Akkbar and the rest of the military brass? I realize that they are not the point of this trilogy but I would still like to know so that some of the loose ends could be tied up. Don't let this minor quibble discourage you however, this is still a great bookThe New Republic is deadLong live the Galactic Alliance

This book was GR8!

Published by Thriftbooks.com User , 18 years ago
I thought this book was EXCELLENT! For a quick summary, Luke, Mara, Jacen, Danni, and several others go on a mission looking for Zenoma Sekot. Meanwhile Han, Leia, Jaina, Jagged Fel, Tahiri, and several pilots go on a mission to find out which systems still support the New Republic. Before they leave something very strange happens. Tahiri goes missing then contacts Jaina and tells Jaina shes being attacked by Anakin Solo(who is dead). They find her unconscious. The same sort of thing happens on the first planet they arrive at (except for this time she starts attacking an enemy that doesn't exist. The only bad thing is you don't find out a crucial peice of information (its in the next book). I think this is a great book and you should try it out!

Excellent NJO Book! A great start to the Heretic trilogy!

Published by Thriftbooks.com User , 18 years ago
Following the events of NJO: Destiny's Way, the heroes of the Star Wars universe go on separate missions to find a way to keep pushing back the Vong invasion. I will not go into great detail for those who have not read the book, but the basic storyline revolves around the Solo twins, Jag Fel, Tahira and their respective mission personel. First I wish to state that I was a bit dubious about the Force Heretic trilogy. Destiny's Way did not reach my expectations for the series, but Force Heretic: Remnant pleasantly surprised me. It is the longest of the soft cover NJO books, in fact, it's probably the second longest of all the NJO books, but its exceedingly well written. Williams and Dix have a great grasp on the characters, and though the storyline moves quickly and is fluid, character development and emotion are not in any way compromised. It was good to see characters like Jaina and Admiral Pelleon written true to their previous characteristics. The Pelleon in Destiny's Way was a fat complacent old man, in Remnant, Pelleon has returned to the personality given to him by Zahn's books. In Destiny's Way, Jaina had taken on the characteristics of a cyborg which did not reflect the changes that had taken place within her during Allston's NJO books. The NJO characters who seemed to have been growing stale in Destiny's Way are rejuvenated by Remnant. It is a superior NJO book and clearly in the top five books of the series. I would definitely recommend this book to any NJO fans, and I look forward to the next 2 installments of this trilogy. The only complaint I have, is that important characters like Wedge Antilles, Lando Calrissia, Lowbacca and a few others do not show up in the pages of this book. However, this is understandable because of the directions Williams and Dix are taking the NJO in.
Copyright © 2020 Thriftbooks.com Terms of Use | Privacy Policy | Do Not Sell My Personal Information | Accessibility Statement
ThriftBooks® and the ThriftBooks® logo are registered trademarks of Thrift Books Global, LLC