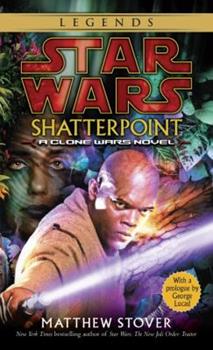 "The Jedi are keepers of the peace. We are not soldiers."--MACE WINDU, Star Wars Episode II: Attack of the Clones Mace Windu is a living legend: Jedi Master, senior member of the Jedi Council, skilled diplomat, devastating fighter. Some say he is the deadliest man alive. But he is a man of peace--and for the first time in a thousand years, the galaxy is at war. Now, following the momentous events climaxing in the Battle of Geonosis, Master Mace Windu...

"A New Hope" for SW literature

Published by Thriftbooks.com User , 13 years ago
For once, STAR WARS fans need not digest the bland formula writing that has characterized the entire Expanded Universe for years now. (I mean no disrespect to the likes of Timothy Zahn.) Matthew Stover leads the figurative next generation of fantasy authors, authors who are not afraid to dive deep into the frightening corners of the human psyche, while retaining the "swashbuckling" STAR WARS precedent. You will rethink the Force, and actually understand the role of the Jedi, while reveling in arguably the best fight scenes yet to be depicted on paper. Shatterpoint is a novel to die for, taking its reader on an intense and textured journey through the personified "jungle" of war's personal savagery. Mace Windu narrates his emotional mission to the jungle planet of his people, where he must face not only his own demons, but the power of a movement of terror. This conflict has evil on both sides, tragedy ranging from children killed to souls shattered, and true empathy. Stover has made Windu his own. Read with your whole spirit, and a notebook. We should always write when we read, whether the piece is tedious garbage or a revelatory and personal epic. Shatterpoint is the latter. NOTES: Please vote. Stover's other great Star Wars piece is called Traitor.

Published by Thriftbooks.com User , 17 years ago
This book almost made me forget Timothy Zahn is the best Star Wars author. I preferred this over any the New Jedi Order series and almost all the other EU books. Stover not only captures Windu's character perfectly, but weaves a very interesting plot with a fair amount of twists. Like Traitor, this book has a strong focus on the mentality of Jedi and the author's experience with martial arts as mentioned on the back cover, I think, has something to do with this. There a lot of really fascinating, original (I think) concepts introduced here too. For example, Windu is supposed to possess this extraordinary (even for Jedi) ability to perceive the "shatterpoint" of a situation -- which basically means he is capable of visualizing the sum total of all the influencing factors of a particular circumstance in all their subtlety and then deduce a precise action that he can take to completely alter everything. This is pretty much the main theme of the book and it is appears in a variety of ways, on a variety of scales. Excellent novel.

Published by Thriftbooks.com User , 18 years ago
This novel blew me away. I was reluctant to read it at first, since I usually rely on my pre-existing emotional attachment to the classic or NJO-era characters to buoy my interest in Star Wars books. I'm not a big fan of the prequels, and I had always thought of Mace Windu as basically a cameo role for Samuel L. Jackson in the movies.After only the first chapter of Shatterpoint, I found myself revising a lot of my opinions and preconceptions--about the book, the main character, the Jedi, the Force, and the Star Wars universe as a whole. Stover's stream-of-consciousness writing style grabbed my attention right away and pulled me emotionally into the plot. I often forgot that I was even reading--the narrative was so frank and immediate that I felt like I was there, in the story. The style alone could have kept me turning pages chapter after chapter. The plot and the details through which it plays out, however, are at least as engrossing and fresh. This is an unflinching tale of war that has more in common with the hellishness of Heart of Darkness (Joseph Conrad) or The Things They Carried (Tim O'Brien) than with other Star Wars books. Through its gruesome reality and constant sense of nervous anticipation, the novel examines the behavior of people under extreme stress and pressure. In the process, it forces a reevaluation of the psychology and purpose of the Jedi. The implications of this reevaluation beautifully weave together the events of the prequels, classic trilogy, and New Jedi Order.In the end, this is the most satisfying Star Wars book I have yet read. I would recommend it to fans of any eraof Star Wars, and equally to those who read the books for the action, the characters, or to better understand the Force and/or the morality of being a Jedi. Personally, I'll be looking for more Matthew Stover books.

Stover makes Star Wars his Own

Published by Thriftbooks.com User , 18 years ago
Want to save the franchise? Give it over to Matthew Woodring Stover, who takes a character heretofore only distinguished by the fact that Sam Jackson portrays him, and brings him to gritty, determined life, as a Jedi forced to confront all his assumptions as he enters his own Heart of Darkness.Mace Windu, Jedi Master, returns to the planet of his birth to unconver the connection between his old apprentice and some massacres during a bloody (is there any other kind?) civil war. He finds that nothing, including himself, is as it seems. Well enough plot...Stover creates a haunting, wholly believable view of what it means to be a Jedi in a world gradually devolving towards empire. His characters are vivid, filled with humanity and humor, and a maturity that makes this so much more than just a 'Star Wars' book.Stover does a brilliant job of showing us both the steel that makes Windu one of the most powerful Jedi Masters, as well as the humanity which in the end, will be the temporary downfall of the Jedi and the Old Republic.And it's hellishly entertaining. An unbelievable ride.

This ain't your daddy's Rebellion. . .

Published by Thriftbooks.com User , 18 years ago
My review in one word: superb. Shatterpoint is an excellent Star Wars novel, and an excellent start to the Clone Wars novel campaign. Although the book is significantly longer than Traitor, it's all from the POV of one character: in this instance, Mace. I wasn't sure how that would go when I started the book, because Mace, as far as I was concerned, didn't really have a character. He had a couple of lines in the films, but for most of the comics he was just kind of there, without a whole lot of personality. So I didn't really have a clear mental image of the guy. But it turned out well. He turned out to be a compelling character. I guess the Star Wars novel that this most reminds me of in terms of content is a much darker Courtship of Princess Leia. Just a thought. It was good seeing a Jedi actually using the Force. Too often, but not always, the Force is used in pretty unimaginative ways, when it's used at all -- it seems that some authors forget that it's there until they come up with a scene specifically designed to use it in some neat way. But it's used frequently and often quite imaginatively here. I also really enjoyed the action. Nothing as powerful as the Ganner sequence, but it wasn't as abstract, either. There were lightsaber fights, Force-fights without sabers, ground battles, dogfights, everything, all done very well. Some of my favorite Star Wars fights are contained in this novel. Pretty action packed. All done very well. Those of you who liked seeing Luke in action with two sabers . . . just wait till you see Mace. Wow. Also, this book has a great deal of the humor that didn't make it into Traitor. A few of the jokes were groaners, but there were quite a few good chuckles in there as well. Some of the characters seemed pretty stock, but most were well-done, and I'd like to see more of Geptun down the line. So as a Star Wars novel it's a good, thoughtful, action-packed adventure. But it's also a Clone Wars novel. And it also works on that level. Though the events of this book probably don't have a huge impact on the Clone War itself, this book was a good introduction. It really defines the role of the Jedi in the war, which is essential because, for better or worse, it seems that all of the upcoming CW novels are about the Jedi participants, and it also really serves to underscore the difference between the Jedi and the fundaments of the Jedi Order in the time of the Republic, as opposed to the Jedi we're used to seeing in the NR/NJO days. This book really helps to underscore both the differences and similarities between how the two orders operated and trained and thought and functioned. Of course, take this out of the GFFA, and it also serves as a war novel in its own right, going over territory familiar and less so about the rules of war, and the way war is waged, and the terror of war, and how no one really wins in a war, and all that kind of stuff. As far as I'm concerned, this book works on just about every level. Shatterpoint
Copyright © 2020 Thriftbooks.com Terms of Use | Privacy Policy | Do Not Sell My Personal Information | Accessibility Statement
ThriftBooks® and the ThriftBooks® logo are registered trademarks of Thrift Books Global, LLC