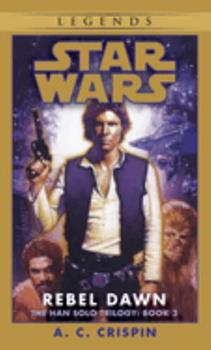 Here is the explosive conclusion of the blockbuster trilogy that chronicles the never-before-told story of the young Han Solo. Set before the Star Wars(r) movie adventures, these books chronicle the coming-of-age of the galaxy's most famous con man, smuggler, and thief. The Millennium Falcon is "the fastest hunk of junk in the galaxy." So when Han Solo wins it in a game of sabacc, he and Chewbacca become kings of the smugglers--uncatchable, unstoppable...

Published by Thriftbooks.com User , 19 years ago
After the classic Paradise Snare and the excellent but slightly flawed Hutt Gambit, A.C. Crispin ties everything together in the grande finale to the Han Solo Trilogy. The main complaint about this book seems to be that out of all the seperate plots, it's Han who recieves the short end of the stick, and in a way, this is true. While the Hutts have their power struggle and Bria is busy helping build the Rebel Alliance, Han basically bounces around on different adventures and side quests that have nothing to do with one another. In fact, for a few chapters he even disappears into the corporate sector, and we only get brief snippets about him. However, this doesn't mean the book is boring. Exactly the opposite, we see Han in situations that set up the movies and the rest of the expanded universe, including how he won the Falcon, his meeting with Chewie's family, why he dislikes the Rebel Alliance, dumping the Kessel Run spice, and why Lando hates him so much in Episode V. After reading this novel, it really puts a whole new spin on their confrontation in Cloud City, to the point where the viewer believes Lando is seriously mad at Han. As for the corporate sector interludes, while they do detract from the novel, they blend seamlessly with Brian Daley's classic adventures. Lucas has said that his prequel trilogy needs to be seen as a whole to be fully enjoyed, and the same applies here. Another chunk of the novel, like mentioned, revolves around Durga, Jilac, Jabba, and the Hutt power struggle. None of this has been mentioned before, so it's continually facinating. The Hutts are more fleshed out and articulate than they appear anywhere else, and the reader gains more respect for them. The relationship between Jabba and Han is expanded on, and thier meeting in the docking bay in the special edition makes more sense now; like a mafia don, Jabba was always friendly with Solo until he didn't pay him back. Also note another cool cameo, Prince Xizor and his droid replicant Guri. By far the best parts of the novel are the scenes with Bria. This character has truly come full cricle, from an insecure addict to a tough Rebel officer. To clarify complaints from other reviewers, A.C. Crispin does not try and make Bria the founder of the Rebel Alliance, but does make her the agent who persuades all the groups to talk to Mon Mothma and Bel Iblis, who then cement the idea and make the treaty. If I have to make a complaint, it's that Crispin delays the reunion between Bria and Han for too long, especially after the circumstances Han found her in during The Hutt Gambit. But when the characters finally do reunite, after the accusations and anger have been let out, their romance is rich and powerful, reflecting their years of seperation. It's worthy of a John Williams score, the "Luke and Leia" theme from ROTJ being particularly effective. After the novel ends and the reader finds out why Han and Bria are ultimately seperated, one can't help but feel that, before he fel

The End and the Beginning

Published by Thriftbooks.com User , 20 years ago
'Rebel Dawn' is another truly exceptional SW novel that carries the life of Han Solo right up the meeting at Chalumn's Cantina with a certain old man and farmboy. To say that 'Rebel Dawn' is a sort of a hsityor book is in many ways true, as it offers glimpses to the early days of the rebellion. Not that that's bad, at least not for me. I am a huge history buff, after all.Everything is wrapped up here, essentially. How Han gets Jabba on his case, Han's falling out with Lando, Bria's fate... Very, very nice and well-crafted so that everything fits together as one. Admittedly it's a rather sad book once you get to the end, but it accuarely paints Han's life and sets up his new life beautifully. Like 'Hutt Gambit', this book creates an incredible view into the 'other side' of Star Wars, far from the gallant dogfights above the Death Star and heroism of Leia and Dodonna. Here the Rebels are still struggling, and instead of a romantic space duel we get a ground invasion on the mudhole known as Ylesia. And you also het the tensions between the two Hutt clans at their height. Nothing like wars between crime syndicates, after all. Durga's relationship with Black sun also helped set up 'Darksaber', adding a little bit of background and credibility to Anderson's hopelessly absurd novel. Han's relationship with Bria was also quite interesting to watch, and its ending is certainly riveting. The final scene with Bria, in my opinion, goes down as one of the best all-time Star Wars scenes and fully captures the devotion of the early Rebel troops as they fought against all odds for a seemingly impossible goal. I must admit that I found the interlude where Biran Daley's novels go chronologically somewhat awkward, partially because I've never read Daley's novels and simply pieces bits and pieces of information about them together from various sources. Still, this is just a minor flaw in on overwhelmingly superb book.If for whatever reason you don't want to read everyting above, I'll simplify it here. 'Rebel Dawn' is an incredible piece of Star Wars history that adds background and depth to both Han Solo's life and the SW galaxy itself. Highly, highly reccomended.

Published by Thriftbooks.com User , 21 years ago
This book is the perfect ending for Han's young life, and a perfect setup for A New Hope. It ties in just right with the events we see in the movies, and answers some of the questions we fans have asked ourselves about the young Han Solo. It has exciting new characters while keeping in sync with the old from the films. The plot is fast-paced and exciting, and if you ever wondered about those spies responsible for beaming the Death Star plans to the Tantive IV, well, that'll be answered as well. A must-read for Star Wars fans.

Best of the Three

Published by Thriftbooks.com User , 22 years ago
Finally we get to see Han Solo in a recognizable form--the cynical, tough criminal with the soft spot for 2 meter furred bipeds. No more "one-woman-Pirate"--Han is as he should be, lovin' and leavin'. Seriously, though, the best thing about this book--and the trilogy in general--is the meticulous care with which Ms. Crispin researched the history of the character both in print and on-screen. All of the major events alluded to in other books (including Daley's seminal works) are in some way acknowledged here. Pick it up--it's a great climax to a good trilogy.

Everything you could ask for...

Published by Thriftbooks.com User , 22 years ago
I am somewhat cynical when it comes to Star Wars books. I've read most of them and at least half of them are a complete waste of time. NOT THIS ONE. In fact, the entire trilogy rocks. I think it equals the Zahn trilogy. All of the details of Han's life before Episode IV are revealed and surprisingly, none of them let you down. Enthralling...I literally could not put it down. And that's saying a lot for me. I was an English major in college and I've read a lot of good books and this is the height of Star Wars quality.
Copyright © 2020 Thriftbooks.com Terms of Use | Privacy Policy | Do Not Sell My Personal Information | Accessibility Statement
ThriftBooks® and the ThriftBooks® logo are registered trademarks of Thrift Books Global, LLC