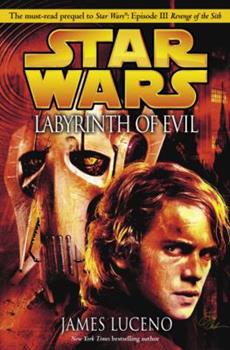 (Book #1 in the Star Wars: The Dark Lord Trilogy Series)

The war that erupted inStar Wars: Episode II Attack of the Clonesis nearing its boiling point, as the dauntless Separatist forces continue their assault on the teetering Republicand the diabolical triumvirate of Count Dooku, General Grievous, and their Master, Darth Sidious, fine-tune their strategy for conquest. InEpisode III Revenge of the Siththe fates of key players on both sides of the conflict will be sealed. But first, crucial events that pave...

Published by A Grey Jedi , 11 months ago
Only rating 1 star because I literally just haven't read it yet. Ordered the hardcover copy at "Like New" and the cover/jacket itself was indeed as advertised. However, when I opened the book, it took me a second to realize that it wasn't Labyrinth of Evil, but Jedi Trial instead. The book itself is still in good condition, but now I need the actual Labyrinth of Evil hardcover (without the dust jackets). Still looking forward to reading it though.

Sith Preparing for their Revenge

Published by Thriftbooks.com User , 14 years ago
After reading several books in the genre, I have come to believe that James Luceno is the best of the Star Wars writers. While some may credit this to the fact that he has better plots to works with, I suspect the fact that he adds depth to the characters from the movies is also a factor. "Labyrinth of Evil" is the perfect set up for "Revenge of the Sith." Beginning with Viceroy Gunray's careless blunder in leaving behind a holonet chair in an evacuation, the Jedi find themselves hot on the trail of the idenitity of Darth Sidious. In fact, the path leads them in the unlikely direction of Coruscant. But just as a breakthrough seems eminant, Coruscant fall under a surprise attack by General Grievous and the separatist army. With the abduction of the Palpatine, the dominos are in order for the conversion of Anakin to the Dark Side of the Force. While adding new dimensions to the charcters, Luceno does an excellent job of leading into Episode 3. Among the factiods that I apreciated was the backstory of General Grievous. Also, the story of the order for the clones is expanded. The Anakin-Padme love story is largely absent, but I am more than willing to accept its omission. Those who love the movies are certain to enjoy this book.

Published by Thriftbooks.com User , 14 years ago
James Luceno wrote the first book in my chronological re-reading of the Star Wars Expanded Universe, Cloak of Deception, and it was a wonderful five-star kickoff. Happily, Labyrinth of Evil does not disappoint in any way. Revenge of the Sith is my second-favorite Star Wars movie behind The Empire Strikes Back, so getting an entire prequel devoted to setting up the thrilling action of the film itself is a real treat. Revenge of the Sith starts in the middle of a gigantic space battle over Coruscant. The opening crawl summarizes why we are there and what has gone before, but there was so much story the movie didn't have time to cover. That's where Labyrinth of Evil comes in, letting us spend time with Obi-Wan Kenobi and Anakin Skywalker at the height of their friendship and their powers, before it all goes bad. After spending very little time with this duo during the Clone Wars books, it's almost a relief to get back to focusing on them and the other main film characters. This focus also makes the book very accessible, even to a casual Star Wars fan. On the flip side, Luceno makes a grand effort to weave in tasty tidbits of the EU throughout the tale, so dedicated fans will not be disappointed. The comics, books, and cartoons all get their due at various points, and he reaches way back to before The Phantom Menace to pull together what feels like the last step before we pitch over the cliff and fall into the Dark Times. The book starts with a long chase/action sequence on Cato Neimoidia, a planet we glimpsed during the Order 66 montage in Sith. This is an excellent example of how this book expands the scope of Episode III and kicks off some of the major plot threads of the film. Why did Darth Sidious choose that particular time to set his final plans in motion with the Separatist invasion of Coruscant? That question is abundantly answered in Labyrinth of Evil, and in a chilling scene, Intelligence officer Dyne gets to learn the full truth of exactly how high in the government the Sith influence goes. Good stuff. This book also works to put to bed some lingering questions from Attack of the Clones. The tale of Sifo-Dyas and his friendship with Count Dooku is sketched out by Yoda, although I would have liked more substance here. The mystery of who erased Kamino from the Jedi Archives is also answered. There is another source to examine in discovering what happened right before Episode III, and that's the superb Clone Wars cartoon. It tells a very similar story of the Separatist kidnapping of Chancellor Palpatine, although it differs in some key details. On the other hand, the book gives us an adventure with Anakin and Obi-Wan totally distinct from their trip to Nelvaan in the cartoon. Rather than try to forcibly reconcile the differences between the two, my inclination is to celebrate having both available and choosing which to consider your personal canon. In mythology, stories generally have the same nugget of truth at their core but can diffe

Published by Thriftbooks.com User , 16 years ago
An excellent prequil to the third movie. The first half of this book, admittably, starts off a little slow. Somewhere near the middle it fires up and intensifies. It goes in a pattern of 1)dividing the story: between the perspectives of Anakin and Obi-wan, and the of everybody else on Coruscant, and of course the villains; and 2)chapters of character developement, with plenty of pages of plot and depth that were left out in the first two movies. Want to know the origin of Grievous? It's in there. What about the plots of Sidious to rule the galaxy? That too. And, what about Anakin and Obi-wan following Dooku, and all the space battles in-between? Yup, all that too. A good buy. Just don't stop half-way in the middle.

Read this book, you must!

Published by Thriftbooks.com User , 16 years ago
I've read that George Lucas was in heavy collaboration with James Luceno in the writing of this novel, even going as far to give him the script for Revenge of the Sith and his notes. Luceno collaborated heavily with Matthew Stover, who is working on the Revenge of the Sith novelization. Now, even knowing this, the book still could have been bad. It wasn't. Labyrinth of Evil is quite clearly the best EU novel I ever read, surpassing Zahn's works and Salvatore's NJO debut novel Vector Prime. Luceno wasted no time tying up loose ends from the EU-prequel era and the movies, filling in the backstory for Revenge that Lucas doesn't have time to get on the big screen. Anakin, now a Jedi Knight, is shown near his breaking point, worn out by the war and the fact that he is being kept away from his wife, which is still his most closely guarded secret. Another major plus in this novel is the appearance of General Grevious. It was a real treat to finally see him make an appearance in the EU so we could finally get some depth to his character. I definitely could have seen this becoming a movie, but I'll just wait for Episode 3 now.
Copyright © 2020 Thriftbooks.com Terms of Use | Privacy Policy | Do Not Sell My Personal Information | Accessibility Statement
ThriftBooks® and the ThriftBooks® logo are registered trademarks of Thrift Books Global, LLC