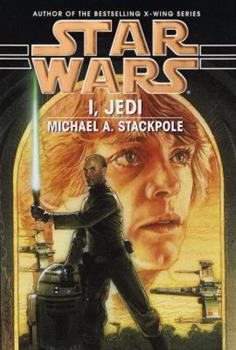 From New York Times bestselling author Michael A. Stackpole, one of the acclaimed masters of imaginative fiction, comes a stirring new tale set in the Star Wars universe, the story of Corran Horn, a heroic X-wing pilot who faces the greatest challenge of his life: trying to come to terms with his Jedi heritage and learning to use the Force--without succumbing to the dark side. Corran Horn was an officer in the Corellian Security Force before casting...

Published by Thriftbooks.com User , 18 years ago
The timeframe for I, Jedi surrounds the timeframe of the Jedi Academy Trilogy. Though the novel focuses around the poorly written Jedi Academy Trilogy, the book, I Jedi, is wonderful in its narrative and well developed characters. The novel also answers many of the questions that the Jedi Academy Trilogy does not answer. The novel is told in the first person point of view through the Rogue Squadron pilot and Jedi descendant, Corran Horn. At the beginning the novel he finds that his wife has been taken prisoner and the only way for him to save her is through developing his Jedi powers. The narrative focuses on Corran's experiences at the Jedi Academy and the teachings of Luke Skywalker. It is interesting to see what Corran's opinion on Luke's training techniques and the way he views how a Jedi should act. The novel's pace really picks up when Corran leaves the Jedi to find his wife. At that point in the novel, the character Taviria is introduced in great detail. Through her actions and views on situations, the characterization of the Imperial female commander, Taviria, is done so well that she becomes one of the most believable characters in the novel. What also makes this novel unique is that the author does not rely on most of the usual characters (Han and Leia) in this book. What the author effectively does is use the major Star Wars figures as a backdrop to the storyline. Only Luke is used as a major character with a lot of dialog.I, Jedi by Micheal Stackpole provides a unique look at how a Jedi is trained. Anyone interested in that aspect of the Star Wars universe would love this novel. This book is very well written, and I recommend it to anyone.

Published by Thriftbooks.com User , 21 years ago
I liked this book for a number of reasons. First, it's written well in the first person, which is sometimes hard to do. Second, it centers on a character who wasn't in the movies, former X-Wing pilot, Corran Horn. And this is probably the big reason why I went through this book so quickly, Star Wars is suffering from this sort of malaise that has crept into it whereby the only stories we get are about the primary characters. It was very refreshing to have a new character to explore with, what is more, Corran Horn, while larger than life and heroic, is still very human and ultimately likeable. I must admit that I was ignorant of the fact that he was basically one of the stars of the X-Wings, most of which were written by Stackpole, though I will read those as well. `I, Jedi' deals with just what it means to actually become a Jedi. Barring Lucas' foolishness of, unless you're a newborn, you're just too old to become a Jedi, Stackpole does an excellent job of chronicling not only Horn's stint at the Jedi Academy on Yavin IV, but the problems he encounters- both moral and physical. Mr. Horn is a married man, and yet he is deeply attracted to a female Jedi trainee by the name of Tionne, and must reconcile his feelings for her while remembering that it is because of his wife, (Mirax), that he is finally undergoing the training. It is also revealed that he has no aptitude for telekinesis, and thus cannot hurl objects or leap great distances. Stackpole constructs an elegant training program that tests Luke Skywalker's students. He also brings up what appear to be the author's own opinions on what it takes to be a Jedi. Corran Horn has come to Yavin to complete his Jedi training under Luke Skywalker to better aid him in his search for his wife, Mirax, who has gone missing while she was looking for rare artifacts to purchase. I was very pleased to find a male character who was so completely in love with his wife that he was willing to undergo a very dramatic transformation just for her. And still human enough to get the serious warmies for Tionne, the beautiful elf-like Padawan-learner. Like a child Corran questions everything, even Skywalker, and while the two are close friends it is obvious that Horn doesn't agree with the way Luke is leading the academy, but has the courage to tell Luke this then draw him into discussions on how to change things. There are several cameos by the main characters, even Star Wars fandom's beloved Mara Jade, whom as I have said elsewhere, is handled by Stackpole marvelously. As well, Stackpole finally gives Luke Skywalker his due - in the Zhan novels, Luke really was a wimp, he couldn't even take a clone of himself let alone the clone of an 80 year old man. In `I, Jedi' Corran sees just how competent the Jedi Master is in a fight with six Dark Force Adepts, all armed with lightsabers. This book pleased me to no end and I plan to read it again. I was hoping the Corran Horn would become th

Published by Thriftbooks.com User , 21 years ago
I unlike some others rather enjoyed this book. I thought that the first person perspective was handled very well. I also thought that it was a good idea to present the Jedi Academy series from a different point of view. The story itself is very good and Stackpole once again shows he is a master at conveying the feel of a fight through writing. This is one of his best novels and I was gripped the whole way through, so gripped I finished it in two days! If there is one thing I don't like about this book it is the fact it was released in hardcover a year before it was released in paperback. I know it isn't the first book to do this but it is kind of annoying seing it in a book store in hardcover and knowing you can't buy it because it costs too much. All in all this is a very good book and I would suggest it for fans of Star Wars and non-fans alike.

One of the best Star Wars novels I've ever read!

Published by Thriftbooks.com User , 22 years ago
This is undoubtably one of the best SW books I've ever read. And I've read almost every one that has been written. It is a wonderful book in itself, but it is ten times better to those who have read several SW books. The references to events in other works gives the story a depth that would be impossible to attain without the support of such a highly developed environment that the myriad of SW novels has created.It starts a little slow (like all classics) but it is worth it to set up the storyline. It is interesting to see the events of the Jedi Acadamy Trilogy through someone else's eyes. I'm a little disappointed with how Luke is portrayed, but that has nothing to do with this particular novel, that's just the way the character is. The second half of the book is a non-stop page turner. It never lets up till the climax. This is a must read for anyone who has any intrest in Star Wars.

Published by Thriftbooks.com User , 22 years ago
Fellow Readers, I have read nearly all the Star Wars novels and though many are forgetable, and a few downright awful, "I, Jedi" stands out as probably the best single Star Wars written book to date. The only books that come close are others written by Mike Stackpole, Timothy Zahn or Aaron Allston. The difference is that they are all part of a series, while this novel stands on its own. "I, Jedi", written in the first person, follows a fighter pilot (Corran Horn) who has recently discovered he has the potential to be a Jedi Knight. The sudden disappearance of his wife spurs him to embark on a journey to start his training under Master Luke Skywalker at his new training academy and use his abilities to rescue her. Unlike most books of this type, character development is included in spades as Corran is torn between his strong law enforcement background, his new Jedi instruction at the hand of an unsteady teacher and his desire to search for his wife rewgardless to his level of preparation. His journey has him seeking out his father's past and then infiltrating a band of mercenaries to gain information and access to his wife's captors. Expect personal reflection, detailed action and even some humor. While this book is excellent on its own, it alludes to events which happen in the deeply disappointing "Jedi Academy" trilogy by Kevin J. Anderson. Reading "I, Jedi" without the previous three books will probably leave the reader wondering about the outcomes of plots resolved in the trilogy. The only thing I disliked about the book was that it ended somewhat abruptly and all too soon. Enjoy!
Copyright © 2020 Thriftbooks.com Terms of Use | Privacy Policy | Do Not Sell My Personal Information | Accessibility Statement
ThriftBooks® and the ThriftBooks® logo are registered trademarks of Thrift Books Global, LLC