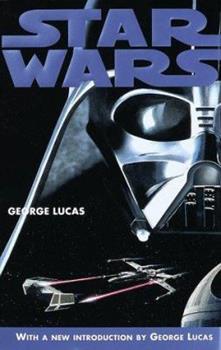 Finally, the novel of the movie STAR WARS is available with its original title ( STAR WARS: A NEW HOPE Luke Skywalker lived and worked on his uncle's farm on the remote planet of Tatooine--and he was bored beyond belief. He yearned for adventures out among the stars, adventures that would take him beyond the farthest galaxies to distant and alien worlds. But Luke got more than he bargained for when he intercepted a cryptic message from a beautiful...

An Ode Celebrating the Imagination in All of Us

Published by Thriftbooks.com User , 21 years ago
I walked into a small public library in Old Metairie,LA last summer. It was during the time of the Phantom Menace's highly anticipated release, and the the small but impressive library had erected an exhibit in Lucas' honor, showcasing various books written in the Star Wars tradition, including Timothy Zahn's highly acclaimed series titled Heir to the Empire (I've read the first one but would like to read the remaining two in the trilogy). Most of the covers exuded the typical Sci-Fi style corresponding to glossy, colorful covers with shiny, sleek battle cruisers plus exotic locales and mysterious aliens.But I noticed one that looked quite different: I walked up to the exhibit and noticed a rather medium sized grayish book with the faded spartan lettering on the cover: STAR WARS. Just STAR WARS. It reminds me of a classics book, which is not altogether strange since Star Wars, not only in our own era, but in the history of the humanities, is one of our greatest accomplishments, ranking right up there with Homer's Odyssey, Dumas' The Three Musketeers, and Melville's Moby Dick.All I can say is: Bravo, Lucas!

Published by Thriftbooks.com User , 21 years ago
If you love the movie, you will most definitely love this book! Everything that was in the movie is here plus much more! The prologue is great. It explains about the Senate and how Emperor Palpatine used to be a good guy. This was very valuable information for people who saw the movie when it first came out and it is still very interesting today. On a curious note, C3-PO was originally meant to be a greasy used car salesman type of character and reading this book, you will see how that is true. He is almost surly at times! There is also some very good dialogue in this which expands a lot on what was said in the movie. It is also interesting to note how the sequence of events is quite a bit different in the book. It jumps around quite a bit more. In conclusion, if you are a fan of the movie, buy this book! You will not be disappointed! If you are a sci-fi fan in general, read this book to see why so many love these classic adventures.

Easily One Of The Best Books I Have Ever Read

Published by Thriftbooks.com User , 22 years ago
I LOVE this book. I have always been a reader, but it usually takes me a long time. This book was easily finished in 2 days, just about a record. The detail just engulfs the reader. You can see everything. It's about 20 times better than the movie. Even if you are not a Star Wars fan, this book can easily make you one. The only downfall is that the famous "Help Me, Obi-Wan Kenobi" speech by Princess Leia has been altered. Even though, this book is an absolute must for any age. (I know, being only 16.) What else can I say? AMAZING!!!!

Published by Thriftbooks.com User , 22 years ago
This book is not just read - it is experienced. It beckons you to a whole new galaxy, a used, familar used past - a futuristic one.The characters of the movies that became the first cinematic phenomana are calling to you. Join them and their crusade, a long time ago, in a galaxy far, far away....

Published by Thriftbooks.com User , 23 years ago
This is the original book by George Lucas, the creator of STAR WARS. It is amazing that he put all this in his head before making the movie, one of the greatest of all time. This book is much like the movie, who almost every one has seen; the story of how Luke Skywalker helps an organized rebellion fight against the evil empire by destroying the Death star, an enormous, evil space station capable of destroying whole planets, but this book tells it in the way George Lucas originally envisioned it. It includes many things now seen in the special edition form of the movie, such as the Jabba the Hutt scene, which was originally cut for a lack of funding and time. The description in this book is excellent, and it puts you right in the action. The style is like you are an outsider looking in on the events through the characters eyes. It gives you feeling that you experience when getting caught up in the movie, with the exception of being able to know all that is going on around you. His vivid writing lets you see and understand the story better. This is one of the best Science Fiction pieces I have ever read. I recommend it to STAR WARS fans, Science Fiction lovers, and readers of good books alike.

Star Wars: From the Adventures of Luke Skywalker Mentions in Our Blog 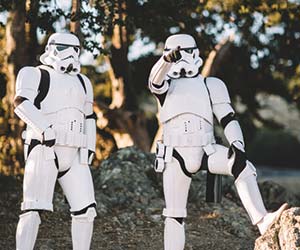 It's Star Wars Day in Galaxies Far, Far Away and Very, Very Close
Published by Beth Clark • May 04, 2018
To celebrate, we've gathered a few Star Wars reads, facts, fiction, fun, and more favorites for Rebel and Imperial fans of all ages.
Read Article
Copyright © 2020 Thriftbooks.com Terms of Use | Privacy Policy | Do Not Sell My Personal Information | Accessibility Statement
ThriftBooks® and the ThriftBooks® logo are registered trademarks of Thrift Books Global, LLC