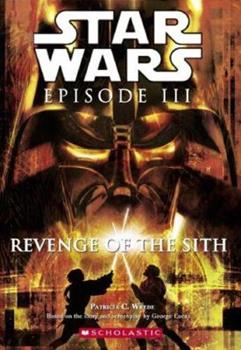 Published by Thriftbooks.com User , 16 years ago
This is a great comic adaption to the final "Star Wars" film "Revenge Of The Sith". Miles Lane & Doug Wheatley give a respectful presentation of the script from George Lucas. Like the other "Star Wars" comic adaptions, this ranks in second place, with the novelazation, as to actually seeing the films (nothing beats that). The artwork to "Sith" is outstanding & is the best since the "Empire" & "Jedi" adaptions. The only down side is that action sequences are limited & with some last minute film-tweaking by George Lucas, this usually means that the comic does or doesn't have something that was or wasn't in the film. In this case, deleted scenes from the movie "Sith" are represented here in the graphic novel (much the sameway that Jabba the Hutt's first appearance to "Star Wars" fans was in the comic adaption to "Star Wars" in 1977), while some action sequences, like the Artoo-Detoo/Battle Droid scuffle at the beginning of the film, aren't included in the comic. The deleted scenes include the birth of the Rebel Alliance & a small shot of Yoda excepting his exile on Dagobah. The artwork is great & represents the characters & the actors who portray them quite well. "Revenge Of The Sith" was originally released in a four part miniseries released by "Dark Horse Comics" with cover artwork done by Dave Dorman (which is also included in the graphic novel). I was lucky enough to purchase the limited hardback edition to "Revenge Of The Sith" & if you have the opportunity to pick one up, I highly reccomend it. "Revenge Of The Sith" is a great graphic novel that is one the best of the "Star Wars" comic adaptions and won't dissapoint.

The end is the beginning- the myth comes full cycle

Published by Thriftbooks.com User , 16 years ago
_I read the Dark Horse graphic novel adaptation before I saw both The Phantom Menace and Attack of the Clones. In both cases the adaptation was perfect- it was like seeing the story boards for the films. I am glad to say that in my opinion this third effort lives up to the first two. You can see the film in your mind. Not only that, but you can take time to really absorb all the intricate details from panel to panel. _I admit that I was a little nervous about how Lucas would wrap up the prequels. I didn't need to be, for this caps them off with the mythic power of the original films. I couldn't imagine a more powerful or fitting close. I sure that Joseph Campbell would have approved, also. We are shown the true nature of Evil, as well as, the true meaning of Good. There is no ambiguity here. _Personally, my favorite bit was the nod to shamanism and its role in preserving the Jedi tradition.....

Revenge of the Sith

Published by Thriftbooks.com User , 16 years ago
A little less intense than the adult version- although not by much- the junior novelization of Episode III tells the story very well. As pretty much everyone knows this is the one where Anakin becomes Darth Vader, so it's a given that this was a very dark book, more so than any other Star Wars book I've ever read. I think it's worth saying that there was almost no mention of Chewbacca and the wookies. Based on this, it looks like the role of the wookies has been severly exaggerated, which is a huge disappointment to me since that was something I was looking forward to in the movie. Overall, however, this is a great book that I'm sure you'll enjoy reading.

Published by Thriftbooks.com User , 16 years ago
This book was really good, and I'm an adult! LOL But teens will love this story, too! What is so great about reading the children's novelization is that it really follws what is supposed to happen in the movie more closely, and that is what's really great about it. The adult novelization gives you more insight into the characters, and it is fantastic, but this book follows probably what the script will really be like. If Obi-Wan says in the movie what he says near the end of this book, this movie will be heart-wrenching and amazing. Of course, even if he doesn't, there are dozens of other things in it to make the movie just as good. Anyhow, read this book as a supplement to the others, and if you're a kid, It gives you GREAT ideas of what the movie is really going to be like. A great read!

Published by Thriftbooks.com User , 16 years ago
Even at 96 pages it's hard to really adapt a full length novel and movie into a Graphic novel format but Dark Horse once again does their usual stellar job. This of course adapts the final part to Lucas's prequel Star Wars trilogy as the Clone War comes to an end and we see how Anakin Skywalker is seduced over to the Dark Side of the Force. The artwork of Doug Wheatley really made this work for me. Vibrant and yet subtle. The depth of shading and lighting was among the best I've ever seen and fits a sci-fi setting so very well. I mean just check out the rays of sunlight that filter down from above. It's just breathtaking! Wheatley did a magnificent job of capturing the essence of all the characters. If you really, really can't wait until the movie comes out then I definitely suggest you pick up this book. It's why I didn't give any spoilers away because I simply could not wait but didn't want to spoil it for others. Highly recommended!
Copyright © 2020 Thriftbooks.com Terms of Use | Privacy Policy | Do Not Sell My Personal Information | Accessibility Statement
ThriftBooks® and the ThriftBooks® logo are registered trademarks of Thrift Books Global, LLC