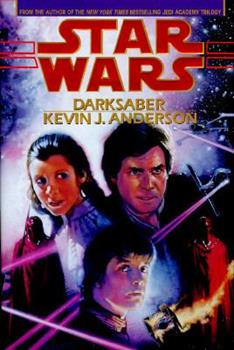 Luke Skywalker and Han Solo, cloaked by the Force and riding with the hostile Sand People, have returned to the dunes of the desert planet Tatooine in hopes of finding what Luke so desperately seeks: contact with Obi-Wan Kenobi. Luke is hoping the old Jedi Knight's spirit will tell him how to help his love, Callista, regain her lost ability to use the Force. Tormented and haunted, Luke cannot rest until Callista is a Jedi in the fullest sense, for...

Published by Thriftbooks.com User , 21 years ago
Darksaber was one of the best Star Wars books ever writen. Anderson keeps it moving along at a swift pace, it is one of the fastest paced Star Wars books there is. I loved the charecters of Lemelisk, Durga, Daala, and Anderson did a good job with Zahn's Pellaeon. I don't like Callista much, but that's really Hambly's fault. Oh well, had to include her somehow. The concluding battle of Yavin was probably the best space battle written into a star wars book ever, even better than Stackpole's books. All in all, a great read.

Published by Thriftbooks.com User , 21 years ago
I loved this book, and I would recommend it for any Star Wars fan. Lots of action, and the Callista/Luke relationship was well handled. Well done!

Published by Thriftbooks.com User , 22 years ago
Kevin J Anderson provides readers with classic Star Wars stories. It stays away from far out unbelievable plagues, clones, and ghosts which do not belong in Star Wars. Instead it returns to warriors, smugglers, and the Empire.

Published by Thriftbooks.com User , 22 years ago
this book. Every page is filled with wonderful writing and action. A must-read for anyone. Even non-Star Wars fans. Kevin J. Anderson, is, by far, the best Star Wars writer.

Published by Thriftbooks.com User , 24 years ago
I thought this was a good book but the plot could of been thicker. My favorite character had to be Admiral Daala. I liked how she united the Empire and killed the warlords. It was cool how she still escaped and beat Callista. I hope in future books she doesn't die because it is cool to know that part of the Empire is still there. The Hutt superweapon plot was pretty lame, but I didn't suspect that it crash into an astroid. I loved Luke's encounter with the one-armed Wampa. I think Callista Should of died in The Super-Star Destroyer Crash.Darksaber is a fast paced page turner that took me three days to finish and that is because I was busy and didn't have much time to read. It is a great book. Keep up the great work Mr. Anderson. P.S. I loved the executions.
Copyright © 2020 Thriftbooks.com Terms of Use | Privacy Policy | Do Not Sell My Personal Information | Accessibility Statement
ThriftBooks® and the ThriftBooks® logo are registered trademarks of Thrift Books Global, LLC