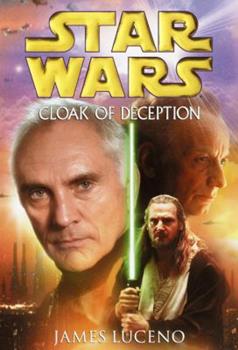 From New York Times bestselling author James Luceno comes an all-new Star Wars adventure that reveals the action and intrigue unfolding directly before Episode I : The Phantom Menace . Mired in greed and corruption, tangled in bureaucracy, the Galactic Republic is crumbling. In the outlying systems, where the Trade Federation maintains a stranglehold on shipping routes, tensions are boiling over'while back in the comfort of Coruscant, the hub of civilized...

Excellent Counterpart to The Phantom Menace

Published by Thriftbooks.com User , 15 years ago
What an awesome kickoff to the Star Wars Expanded Universe this book is! Luceno masterfully captures the prequel "feel" and spins a tale which deepens and adds layers to characters and plotlines presented in The Phantom Menace. The book could be characterized as a political thriller with liberal dashes of action sprinkled throughout. Cloak of Deception kicks off with a nifty echo of the opening sequence of The Phantom Menace (it was published after, although it is set before the film). Much like the start of the movie, the first few chapters are chock-full of shipboard Jedi action, Neimoidians, battle droids, and more. Luceno writes in a very descriptive style and does not take for granted that the reader has seen the Star Wars films, making for a stronger novel. Many characters from The Phantom Menace make their EU debut here, and there are also entertaining cameos from characters who play significant roles later in the saga, such as Lieutenant Governor Tarkin, Vergere, and Jorus C'baoth. Considering the book was published in 2001, it meshes well with the two prequel films released afterward. The Separatist commerce organizations of Attack of the Clones are all worked into the story by name, along with many of the bit-player Senators and Jedi. A sequence early on in the book takes place at the Coruscant Opera House, which marries up nicely (and quite accidentally) with the dialogue between Palpatine and Anakin that takes place there in Revenge of the Sith. I was most impressed by the complexity of the plot Luceno has woven. Palpatine and his alter-ego Darth Sidious pull the strings of virtually every character in the story. At times I had to step back and think through exactly what each character knew and what they didn't to see how Palpatine's plans were falling into place. One element I found a bit confusing early on is whether Palpatine had anticipated Qui-Gon and Obi-Wan's involvement in the Nebula Front/Trade Federation/Old Republic conflict he was brewing. Whether he did or not, though, it works to his advantage as the Jedi begin to get entangled in and compromised by the corruption and duplicity spreading through the government. Cloak of Deception fills out the "accusations of corruption" against Valorum that Palpatine mentions in The Phantom Menace and sets the stage for the forthcoming vote-of-no-confidence in Valorum's leadership. It explains why Sidious instructed the Trade Federation to blockade Naboo in particular and manages to breathe some life into the somewhat dry concept of taxation of trade routes being a key conflict driver in The Phantom Menace. Luceno does a great job bringing out and enlivening some of the murkier story elements from the first prequel film. His descriptive powers serve his story well and he leaves many tasty tidbits for serious fans of the EU to digest. This book is very highly recommended to anyone wanting a quality Star Wars read and especially highly to fans of the prequels.

Published by Thriftbooks.com User , 16 years ago
I'm a huge fan of the Star Wars movies and I was hungry to learn more about the worlds, characters, species, and interim events of this spectacular epic. So, I started reading the novels in chronological order, beginning with Cloak of Deception. I was not disappointed. Although I believe anyone can enjoy this novel, knowing the movies in and out makes reading this that much better. I was pleased to see the author delve into Chancellor Valorum's background, and describe what events occurred that eventually led to his political demise. Plus, to see how Senator Palpatine won the hearts and commitment from other members of the Galactic Senate made his meteoric rise to power in Episode I make that much more sense. And I couldn't help but smile when the dubious Wilhuff Tarkin was introduced into the mix of things. I could go on and on, but I don't want to give too much away. In short, if you are a person who loves Star Wars, likes novels centered around politics, or just digs a good adventure, read Cloak of Deception. I couldn't put it down, and I'd be willing to bet that you won't be able to either. May the Force be with you!

Great prequel to Episode I.

Published by Thriftbooks.com User , 20 years ago
I was very impressed with this novel from the very beginning through the end.After seeing Episode 1, I'm sure you and your friends pondered on how the Neimodians and Darth Sidious first got involved. How did the Trade Federation set up the blockade of Naboo? Just how did Queen Amidala become queen? How did Chancellor Vallorum become perceived as incompetent as to heading the Republic? And just who is this enigmatic young Senator Palpatine?Well this novel does an excellent job of setting the stage for Episode One. The double talk and blameless Palpatine shines as the master manipulator. We stand in the shoes of Vallorum and watch the invisible power plays consume his effectiveness as a leader. We watch the rise of Rune Hakao and Nute Gunray and their dealing with this cloaked figure who issues them a deal they cannot refuse.Was also nice to see more of the Jedi council in action. Mace Windu, Yoda, Qui Gon and even a younger Obi-wan in their attempts to bring peace to the galaxy.The majority of the story revolves around a plot and conspiracy to bring down Chancellor Vallorum as head of the Republic and stave off a boiling contention between the worlds of the outer rim and the core through trade routes, pirates, and taxation.New characters are introduced into the Star Wars mythos that are really exciting, and their actions, while at the time may seem innocent, set the stage for what will become the Empire....with everyone's strings being pulled by Darth Sidious.A few other characters make cameos including Bail Organa and A young Governor Tarkin.This is not your typical Star Wars novel. It is very deep in conspiracy, plot twists, and black ops. A very enjoyable read.

Published by Thriftbooks.com User , 20 years ago
Cloak of Deception is not only an exciting read, but it also nicely sets the stage for the events of TPM.Most importantly for Star Wars fans, this book explains what the vague "dispute over taxation" at the beginning of Episode I is all about. Much of the information to be found here would have improved the film as well, by more fully explaining the motivations of key characters and more sharply setting the tension. For instance, the fact that the dispute isn't really about taxes, but rather about (a) a nascent rebellion, (b) the reactions of both the Trade Federation and the Republic to growing anarchy and (c) political control over large portions of the galaxy is important to understanding the issues behind TPM. Of course, Palpatine's behind-the-scenes manipulation of everyone on every side is also interesting and illuminating. As a side note, I think that in TPM Lucas wanted to hide Palpatine's actions behind a veil of secrecy and mystery, a goal that was largely successful. On the other hand, Lucas was so successful that the film left us clueless as to what the political factions were debating and why the Trade Federation was making such a hostile play for Naboo. TPM as a stand alone film would have been better served if Lucas had cleaned up those plot lines a bit - even one or two lines explaining the dilema would have helped (it's all about motivation!). Cloak of Deception corrects that oversight.Perhaps just as important to the future development of the SW epic is Luceno's treatment of the rift among the Jedi regarding the nature of the Force. Luceno tell us that some (Qui-Gonn Jinn among them) adhere to the precepts of the "Living Force," while others (the majority of the Jedi Council) follow those of the "Unifying Force." In the interest of brevity and my unwillingness to spoil an interesting plot line for fans, suffice it to say that this book begins to explain why Qui-Gonn is somewhat of an outsider (his adherence to the Living Force) and how these conceputal differences have somewhat divided the council. I think that this philosophical difference will also tie in with the midi-chlorian thingies and the disappearing Jedi conundrum (SW fans understand those references).I'm not even going to outline the plot in this review - it's mostly standard dueling, space chases and other swashbuckling. As far as all of that goes, Luceno does a fine job balancing action, political intrigue and character development.Footnote: I think that reading this book will probably be as essential as watching TPM again before Episode II hits the screens. The political intrigue is bound to play a role in the next film, too.
Copyright © 2020 Thriftbooks.com Terms of Use | Privacy Policy | Do Not Sell My Personal Information | Accessibility Statement
ThriftBooks® and the ThriftBooks® logo are registered trademarks of Thrift Books Global, LLC