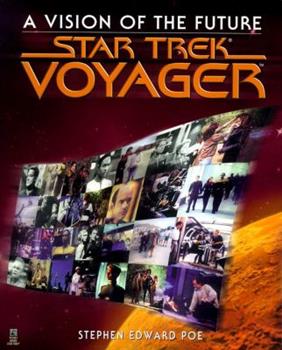 A Vision of the Future

From its inception, Star Trek: Voyager was destined to be a different kind of series. As the flagship program of the brand-new United Paramount Network, a great deal of attention would be paid to the new captain, her crew and their unique mission to explore the strangest new worlds ever. The producers, writers, actors and myriad staffers expected a challenge. They were not disappointed. Back in 1968, the mission of Stephen Edward Poe (then writing...

The people behind the show

Published by Thriftbooks.com User , 14 years ago
This is a book that probably should have been released in 1995, soon after Voyager started. I don't know why it was delayed until 1998. A Vision of the Future thoroughly documents the step-by-step creation of Voyager, from the first inklings of a plan for a series to follow TNG, through the initial broadcast of the first episode "Caretaker." Poe does a great job of showing just how seat-of-the-pants the creation of a TV series is, from adjusting to last minute cast changes (and hair changes), to having to deal with directives from on high that force a guerilla re-structuring of a story already in production, because the number of commercial breaks has suddenly been changed. We get to follow Poe, doing what we'd all have loved to do: wander around backstage without getting accosted by set security. We can vicariously talk to the crew putting everything together and find out the preposterous hours they work, see how things get put together behind the scenes, and find out why this or that thing was done the way it was. It really puts a human face on what can all too easily be looked at as a monolithic studio making just another piece of The Franchise. If I'd had this book early on in the series run, I'd probably have been significantly more forgiving toward Voyager than I was at the time. (I've since become rather more fond of Voyager than my initial reaction back then would have suggested... Maybe I'm just getting old?) Perhaps Voyager would have gotten a bit more warm welcome from the fans if this had been available on time. It's tough to say. The book being released three years into the series did allow the author to add a brief look at the addition of Seven of Nine to the cast and the effect that had on things, but that's really just an aside, not even a full chapter. As I mentioned, this book is really about the creation of Voyager the series, and Caretaker specifically, and it's extremely effective at that. (I also quite like the scattering of set blueprints that are reproduced in the book. After seeing the layout of the corridor set for example, it's somehow bizarrely entertaining to see how the cast keeps walking past the same sections again and again even in a single conversation -- and the fact that I never noticed it before speaks volumes about the quality of set design and cinematography!)

A must for the Voyager fan!

Published by Thriftbooks.com User , 20 years ago
As a fan of Star Trek Voyager, I found this book to be an incredible glimpse into how the show was created. Mr. Poe has done a wonderful job of exploring the "how's, why's, and almost's" of this often underrated series. After reading it I felt as if I actually was part of the Voyager creative process, that is how invitimg the authors writing is. A must have for the Voyager fan.

Published by Thriftbooks.com User , 21 years ago
A wonderful look behind the scenes of a great show. It makes you appreciate all the effort that so many people put into the details. The only thing lacking in this book is an index.

A must for Voyager fans

Published by Thriftbooks.com User , 22 years ago
I bought this book based on the reviews and they were right. This book is great! The photos alone are worth the price. If you love to read behind the scenes stories and are a Star Trek fan to boot, you will thoroughly enjoy reading this book. It gives you the insider's view of the making of the series to the point where you feel as if you were a part of the production.

Published by Thriftbooks.com User , 22 years ago
Being a Voyager fan I found this book very informative. It gives you insight into the lives of the cast and crew and how the episodes come about. Very detailed, I especially liked the cast interviews. Well worth a purchase if you are into Voyager.
Trustpilot
Copyright © 2022 Thriftbooks.com Terms of Use | Privacy Policy | Do Not Sell My Personal Information | Accessibility Statement
ThriftBooks® and the ThriftBooks® logo are registered trademarks of Thrift Books Global, LLC