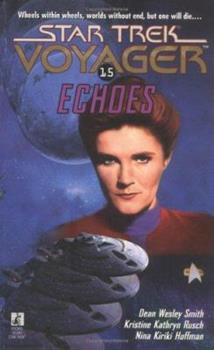 This description may be from another edition of this product. The U.S.S. Voyager finds itself in a system where a planet might have existed, but doesn't. Where the planet should have been, millions and then billions of people are appearing from nowhere and dying...

What got me into Star Trek Books

Published by Thriftbooks.com User , 17 years ago
This book was the very first Star Trek book I had ever read. Being a big fan of the Voyager series and having to travel a lot for my company I decided to buy this book to read on the plane. This book was absolutely fantastic. I like sci-fi that also adds some philosophical discussion or ideas to the story, and that is what this did. The idea of multiple dimensions and Janeway over a com-line with various versions of herself from those dimensions is quite intriguing to me. While this is by no means a new idea, I enjoyed the manner in which the story was told.Since my reading this (in 2001) I've read numerous other Trek Books and this is still my favorite.

One of the better Voyager books!

Published by Thriftbooks.com User , 19 years ago
For several years now I've been reading all of the Star Trek series books in order of release dates. That said, up to the point in which "Echoes" was released, with few exceptions, most of the Voyager books left a lot to be desired. That is certainly not the case with this book. "Echoes" is an extremely exciting book that at it's core uses the standard plot line - we're in the Delta Quadrant and we're short on this or that supply, we need to stop and find it - which has been pretty much worked to death by the previous "Voyager" books."Echoes" involves the Federation starship picking up some odd sensor readings, so they decide to investigate. Once Captain Janeway arrives, she and her crew are instantly involved in a tragedy so large in scale and magnitude, it seems almost unsolvable by one small ship. The residents of the planet have created a planet wide transporter system, and tied it into the planets core for power. This has disastrous results. Like clockwork, the transporter system kicks everybody on the planet over to the next "reality," "plane of existence." Where there's a planet, no problem, where there is not a planet, welcome to the vacuum of space. And so begins one of the more intriguing and better written numbered novels of any of the series!I highly recommend this book to any and all Star Trek and in particular, "Voyager" fans. Thank you to the authors for another great Star Trek read.

FROM AN HONEST VOYAGER FAN..

Published by Thriftbooks.com User , 21 years ago
I agree with the sentiments of most in here, especially Barry Nabbs, when I say this is a definately MUST READ for a Voyager fan. I too found it very reminiscent of "Year of Hell", and also had to keep flipping back pages to put together in my mind just which Voyager I was dealing with in that particular chapter. However, if you love Janeway and the way she aggresively takes command when the going gets rough, as well as her sensitive side, you really should read Echoes. it's a real treat because you are not only dealing with Voyager...but SEVERAL Voyagers with several crews. Actually this book reminded me of more than one episode. But still, its a great read. GO FOR IT!

Nice book to read in a day

Published by Thriftbooks.com User , 22 years ago
When I sat down to read this book I was very optimistic. Then I got into it and realized it had already exceeded my expectations for it. I Feel that this book is a great example of great stories for "Star Trek Voyager". I am also disappaionted that other people don't feel as highly about it.

This is an excellent book !

Published by Thriftbooks.com User , 23 years ago
I am an avid Star Trek book fan, as well as a fan of the alternate universe storylines. This book delivers. I wasn't able to put the book down, and found myself flipping through pages and pages just to see what would happen next. " Echoes " also gets the job done by showing the ' what - ifs ' and thinking process of the crew of the Voyager in all realities. I highly recommend this book.
Copyright © 2020 Thriftbooks.com Terms of Use | Privacy Policy | Do Not Sell My Personal Information | Accessibility Statement
ThriftBooks® and the ThriftBooks® logo are registered trademarks of Thrift Books Global, LLC