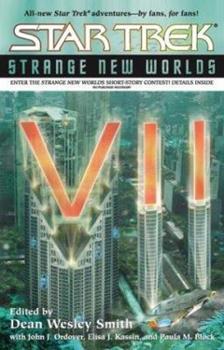 Fan fiction is coming up in the world...

Published by Thriftbooks.com User , 17 years ago
In this seventh edition of the Strange New Worlds anthology series, we once again have the winners of the writing contest Pocket Books does every year for Star Trek stories. Will some of these writers go on to become part of the stable of Trek writers for the ongoing series? Perhaps, though I don't know if any of the stories in here justify that completely. Still, there are definitely some good stories in here, well worth checking out. The stories are divided by the television series they are attached to, with another section called "Speculations." These are stories that are too broad to be tied to just one of the series. Perhaps it's something that spans almost all the shows. Or maybe they bring together elements from more than one series. The other two stories in this section of Strange New Worlds VII don't really fit this concept, however, as one deals with a Dax, from Deep Space Nine (though it is a future Dax) and one deals with Picard and the history of the Borg. Still, the stories are a bit broader than just "another adventure with the crew of the Enterprise," so maybe that's why. The grand prize winner was the Next Generation story, "Life's Work," by Julie A. Hyzy. This is the story of Data's creator, Noonian Soong, and the time when his wife finally left him because he was too wrapped up in his work. He was working on a final emotion chip that he would be able to put in Data when a crisis in his marriage happens. His wife, Juliana, has determined to leave him because he's more married to her work rather than to her. The weird thing is (as established in one of the Next Generation episodes), Julianna is actually an android that Noonian fashioned after his real wife died, because he couldn't bear to be without her. He made her a perfect copy of his wife, so much so that she doesn't even realize she's an android. He's understandably shocked when she tells him she's leaving, and it's a testament to his craftsmanship that he created her so perfectly that she has enough emotions to actually leave him. Hyzy captures the characters perfectly, especially during a poignant scene where Noonian has deactivated her to examine what's happening, and carries on the conversation with her that he knows he would have if she were currently activated. It's a touching story, compelling despite the fact that it doesn't have any of the regular Trek characters in it. Definitely worthy of the grand prize. The second prize entry is "Guardians," by Brett Hudgins, one of the "Speculations" stories. This story travels a *long* way into the future. It's about the Horta and how they've interacted with the Federation throughout the 50,000 year lifetime of the mother Horta. Eventually, humans leave the Horta home planet of Janus VI, and leave them alone (though the former head of the mining colony there does make regular visits to his new Horta friends). However, when a scientific station on the planet containing the Guardian of Forever (an ancien

All the stories are good, most great.

Published by Thriftbooks.com User , 17 years ago
It has finally happened: all the stories are good. In fact, the majority of the stories are great. The Original Series stories are really entertaining. "A Test of Character" and "All Fall Down" capture Kirk, Spock and McCoy perfectly. "The Trouble with Tribals" is a wonderful alternate viewpoint story. The Next Generation stories are just as good, but generally also quite sad, which I never find as appealing. The Deep Space Nine stories return to humour. The first story there is also about the weirdest presentation style since the "sentient story" earlier in this series. It works surprisingly well. The Voyager stories are good, but apart from "Redux" are below the high standard of the rest of the collection. Finally, the Speculations section has returned. The second story was good but not great. In the first story, "Guardians", the author absolutely went nuts depicting the future of the Federation, in sections rather than one go as in Volume 6. It was definitely one of the best. The third and last story, "Forgotten Light", was also about the origins of the Borg. It was quite thought-provoking. So, all in all - I really enjoyed this.

Published by Thriftbooks.com User , 17 years ago
Every year I count the days to the release of Strange New World. Each year I delve into the collection hoping to be capture by the amateur tails woven together by the wonderful editor Dean Wesley Smith. Each year I miss a night of sleep as I struggle to put it down. This year was no different. The grand prize winner this year was `Life's Work' is a wonderful tail of the final android that we know Dr. Soong created. Last year I questioned the grand prize winner but this year I am in full agreement. This creation was not the most original but was the best written summation this year. One story I personally enjoyed was `Full Circle.' It was a great return to the Captain of the Enterprise-B during the mission the Federation lost Kirk. Now he is involved in the mission that returned Kirk to save the Veridian people. This collection is one of the best in the last few years. My personal enjoyment in the group of stories is the ability for these fans to be great story tellers and select the smallest hook from the episodes to stretch out of. Pick up this collection and loose some sleep.

Published by Thriftbooks.com User , 17 years ago
The Strange New Worlds series is an outstanding idea - giving amateur/aspiring authors the opportunity to submit their own Star Trek short stories for consideration and inclusion in the book and to compete for 1st, 2nd, and 3rd place prizes. I was impressed by the quality of the work. It is not surprising that several of these prospective authors have gone on to become professionals. Volume VII continues the tradition of excellence. My favorite was the Second Place Winning entry "Guardians."

Published by Thriftbooks.com User , 17 years ago
Star Trek: Strange New Worlds VII edited by Dean Wesley Smith, with John J. Ordover, Elisa J. Kassin, and Paula M. Block is the seventh edition in the Strange New Worlds series. This collection of short stories is from the readers of Trek submitting their works for review. What makes this book interesting is that you get to read some of the early works of some very promissing writers along with some seasoned submitters of previous editions. Getting to read about what the readers think should be going on in the Trek universe is intriguing. There are seven submissions in the Star Trek Original Series, six submissions in the Star Trek: The Next Generation... included are the Grand Prize and the Third Place writing of the contest. There are two submissions in the Star Trek: Deep Space Nine section, while the Star Trek: Voyager section has four submissions. The Star Trek: Enterprise has one submission and the is a new category called Speculations with three submissions and includes the Second Place prize. There are some very inventive and interesting stories in this years crop of stories and I truly enjoyed them I hope you get a chance to pick up a copy for your library and you can later compare some of these stories to later ones written by some very promissing authors later in time as these writers compete for a writing contract with pocket books for future stories. The three prize winners and the ones that I liked the best are: "Life's Work" (Grand Prize) by Julie A. Hyzy "Guardians" (Second Prize) by Brett Hudgins "Adventures in Jazz and Time" (Third Prize) by Kelly Cairo There are other stories in this book that could have been winners of a prize as they were that good, but alas, there could only be three winners. If you like some off the common road short stories than this is your book as you can read a short story from this anthology before bed to get a quick fix of Trek. Enjoy these stories as I did and you can follow the progress of these writers in the future.
Copyright © 2022 Thriftbooks.com Terms of Use | Privacy Policy | Do Not Sell My Personal Information | Accessibility Statement
ThriftBooks® and the ThriftBooks® logo are registered trademarks of Thrift Books Global, LLC