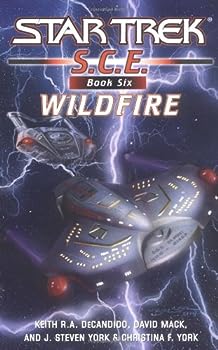 (Book #6 in the Starfleet Corps of Engineers Omnibus Series)

This description may be from another edition of this product. The Starfleet Corps of Engineers prides itself on solving the unsolvable, no matter what the danger. But this time the crew of the USS da Vinci might just have bitten off more than they can handle.

Published by Thriftbooks.com User , 13 years ago
This story does just about the best job I've seen of any Star Trek book of conveying the emotions a crew will feel during a disastrous mission when many of their crewmates die. I dock it one star because the threat itself seemed rather contrived and had a definite feel of "seen that before, been there, done that"; both the alien energy intelligences living in the gas giant atmosphere and the protomatter terraforming device have been done before, and I have my doubts that Starfleet would ever consider using such a thing. But the character interactions were perfect, and the heroism displayed by the whole crew, including minor characters, was a delight to see; this is what I read Star Trek for: the idea that human beings (and other sentient life forms) are capable of great heroism is somewhat passe in most other forms of literature these days, and I enjoy seeing characters responding to crises with competence and true heroism now and again.

Published by Thriftbooks.com User , 16 years ago
So I finished the latest SCE anthology Wildfire. Overall, it's one of the better books of the year despite some quibbles. Won't prattle on, so here's some thoughts on the individual stories. "Enigma Ship": An interesting tale of a completely holographic starship. Among the stories of the SCE, it's a pretty standard problem-solving storyline, but I liked the idea of a ship that's a whole hologram. All of the character work was pretty good and being a Trek ship nut, I really liked seeing one of the characters designing an SCE starship in his spare time. However, the ending got very muddled as to what happened and how it was resolved. "War Stories": A great little collection of stories about the crew of the da Vinci during the Dominion War. The unifying story about Biron going through the files of the crew to better understand them is fairly disposable and feels more like set up for some confrontation in the future. Of the four smaller stories within the novella, the last two dealing with Gomez and the da Vinci's mission to the communications array were my favorite. These two had the most sustained and descriptive battle scenes and were the most enjoyable. Bart's story was noteworthy for his first meeting with Anthony. "Wildfire": Leaving aside the fact that the whole plot is a complete rip-off of James Cameron's The Abyss, save for one crucial difference, the much talked about two-parter is quite good. It was interesting reading about a rescue ship that needed rescuing and there was good sustained tension throughout. I'm seriously not a person that thinks change for the sake of itself is really necessary, so I'm not entirely sold on the idea of wasting half the crew to "shake things up". The segment with the repeated scenes of death over and over again eventually deadens the impact it might have had i.e. any time a character's background or family was mentioned, you might as well as kiss that character good-bye because they're about to bite the dust. So the tragedy is laid on pretty thick, but I can appreciate the attempt to get more serious with the SCE, a series that has always taken more chances to begin with. Overall, a very solid batch of stories this time around. The SCE continues to be my favorite ship-based Trek book series. It's too bad that they're slashing the Trek book production by half, meaning we're going to have to just scrap by as the SCE paperback offerings will become increasingly meager.

one of the best but very sad.

Published by Thriftbooks.com User , 17 years ago
I haven't finish the rest of the book yet but i've read wildfire.the story was sad at the end.the da vince crew went to recover the orion.also in the middle on the story it went back to the past when duffy and stevens met.the past was mainly about duffy.book one and two told how the da vince and her crew struggle to survive.at the end of the book was extremmly sad.duffy went down to disable the warhead and it cost him his life.
Copyright © 2020 Thriftbooks.com Terms of Use | Privacy Policy | Do Not Sell My Personal Information | Accessibility Statement
ThriftBooks® and the ThriftBooks® logo are registered trademarks of Thrift Books Global, LLC