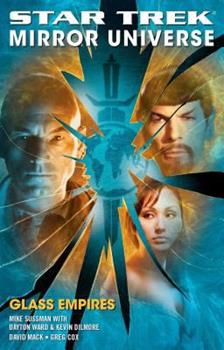 There are moments glimpsed only in shadow, where darkness rules and evil incarnate thrives. You hope against hope that in your lifetime, evil is relegated to the shadows. But what if it wasn't? What if you lived in a universe where your life was measured only by what you could do for the Empire? What would you do to survive? Would you sell your soul to free yourself? If you were offered the chance to rule, would you seize it? If you could free your...

Published by Thriftbooks.com User , 13 years ago
I really enjoyed how all three authors were able to weave together stories from both "universes" to make a completely new tale. It was a thoroughly enjoyable read for me.

Published by Thriftbooks.com User , 13 years ago
This was a gift for my husband and he is a huge Star Trek fan. He has been reading other books but has found this one to be one of the best that he has read in quite some time. He has requested for me to locate others that are equally as good.

Fun on the Dark Side

Published by Thriftbooks.com User , 14 years ago
The idea of counterparts, whether through cloning or alternate universes, has always been an intriguing and disturbing one. We like to think of ourselves as unique, but also that we were somehow meant to be the person that we are, regardless of circumstances. To meet a counterpart is to come face to face with what we could have become. Philosophy aside, the Mirror Universe is an entertaining one. We get to see the regular cast as enemies constrained only by power, free to manipulate and betray and even kill each other, or to work together in totally unexpected combinations. And, annoying as it is, there is just something sexy about evil. I am going to start with the last story in this book, as that was the first one I read. It is titled The Worst of Both Worlds - which unfortunately tells you the plot and main events right there. Since one can guess the main events, the entertainment value of the story has to be higher to compensate. Picard is a tomb raider, and the story begins with a wonderful Indiana Jones-style vignette. After that, it shows us what life is like for the Terrans under conquest, how Picard has managed to make a life for himself, and only himself, and how he gets involved with the resistance, to the extent that he does. The rest of the bridge crew does not appear, which I consider a missed opportunity. Also, there is a secondary story about the resistance mission that just isn't that interesting. It seemed more a chance to show the existence of a resistance than to do anything useful with. On the flip side, any meeting between a Picard and a Borg is a horror story, and this is no exception. That section was excellent. Then the story moves on to the big, doomed fleet battle. Considering the author, the combat scenes did not seem all that good. Also, perhaps I have role-playing games and ongoing campaigns too much on my mind right now, but when the author eliminated so many known characters, my main feeling was that he was limiting the possibilities for future Mirror writers. In addition, killing off established characters works well as a sudden shock, but not in a mass. All in all, this story was good, but not great, and not the equal of the other two. The book's first story, Age of the Empress, begins right after the conclusion of In A Mirror Darkly. It is a fast-paced action story. The situation is fluid, even chaotic. Whenever two of the main characters meet, you can never be sure if they are going to try and kill each other or become allies. It is very well written in all aspects, and does a great job showing how, in this dark setting, people that want to kill each other can cooperate in the long term. It is a very entertaining story and really establishes the setting of the Terran Empire. The second story needed that establishment, as that is one of the few things the story lacked. The author, despite all the details he gives, also seems to assume that readers have seen the original Mirror, Mirror episode. David Mack was

A Must Read! (Minor Spoilers)

Published by Thriftbooks.com User , 14 years ago
Okay, it's a rare occasion I enjoy a Star Trek book and even more rare when I get to the point where I can't put it down. This book: Star Trek Mirror Universe - Glass Empire is such a book. The premise is simple: It tells three different stories that take place in the mirror universe of each Star Trek series. The most interesting aspect of the entire book, all three stories told by different writers, is that they joyfully mine Star Trek history, each with a little overlapping among the generations. More than once I had to consult Star TreK to figure out where I remembered specific characters from. Let me break it down and discuss each part: Star Trek Enterprise: This story picks up directly after the Enterprise episode "In A Mirror Darkly" where the U.S.S. Defiant has been commandeered by Hoshi Sato, declaring herself empress of the Terran Empire. I have to admit, this story did not go in the direction I thought it would and that's unusual in the world of Star Trek where, thanks to so many hours of Trek, plots are rehashed over and over. The beautiful thing about the mirror universe stories are that anything can happen to anyone at any time. This story was a great story but for me, it was the weakest of the three which is far from a bad thing. The conclusion was extremely satisfying with the resolution of how the rebellion against the Terran Empire was quelled. Nowhere near a bad story and it holds up very well against most other Trek books I have read. Star Trek (The Original Series): This story surprised me the most. I was ready to skip it as I already knew from episodes of Deep Space Nine that Spock taking over the Empire is what caused it to fall, however, something told me to read through and I did. This installment is clearly the strongest and most thought out of the three. It follows Spock's rise to emperor and picking up from the end of the original "Mirror, Mirror" episode of the classic series up until the time of the movies, all the way to paralleling Star Trek VI: The Undiscovered Country. Saavik and Valeris show up in the book as well as lots of other fascinating (pun intended) Trek historical characters. All I will say about this one is that the fall of the Empire isn't because Spock made a mistake. Far from it. Star Trek: The Next Generation: After I finished the Spock story, I truly expected this installment to suck. Picard is an archaeologist working for the Gul who tortured him in the season six TNG two parter. I feared that they were going to do "Indiana Jones" in space but I was beyond pleasantly surprised. Within the first few pages, we see some supporting characters show up who were welcome indeed (Dr. Soong, for example) and once the storyline became clear, I was hooked. I won't spoil it for you but let's just say archaeology is not the focus of this story. This story had me riveted so much where they set up such a huge premise and with only about 20 pages left, I had no idea how they wer

The Mirror Universe - Part I

Published by Thriftbooks.com User , 14 years ago
Many Trekkers are familiar with the Mirror Universe, which was first glimpsed on the classic Star Trek episode, "Mirror, Mirror", in which Kirk, McCoy, Uhura, and Scotty were beamed into a parallel universe, which was like an evil twin of their own. Humans in this universe were barbaric, evil, serving the Terran Empire, instead of the Federation. This universe's Spock also sported a goatee, giving him a very different look from the regular Spock. Kirk and his team managed to escape back to their own universe, though Kirk urged Spock to work for change in the Mirror Universe. Spock claimed he would "consider it." - Now we finally see what Spock 'considered doing'. Over 25 years later, Trekkers saw a return to the Mirror Universe on Star Trek: Deep Space Nine, when a malfunctioning runabout entered the wormhole and sent Major Kira and Dr. Bashir into the Mirror Universe. Kira met her alter ego, who can charitably be described as a homicidal, bisexual, emotionally unstable, nymphomaniac. She also learned that the Terran Empire had fallen to the rise of the Klingon/Cardassian Alliance, which had enslaved all humans, turning them into laborers. The Mirror Universe became a story-telling staple on DS9, right through the 7th season. In this book, we see what became of the Mirror Universe's Jean-Luc Picard. But at the beginning of the book, back in the glory days of the Empire, set after the events seen on Star Trek: Enterprise's 2-part episode "In a Mirror, Darkly." This 2-parter had a unique position of being both a prequel, and a sequel - a prequel to TOS's "Mirror, Mirror", and a sequel to TOS's "The Tholian Web", in which the U.S.S. Defiant, same kind of ship as Kirk's Enterprise, disappeared into unknown regions. In the ENT 2-parter, it was learned that the Defiant ended up over 100 years in the past, in the Mirror Universe. Jonathan Archer led the I.S.S. Enterprise of this time period to the Tholian base that had captured the Defiant, and stole the ship, 100 years more advanced than anything that anyone had, planning to overthrow the Emperor. Things didn't exactly work out that way. This book details the subsequent events over the next year, which set the stage for TOS's "Mirror, Mirror" quite nicely. You may ask why I'm not going into much detail on the stories themselves - I don't want to spoil anything for you! This book is clearly intended for heavy duty Trekkers, such as me, but what a read! I read half of it in just 3 hours! My only complaint is that the events of this book are incompatible with the Mirror Universe trilogy written by William Shatner, and J & G Reeves-Stevens. But then, there were numerous elements to the Shatner story I didn't care for. But I won't know until the second installment in this series, if these books are incompatible with the "Dark Passions" 2-parter book, which details events leading up to the first DS9 Mirror Universe episode. Suffice to say, I've enjoyed this book immensely, and I don't want to wait ano
Copyright © 2020 Thriftbooks.com Terms of Use | Privacy Policy | Do Not Sell My Personal Information | Accessibility Statement
ThriftBooks® and the ThriftBooks® logo are registered trademarks of Thrift Books Global, LLC