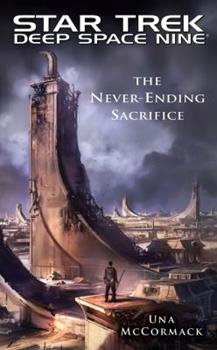 Continuing the post-television Deep Space Nine saga, this original novel shows the fall of the Cardassian empire as seen through the eyes of a young man with a foot in two worlds. Rugal is an orphaned Cardassian who has been raised by the people his race once conquered, the Bajorans. Reluctantly repatriated to Cardassia as a teenager, Rugal becomes the living witness to the downfall of the proud people to whom he was born, first by the invading Klingons,...

The title discribes the novel on several levels

Published by Thriftbooks.com User , 12 years ago
Wow! I too was captivated by Rugal's on-going story, although I (sort of) agreed watching the DS9 episode that he should go home to Cardassia. I was kind of irritated when, though realizing his birth father loved him unconditionally, he still wanted to go back to Bajor. But was so into the storyline, and it fits the teenage emotional level. U.M.'s writing is excellent. It sweeps along from one believable happening to another. It was so satisfying to see him mature, and stop thinking about his own issues,though heart-wrenching, to care for his grandmother, and then his neighbor during the war. I would have loved to have seen some type of reconciliation between Rugal and his father. But like the title says, there were never ending sacrifices--Rugal's, his father's, his adoptive parents, the Bajoran people's, the soldiers, the Cardassian people's, their brain washed children, the survivors of all the ravaged planets, and even the ones that weren't touched. I'll bet when you read this book you'll be able to find evidence of more. U.M. shows how families can be destroyed by cruel ambitions and bigoted people. Then we get to watch in triumph as they rally to survive, and even prosper. How beautiful for Rugal to create one family after losing two. I highly recommend this book. Hats off to U.M. for her fine writing.

Published by Thriftbooks.com User , 12 years ago
McCormack's writing focuses on what made DS9 so successful - it's great characters. Pros: -The dialogue is so well written, it felt like watching a new DS9 episode. -The characters are incredibly detailed and surprisingly good for a standalone novel. Cons: -Some portions, it takes a long time for a simple sub-plot to be tied into the main plot. -The ending is slightly melodramatic. First Hollow Men, and now this. I can't wait for McCormack's next book!

Published by Thriftbooks.com User , 12 years ago
The Never Ending Sacrifice was one of the best Star Trek books I've read. The story line was captivating. I couldn't put it down. Una McCormack should get an award for this one. The main character, Rugal, steals your heart from the very beginning. He's journey from childhood on Bajor, back to Cardassia with a father he never knew. He takes you through the Dominion War from a different perspective. I can't say enough about this book and I don't want to give anything away. A must read and enjoy!

Published by Thriftbooks.com User , 12 years ago
I generally dont like Star Trek novels that dont feature prominately the major characters in the given series an as a result it took me several attempts to get started with this book and while it is Star Trek pretty much in name only the story was engrossing and it was an excellent read. If you want a story thats a bit different for Star Trek I recommend this book. If youre looking for a good Star Trek story involving major characters try it anyway you will not be disappointed.

Exactly what a DS9 novel should be!

Published by Thriftbooks.com User , 12 years ago
This is just a fantastic book. Definitely in the tradition of DS9's best episodes and books! Reminds me a great deal of 'A Stitch in Time.' A breezy read, but in its way quite complex.
Trustpilot
Copyright © 2022 Thriftbooks.com Terms of Use | Privacy Policy | Do Not Sell My Personal Information | Accessibility Statement
ThriftBooks® and the ThriftBooks® logo are registered trademarks of Thrift Books Global, LLC