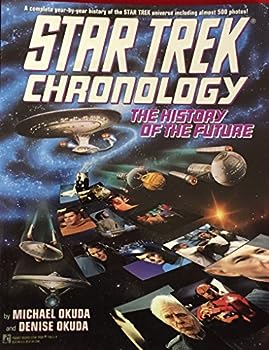 Star Trek Chronology: The History of the Future

by Michael Okuda and Denise Okuda

Chronicles the history of Star Trek. With log entries, indexed to actual Earth date calendars, the book details every event in the Star Trek legend - from Captain Kirk's birth and his tenure on the... This description may be from another edition of this product.

Published by Thriftbooks.com User , 13 years ago
The authors of this book certainly had a daunting task, namely to put all of the events in Star Trek: The Original Series, the first six Star Trek feature films and the first five years of Star Trek: The Next Generation in chronological order. Some of the events are mentioned only on passing in episodes, yet they have managed to tie all of it together into a surprisingly coherent whole. There are of course places where a consistent chronology is just not possible, and those situations are identified as such. Nevertheless, if you are a fan of Star Trek and are interested in what happened when, then this is the book for you.

An unique reference to Star Trek

Published by Thriftbooks.com User , 22 years ago
A great reference that starts several billion years B.C. to about one thousand A.D. This book has up to Star Trek: Next Generation First Contact, Deep Space Nine Season Four, and Voyager Season Two. One favorite section of mine is the alternate universes section with ALL of the alternate universes up to date. Now I'm waiting for an revised edition...

Published by Thriftbooks.com User , 24 years ago
As it says in the introduction, there are many contradictions and empty spaces in this history, but if there's a need to understand the way Star Trek works, it's an indispensable reference book. Also for writers who want to create between the time lines listed in the book, it is a very well organized tool, and when possible, it reveals the contradictions or problems found by the authors in conjunction with the original writers, so you can fill in the blanks of the history or propose new theories. Well, it's a must have for those REAL Star Trek fans!!!P.D.: if you want a perfect book, please read the I-Ching...

From the Big Bang to th 123rd century, this has everything!

Published by Thriftbooks.com User , 24 years ago
Everything I need to know about Star Trek is in this amazing book. The only problem I have with it is that I bought it when Star Trek Deep Space Nine was ending it's fourth season, and in the book, it goes up to the end of it's fourth season. I had no idea what was happening for two years! Oh well, now I know. Anyway, this book really helped me to understand the world of Star Trek, and the amazing thing is, that everything in this book has followed history so far! Anyway, I reccommend this book to any true Star Trek fans!

The final world on the chronology of the Star Trek Universe.

Published by Thriftbooks.com User , 25 years ago
This book is a must have for any serious Star Trek fan. It details the time-line of the often confusing Star Trek universe in careful academic detail, yet the narrative is entertaining enough to make it readable from cover to cover. The pictures are rife throughout the book and intelligently placed (a big gripe of mine is when people show you pictures of things you don't care to see, or put pictures far away from the text referring to them), and there are plenty of discussions about character designs, star ships, and other subtle nuances and contradictions that a book of this depth inevitably stumbles across. Buy it...it will make the Star Trek universe a bit more comprehensible...and a lot more enjoyable.
Trustpilot
Copyright © 2022 Thriftbooks.com Terms of Use | Privacy Policy | Do Not Sell or Share My Personal Information | Accessibility Statement
ThriftBooks® and the ThriftBooks® logo are registered trademarks of Thrift Books Global, LLC