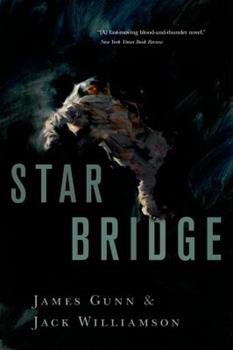 (Book #21 in the Utopia Classics Series)

The galaxy's inhabited planets are held together by the repressive Eron Company, the apparent holder of the secret to faster-than-light travel through the Tubes, the network linking the scattered worlds together. Mysterious parties have hired the adventurer Horn to assassinate the company's general manager, Garth Kohlnar. Horn completes his mission, and in the ensuing manhunt encounters Wendre Kohlnar, the daughter and now possibly the heir of the...

Published by Thriftbooks.com User , 12 years ago
I came across Star Bridge well over 20 years ago, and after college, could never find it again. Since I could not remember the title or auther, I spent the last ten years obsessing over finding it, and was thrilled when I stumbled on just the right Google search of my few memories of the book to find it. I was afraid that in rereading at this stage in my life, I would not find the book quite as engaging as I found it when I first read it. Happily, I was wrong, and enjoy this book just as much as I did when I first read it. It has definitely found a well-deserved spot on my shelf between Foundation and Dune. It is just a shame that it is not as well known (and of course, that the full epic series was never written).

Published by Thriftbooks.com User , 13 years ago
Like the previous reviewers, I discovered this book in my teens. It must have been shortly after it was first published. I have since re-read the book many times, and even had to buy another copy after my first one was lost. I have always regarded it as one of the best science fiction books ever written. It has action, heroism, romance, a thought provoking premise, a grand vision--everything you want in a science fiction novel. I just picked it up again, and found it to be just as fresh (and contemporary) as when I first read it almost 50 years ago. My brother loves the book too--we have passed our copy back and forth over the years. And yes, it would make a great movie.

Published by Thriftbooks.com User , 16 years ago
A great novel with (at the time) revolutionairy ideas of travel via 'wormholes'. The character is typical of Sci-fi writing of the time, and there is a leading character that has to be an early personification of 'Giles Habbibula'. Well worth the read, and great book from THE Grand Master of Sci-fi.

One of the all-time great SF books

Published by Thriftbooks.com User , 16 years ago
Why has this book never been made into a movie? It has it all...adventure, romance, a Metropolis-like futuristic empire, the idea of near-instantaneous space travel. Well, that part of the book was probably the inspiration for the original Star Gate movie. But this book's plot was much more coherent than the revolt against the sketchy, androgynous tyrant of Star Gate. The character of Wu is one of the best executed and most thoughtful in the history of the SF genre, IMHO.

This opened the door into hard SF for me

Published by Thriftbooks.com User , 21 years ago
I first read "Star Bridge" in sixth grade at the age of 11; I'm now almost 43, and I still hold this as one of the greatest SF books I've read.Williamson's imagery and wordcraft set the standard for many of today's modern masters. His antihero Horn, the eccentric man-with-a-secret Wu, and his decaying human empire are shown in high relief, and the imagery evoked burns itself into your mind permanently.Find and read this book; do what you must to acquire a copy, and savor it slowly. Horn's passage through the Tube and hyperspace is one of the most stirring examinations of consciousness I've yet to read; it still moves me.Find out why one man can move an empire...
Copyright © 2020 Thriftbooks.com Terms of Use | Privacy Policy | Do Not Sell My Personal Information | Accessibility Statement
ThriftBooks® and the ThriftBooks® logo are registered trademarks of Thrift Books Global, LLC