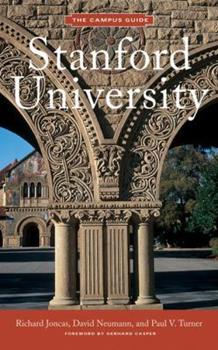 With the many additions to the campus of Stanford University since the publication of our book, including the Frances Arrillaga Alumni Center by Hoover Associates / The SWA Group, the James H. Clark Center for Bio Sciences & Bio Engineering by Foster and Partners / Peter Walker and Partners, and the Carnegie Institution by Esherik Homsey Dodge and Davis, it is time for a revised edition of our guide. The original 1891 campus, conceived by Frederick...

Stanford as a collection of buildings

Published by Thriftbooks.com User , 14 years ago
This is another volume is the Princeton series on U.S. universities, using a similar format: the campus is divided into "walks," with each chapter covering one walk and commenting on each building. As one reviewer here did not seem to understand, this is not the insider's guide to Stanford, nor even a full history of the University. That said, the reviewer made a telling criticism: in a campus defined by its setting, showing the buildings without showing the surrounding trees and open areas gives a false sense of the appearance of the place. When compared with other volumes in this series, "Stanford" is a little better than average. The entries are brief and factual, without the rather elliptical architecture speak that characterizes some of the Ivy League volumes. Most buildings are represented by a small photograph. There are a very few full page pictures. Based on the date of publication, this book was not written for the Princeton series, but was adapted for it. The maps appear to have been added more recently, and the method of presentation is different from the other volumes. Here, the buildings are considered not by location but by period, starting with the original structures (including ones destroyed in the 1906 quake) and proceeding up to the present. This means that adjacent entries are adjacent in date of construction, not location. Building 71 may be half a mile away from building 72. In the original publication, written for a Stanford audience, this was not a problem, but it may be difficult for those who do not know the campus. There are a number of errors in the maps, with some buildings not listed or not marked on the maps. Finally, a few entries seem wrong: Toyon hall is listed a dormitory for 150 men. Hmm... that's what it was when built, and perhaps (I doubt this) it is today. When I lived there 20 years ago, it was a dorm for about 230 men and women. Nice picture though. In fairness, the chronological approach is more logical, even if it makes it harder to read the maps. It allows the reader to see how building one structure can change the look and the traffic patterns of a large part of the campus. On the whole then, I recommend this book as a good way to see Stanford, so long as you understand the limitations of this kind of history. Just don't look for pictures of the tree or LSJUMB!
Trustpilot
Copyright © 2022 Thriftbooks.com Terms of Use | Privacy Policy | Do Not Sell or Share My Personal Information | Accessibility Statement
ThriftBooks® and the ThriftBooks® logo are registered trademarks of Thrift Books Global, LLC