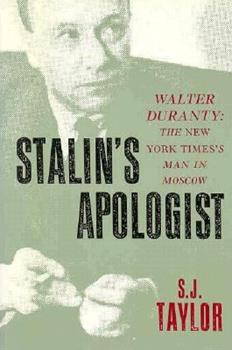 Short, unattractive, hobbling about Stalin's Moscow on a wooden leg, Walter Duranty was an unlikely candidate for the world's most famous foreign correspondent. Yet for almost twenty years his articles filled the front page of The New York Times with gripping coverage of the aftermath of the Russian Revolution. A witty, engaging, impish character with a flamboyant life-style, he was a Pulitzer Prize winner, the individual most credited with helping...

Portrait of disinformationalist whore, and traitor to his profession

Published by Thriftbooks.com User , 12 years ago
These past ten years have been something like a Golden Age for asleep-at-the-wheel journalism, but if Walter Duranty were still around, he'd be the revered old Hall-of-Famer this current reprehensible lot of talking heads and newsprint prostitutes would look up to. Apparently, it only took a little bit of wining and dining by ueberthug Joseph Stalin to get Walter Duranty to abandon his professional ethics and human conscience. For nearly twenty years, the reporter lived in Moscow, and traveled throughout the Soviet Union, witnessing first-hand a near-constant stream of newsworthy atrocities, with narry a discouraging word to report to the Times' subscribers back home. His tenure spanned the period when wave afer bloody wave of political purges transformed the Soviet republics into a spattered, dripping abattoir. Neighbors on his own street, people he knew, were hauled off for NKVD interrogation, torture, and eventual liquidation, while Duranty posted bland missives about production goals, inconsequential human interest blurbs, and fawning anecdotes about Uncle Joe. If he mentioned the showtrials at all, it was merely to parrot back the official Pravda line. There was never an attempt to verify the validity of the charges, or the justice of the verdicts. In 1933, Duranty stood face-to-face with starving human beings in the Ukrane -the direct and avoidable result of Stalin's ill-conceived collectivization program. Instead of seizing the opportunity to call the world's attention to a mass starvation, Duranty meekly recorded a "disappointing" harvest. Over the years, growing comfortable with a high society life few in Russia could even dream of, the correspondent fashioned himself into something of a PR man for a "worker's paradise" that never came to pass. Compounding the injustice, the Gray Lady's "man in Moscow" accumulated along the way a Pulitzer Prize, a Russian mistress, and a chauffer-driven limosine. I can't help but imagine that Stalin, on assessing the situation, must have thought to himself: "Gee, that was easy!"

Published by Thriftbooks.com User , 13 years ago
The book was a great deal of help,in writing a paper for school.What helped me more is the fact it got here so quickly,I'am still waiting for B & N to send another book I ordered. If you need to know anything on Walter Duranty,this book is what you need.

Fake reports from the New York Times is nothing new

Published by Thriftbooks.com User , 16 years ago
Duranty was not just the "NY Times man in Moscow" but an opinion leader among the elite press in Soviet Russia during the establishment and consolidation of the "Evil Empire" into one of the most monstrous blights to ever infect humanity. Taylor does a fantastic job of showing that Duranty not only assisted monsters like Stalin, but enabled him to commit a holocaust far bigger than Hitler's in his starvation of millions in the Ukraine,the imprisonment of millions in gulags which were death camps for millions more, and show trials that sent countless more to their deaths long before der Fuehrer showed up. Duranty was a drunk, drug addict, and depraved sexual deviant who was as ugly inside as he was on the outside. He destroyed and dismissed honest reporters who attempted to alert the world to the evils of the Soviet Union, and lied through his teeth while reporting on Stalin's show trials that resulted in a police state that still holds the record for death and depravity. And of course every time you see another NY Times reporter get another Pulitzer prize, you will find the one awarded to Duranty as proof that the rot at the Times goes back many, many decades. The Times has fought any attempt to take this award away, even though it was awarded for totally fictitious "reports" filed by Duranty. Taylor does a great job with this book and it should be required reading for any journalism course on how a big newspaper does not necessarily make it a great newspaper.

Published by Thriftbooks.com User , 19 years ago
Today, even the New York Times itself no longer praises Duranty or the Pulitzer prize he received for his false reporting from Russia for the Times. The NYT website admits on it's Pulitzer page that his reporting has been debunked by various sources. The fact that the terror famine in Ukraine in the early 1930's wiped out millions is simply not in dispute by any serious researchers anymore. What has not received in depth coverage, until now, is the major role Duranty's reporting played in shielding this massive horror from the rest of the world. The terror famine in Ukraine was one of the great crimes of the 20th century. Yet it has remained obscured behind other mass murders, such as the Nazi "Final Solution" and the "Killing Fields" of the Khmer Rouge. This book fully documents how this tragic omission from the mainstream historical record came to pass.
Trustpilot
Copyright © 2022 Thriftbooks.com Terms of Use | Privacy Policy | Do Not Sell or Share My Personal Information | Accessibility Statement
ThriftBooks® and the ThriftBooks® logo are registered trademarks of Thrift Books Global, LLC