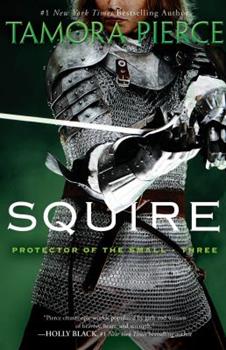 The third book in the New York Times bestselling series from the fantasy author who is a legend herself: TAMORA PIERCE. The path to knighthood is full of surprises. . . . Keladry of Mindelan dreams of becoming squire to the famous female knight Alanna the Lioness, but she worries that she will not be selected by her hero--perhaps not by any knight master. When Kel is picked instead by the legendary Lord Raoul, the unexpected honor shocks her enemies...

An adult fan of preteen fiction...how did this happen???

Published by Thriftbooks.com User , 21 years ago
First I need to defend the fact that I'm 23 and writing this review. I just want to point out that tamora pierce was around when I was a tween and a teen. Her books are so well written, I've just kept buying them.I would first like to commend pierce on writing a much longer book than usual. Her thanks in the authors note go out to JK Rowlings (and if you're unfamiliar with Rowlings I must ask if you've been living in a cave) who wrote and succeeded with a 700+ page book for kids. I have long thought that childrens (well, tween and teen books) were much too short. We need to give kids the credit due them and realize that they can sit down and read these longer books.Squire is the third book in the protector of the small series. Pierces protagonist is Kel (or Keladry) the first non-magic aided girl to want to become a knight of tortall (the only other being Alanna of Treborn--see her 4 book series for more info) and the struggles she faces because of it. Pierce deftly handles Kel's early teen years and honestly and frankly deals with Kel having a crush and then moving into kissing boys. She has Kel have a frank conversation about sex with her mother which I commend Pierce for again.There have been criticisms of the almost triangle in this book. I liked it...Kel is a normal girl. She likes one boy but can't help but notice and have a crush on another...ladies don't you remember being 12-15? I do...and it still occasionally happens...I'm in a relationship, not blind.Pierce writes her characters very well. They are well developed, (although cleon could be more developed and I hope he will be in the next book) and have personalities that are both believable and likable. I have read many adult writers who could not accomplish this, a major reason why I will continue to dart into the young readers section at my local bookstore and buy the new books as they arrive.

Published by Thriftbooks.com User , 21 years ago
I purchased "Squire" as soon as I could, knowing it would be a fantastic book, as Tamora Pierce's always are. I liked a lot of things about the book. For one thing, it was a longer than the others, which left more room for things to happen. It also gets a little bit more realistic as with what Kel has to go through. It isn't just getting bruised on the practice courts anymore. I also liked the aspect of the Chamber of the Ordeal giving Kel visions, and that the Ordeal was far more detailed than in the Alanna books. Kel grows a lot in this book and faces real problems: like the unfairness of the law, death, sex, taking care of a griffin she really doesn't want to take care of, and is reunited with Joren, her former bully. I loved Sir Raoul's return and I enjoyed meeting new characters like Dom and Lerant. There were a few things about the book that I didn't really like: The abscence of Neal was sad, but I could deal with that--this book is supposed to be her life, and in life, things change, people have to move away. I was upset at her growing romance with Cleon. He's a sweet guy but he never really was a developed character--it would have been kind of obvious if Kel hooked up with Neal (but it would have been much appreciated!), so it seemed the right choice to have her pair up with one of Neal's friends. But it seemed as though she didn't really WANT to be with Cleon, almost as though he kind of forced her into it (it probably would have been hard to say no to a sweet guy like him); while she was with him she still had feelings for Dom and Neal. That seemed a little bit weird. Kel had never had the fun-loving relationship with Cleon as she had with Neal, and even Dom. She seemed a little bit dazed when Neal was "going out" with the Yamani lady in waiting. But, who knows? The next book has yet to be published. Also, the characters of Daine and Alanna seem flat, not as they were in their own books. I hate having to wait for the next book, but if Tamora Pierce can write a finishing book as good as this one, I don't care how long it takes! :)

Published by Thriftbooks.com User , 21 years ago
I was very satisfied with this book. I can't wait for the fourth one to come out. I loved how Raoul was incorperated into the book. He was my favorite character in the Alanna series, beating out Gary, George, and Jon, by a land slide. There were more characters introduced both funny and annoying (Wait what annoying characters. What am I talking about).As I understand it many people are upset about Kel dropping her feelings for Neal and gaining feelings for Cleon (sorry about the spoiler.) but to be perfectly honest with you, I don't think a relationship with Neal would have lasted that long. You are supposed to have 2 best friends, one to love forever, and one to love forever - but only as a friend. Neal is the latter. Cleon on the other hand, is NOT a big, dumb, red-head. He's a sweetheart and I would give the world to find somebody who existed that treated me the way Cleon treats Kel. ::big sigh:: I could see that relationship coming in Page, when he told Kel that she looked fit, and with that random hug. (I must be reading these things too much. I predicted two relationships for this book last July. Kel and Cleon and Kel and Raoul.)Anyway, overall this book is great read. Highly recommended.

Published by Thriftbooks.com User , 21 years ago
Overall, this is a really good addition to the series. I would recommend this series to any parent looking for fantasy or any novels that feature a strong young girl that isn't about gossip, romance before its time and all those other "sweet valley high" things. The character starts in book 1 (first test) at 10 and by the end of this book is 17. This third book in the series is an improvement from the second mostly because the longer length allows for more plot development. The second book, Page, seemed very rushed to me. Now squire to Lord Raoul of the King's Own, Pierce isolates Keladry and plunges her into the duties of a squire. Kel's friends from the previous books are seen less frequently; while that comraderie was one of the most enjoyable points of books 1 & 2 it makes sense given what we've seen before. Squires go off with their lord knights & they don't see their friends as often -- we saw that with Prince Roald and Cleon in the second book. Kel's growing maturity is reflected by her increasing interest in boys. Her infatuation with Neal is rather abruptly replaced by interest in his cousin Dom (a member of the King's Own) and then with Cleon with whom she develops a kissing relationship. There is a glimmer of a conflict between Dom and Neal and her feelings for both but Pierce backs away from it to pursue this relationship between Kel and Cleon. My regret is now i have to wait another year for "Lady Knight". Meanwhile i'll be reading Tamora Pierce's "The Circle Opens" series.

Better than the last one!

Published by Thriftbooks.com User , 21 years ago
This is the most reacent book in Tamora Pierce's Protector of the small series. Now Kel is a squire and she has a new training master, one who is much more lenient on her. She can carry her Yamani glaive and he teaches new jousting skills. The Yamani princess arrives, Kel finds a baby Griffin and she meets up with all of her old friends again, including Neal of Queenscove. In short, because I know no one likes to read long reviews and to fit everything in this would be a LONG review, this is an excelent book from a renound author, who gets better with each book she writes.
Trustpilot
Copyright © 2022 Thriftbooks.com Terms of Use | Privacy Policy | Do Not Sell or Share My Personal Information | Accessibility Statement
ThriftBooks® and the ThriftBooks® logo are registered trademarks of Thrift Books Global, LLC