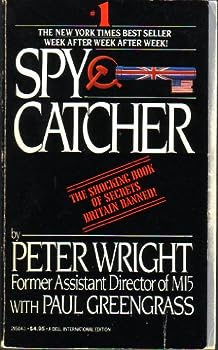 SPY CATCHER - The Candid Autobiography of a Senior Intelligence Officer

From the earliest days of electronic surveillance to the height of the Cold War, Wright was at the center of the action. This description may be from another edition of this product.

"Princeton is a pseudo-Gothic Cotswold..."

Published by Thriftbooks.com User , 15 years ago
If you've ever been to Princeton University, NJ and the Cotswold you'll realize how funny this quote from the book is. Besides interesting tid-bits like this, a more serious allegation by Peter Wright was that the Cuban Missile Crisis was a "set-up," a fabulous Russian disinformation effort in which the Russians actually won! Having lived through this incident I'm firmly convinced that he was right. You'll have to read about it to find out why. Overall, the book is one of the most interesting spy books I've ever read. It's basic, down-to-earth and showed MI-5 to be a disaster mainly as a result of activities by a few elite, upper-crust, rich, idealistic Oxford/Cambridge (Oxbridge)University homosexuals! All this started in the 1930's and moved into the 50's. What a mess! It also displays the courage of several men, mainly Peter Wright, to find the truth and act on it. Peter's boss, the head of MI-5, was a spy for Russia, but Peter was relentless in his effort to expose this fact. If you like spy books you have got to get this one.

Published by Thriftbooks.com User , 17 years ago
This is one of those books that I came to late in the game (It all started with the DVD "Cambridge Spies" last fall.), but after perusing the first page of "Spycatcher", I couldn't put it down for three days! One of the reasons that I waited so long was that various espionage writers have criticized the book for its inaccuracies (So he got the date of Philby's interrogation wrong!). I'm beginning to think that they are suffering from an overdose of sour grapes because Mr. Wright made the New York Times Bestseller List and they did not! I am actually glad that I read other books such as "My Silent War," "The Philby Files," "Anthony Blunt," "Philby: The Long Road to Moscow," "Crown Jewels," etc. first, because by the time I read "Spycatcher," I was thoroughly familiar with the multifarious cast of characters. However, as much as I enjoyed the other espionage books, "Spycatcher" surpasses them in one respect: it gives details of tradecraft that are impossible in an account of Kim Philby or Anthony Blunt who, by necessity, had to keep silent about the finer particulars of their work in intelligence (whether Soviet or British). Peter Wright lets the reader peek over his shoulder as he installs sophisticated bugs behind convincing false doors at midnight. He also gives the reader a good chuckle when such operations go disastrously awry and floors collapse or cables are cut, and the work has to begin all over again. The author also writes a wry account of brazen Russian agents importuning numerous passers-by in various London parks in an effort to "turn" them into Soviet assets, until the British police, at Wright's instigation, out-brazen the agents by threatening to arrest them for harassing Her Majesty's subjects. He also informs us of MI5's system of Watchers, who were posted all over London and its environs, and whose chief duty was to tail diplomats and cypher clerks from the Soviet embassy. (A memorable moment occurs when 105 Russians are declared PNG and expelled from Britain in 1971--an event I recall seeing on television). Peter Wright relates a particularly poignant anecdote of Klop Ustinov (actor Peter's father), who had served British Intelligence so faithfully and effectively (at great peril) throughout World War II, and who was living in penury without a pension until Wright brought the matter to the attention of the director (Wright was cheated out of most of his own promised pension at the end of his career, and Desmond Bristow of MI6 also tells of similar ingratitude on the part of the Intelligence Services in "A Game of Moles."). As for the allegations about Roger Hollis, the director of MI5, being a Soviet agent, the criticism of this theory usually cites the fact that Hollis never confessed, and therefore the charges are groundless. The same could be said of Kim Philby, who never confessed (despite Nicholas Elliot's claims to the contrary--with the window conveniently open so that the recorded "confession" was inaudible because

Published by Thriftbooks.com User , 17 years ago
Reading "Spycatcher", I was continually struck by this thought: how was it possible for Peter Wright to publish a book which exposes so much of the internal operations of Britain's MI5 domestic intelligence/security service? He names names, describes personalities in often unflattering terms, and details what were surely the most sensitive of investigations undertaken by MI5. What may be MI5's loss is the public's gain, as we get a rare glimpse at the very heart of a (by definition) highly secretive agency, charged with ensuring the security and continuance of one of the Western world's greatest democracies. Wright is undoubtedly a brilliant man, as are his colleagues (Wright describes how one of them does crossword puzzles completely in his head). Although the book opens with his retirement day, in which he shreds his diaries, he is somehow able to reconstruct the minutest details of operations that span his 20-year career with MI5, from the mid-50s to mid-70s, as well as critical pre-World War II events that he investigated for MI5. Wright is a radio engineer by training and original profession, and he joins MI5 as their first scientist in order to bring the benefits of technology to the agency. As MI5's top scientist, he is immediately charged with carrying out their most sensitive bugging and eavesdropping operations, which indoctrinates him into MI5's most secretive activities. Eventually, he leaves scientific advocacy behind to assume a role hunting down suspected Soviet spies within MI5 itself. Although Wright has many successes, he is never able to fully prove his most shocking assertion, which is that Roger Hollis, the head of MI5 for many years (and Wright's superior), was a Soviet spy. The circumstantial evidence Wright presents, however, is very convincing. Wright's analysis and the logic he applies are impressive because he not only looks at the various events themselves, but he constantly considers how events would have unfolded differently if his thesis were untrue. "Spycatcher" is a fascinating book, for many reasons. First of all, it takes the reader deeper within an actual government intelligence agency than almost any spy novel, and it has the added benefit of being true. The case against Hollis, and other spies exposed by Wright and his compatriots at MI5, serves as a warning about the fragility of security agencies: a few well-placed enemy spies can destroy massive amounts of work. Many of these top-level spies recruited by the Soviets were left-wing students at Britain's finest universities (Oxford and Cambridge), which shows how ideology expressed in an academic environment can lead to radical behavior and revolutionary actions. However, spying on potential domestic subversives is not a pleasant task, as Wright himself admits. "Spycatcher" also shows the special relationship between the U.S. and the U.K., which is not without its tensions. Finally, "Spycatcher" illustrates the need to fight back using man

Inside the British Secret Service

Published by Thriftbooks.com User , 19 years ago
Peter Wright was a former assistant director of MI5 (Britain's secret service or counter-intelligence). This is his story of his career, including his anecdotes about his American allies. He joined MI5 as a scientist who specialized in tools for espionage. He had been promised credit for his years as a civilian scientist. When this promise was broken at retirement, he wrote this book to even out things.This is an interesting book that can't be summarized in a few paragraphs. It is definitely worth reading for the details on government activities in a "democracy". Watergate was a notable failure of such activities. Do these activities continue? Of course!Pages 158-9 tell of his proposal for a "Bolshevik model" for former colonial countries: let a political party control the army and secret police so that neither the army or another political party could gain control of the government. He pointed out that only those newly created countries that adopted this principle have escaped military dictatorships and civil war.Does the above advice seem to cynical and radical? But our Establishment DOES control the army and secret police so that neither the military or a populist political party (one not controlled by corporate interests) can gain control.Yet the classic solution for democracies, from Aristotle to Machiavelli to our Founding Fathers was well-armed citizens and their militia. It has worked well for over over a century, and the idea still survives today.

Published by Thriftbooks.com User , 20 years ago
I'd been dying to read this book since I first heard Rosselson's song Ballad of a Spycatcher (basically the plot and best lines of Peter Wright's book). The book more than lived up to expectations. Although the style is sometimes dry and methodical, for the most part Wright takes the reader from the early "flying-by-the-seat-of-your-pants" stages of his work in counterintelligence as his branch of MI5 takes on a Soviet spy network 15 times its size, through the middle years when brilliant inventions and tactics are leaked to the Russians by an unknown, high-level source, through his heartbreaking autumn years when proving or disproving suspicions means long interrogations that can ruin the reputations of good men or let traitors slip away. Wright is a great guide through the arcane world of real MI5 work, and he has a splendidly British sense of humor that breaks the tension when needed. This book totally changed the way I thought of the British Secret Service.
Trustpilot
Copyright © 2022 Thriftbooks.com Terms of Use | Privacy Policy | Do Not Sell My Personal Information | Accessibility Statement
ThriftBooks® and the ThriftBooks® logo are registered trademarks of Thrift Books Global, LLC