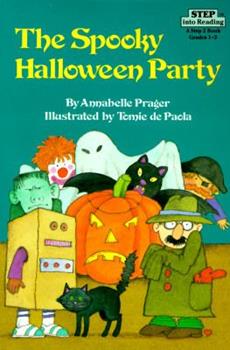 Illus. in full color. In a funny sequel toThe Surprise Partyyoung Albert is sure his friend's Halloween party can't be as scary as he says it's going to be. "Albert's bravado is dealt a swift blow when he finds himself among a host of party-going ghoulies who turn outnotto be his old buddies in disguise."--Booklist.??

Published by Thriftbooks.com User , 16 years ago
The Spooky Halloween Party should be a classic because childeren in different ages might enjoy it. Albert, the main character, thinks he knows who is in each costume but he ends up making a big mistake. It is very easy to read. It only took me a few hours. It's only up to chapter eight and it's only forty eight pages long. In the end Albert and his friends had a good time.

Published by Thriftbooks.com User , 21 years ago
This is a cute story about a boy who has moved to a new apartment and has to make new friends. He's a bit insecure because of the recent changes in his life, but then Halloween comes and no one looks like they're supposed to.. He thought he was too big to get scared on Halloween, but he finds out that's not the case!This story isn't really scary to read, so it's appropriate for young children. The reading level is not for just-starting-out readers. Some of the harder words in the book are as follows: either, point, know, invited, climbed, faraway, special, though.The text is big, and it's 48 pages. It's also a chapter book, so that's a nice encouragement for kids. There are only 8 chapters, and an average page has about 30 words on it. The pictures are nice, and the story is cute.I recommend this one for kids at the 2nd grade reading level, as long as someone is there to help with the more difficult words.

Published by Thriftbooks.com User , 21 years ago
This is a story about classmates, Nicky, Albert and their friends. Nicky is throwing a scary, spooky Halloween party in his new apartment. Albert told Nicky he is not afraid of anything. Nicky insisted this would be a scary party. Albert tries to come up with a really cool costume for the party and will try to fool his friends. Then the big night arrives and Albert meets his friends, or did he? Find out what happens to Albert and his friends after their encounter with a scary goblin and what really scares Albert.
Trustpilot
Copyright © 2022 Thriftbooks.com Terms of Use | Privacy Policy | Do Not Sell My Personal Information | Accessibility Statement
ThriftBooks® and the ThriftBooks® logo are registered trademarks of Thrift Books Global, LLC