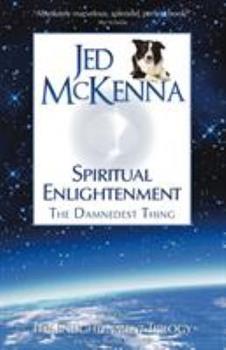 (Book #1 in the Enlightenment Trilogy Series)

From a Spiritual Master Unlike Any, A Spiritual Masterpiece Like No Other AUTHOR, TEACHER AND SPIRITUAL MASTER Jed McKenna tells it like it's never been told before. A true American original, Jed succeeds where countless others have failed by reducing this highest of attainments - Spiritual Enlightenment - to the simplest of terms. Effectively demystifying the mystical, Jed astonishes the reader not by adding to the world's collected spiritual wisdom,...

Published by Thriftbooks.com User , 13 years ago
I read reviews of this book, and they are as paradoxical as the book itself seems to be... at first read. Jed McKenna, fictional or non-fictional, creator of a work or simply a process that seems to be writing a book, is himself an enigma of epic proportions. If one stops at this layer with the book, the whole point is that there is no point except getting a good dose of irreverent and fun blasting of all the world's religions, new age thought, and science as an alternate religion. The book, however, defies its surface. Just as U.G. Krishnamurti defies explanation, the author and the book defy the layers of BS in which we shroud true spirituality. What is spirituality other than humankind's search for meaning and purpose in a seemingly purposeless and meaningless world? What is spirituality other than a search for Truth? For someone who had wandered through being raised fundamentalist Christian and subsequently converting to Hinduism, reading extensively in Chaos mathematics and Quantum Physics, searching through quasi-metaphysical works, and studying everything from Kabbalism, Gnosticism, numerology, and astrology to the Bible, Darwinism, and Relativity, this book served one purpose. That purpose... toss it on the fire (it provides valuable fuel) and keep going. After reading this book, I felt like someone had given me a golden key which unlocked all the goo and rephrased all my study into a brand new context. All of it and none of it points to the Truth of existence. I felt like Arjuna being stunned with the reality of my situation. To paraphrase, I too felt like I was just 'having a bad day at the office when the Universe flashed me.' Truth burns, and that is what makes this book so valuable. There is only one message in it, "Ask yourself who you are until you know." That is the whole of the book said succinctly and perfectly. Begin this process and never be the same. Blow off the layers of who you think you are until you know what you really are. The complete message of the book only serves to help the reader do one thing, look inward and ask hard questions. Done honestly with great intent, the questioning serves only to remove all the layers of cultural, social, and religious dogma, and what lies underneath is the greatest journey of discovery that one can ever make. If you truly want to know what the h**l is going on, this book is highly recommended.

Published by Thriftbooks.com User , 14 years ago
"My interest in self inquiry was sudden and unexpected: during an extreme "dark night of the soul" experience, I had a massive, catastrophic collapse which left me spent and speechless. This collapse was sudden, left me completely empty, with not even one ounce of resistance left, with no more answers of any sort, in a sort of cathartic and limp state. While I sat in this darkened, private library in the middle of the night, mentally and spiritually exhausted, in final dispair, with absolutely no clue on what to do with my next breath, much less the rest of my life, a most peculiar phenomena occured: sitting in absolute silence, I noticed.... thoughts.... arising to me. Mind you: these were no longer 'my thoughts". For some peculiar reason, in this stillness, it was spectacularly clear to me, that these thoughts, which were arising in the stillness of 'me', were not me at all, or, more specifically, that what I was had to be something quite separate from these thoughts. This was a profoundly unsettling awareness; in fact, it completely shattered my world. The only thing I was certain about was that I was uncertain about everything. Thus began this journey" Written under an assumed pen name, this book would be easy to ignore if it was not so damned entertaining while being so frightfully honest. 'Jed McKenna' is one of the few remaining Westerners I would enjoy meeting."

Published by Thriftbooks.com User , 14 years ago
I had a great time with this book. Jed has a wonderful, casual style that made me feel like he was having a conversation with me. He repeats concepts often through the book, like the stripping away of false ideas until you get at truth, but that repetition proved to be useful for me. Enlightenment is a notoriously squirmy subject, and sometimes it takes repetition to pin it as far down as you're going to without actually going through the work. One of the best focus points in the book is the description of the actual work that's required to become enlightened, assuming that's your goal. Whether or not you'd want to become enlightened is another topic in the book. Seriously, what's in it for you? Jed points out that if it's bliss you're looking for, there's easier ways to get it, and permanent bliss isn't the end result of becoming enlightened. Other than an entertaining foray into a sky diving experience, Jed McKenna stays close to the ground and gives a personal and engaging view of what it's like to be enlightened, to teach others, and to be surrounded by a culture of vegetarian seekers of pure love and generous spirituality. He never suggests that these people are in any way pathetic or misguided, but suggests that they may want to be careful of what they think they wish for. If you're heavily involved in the New Age movement or some religions, I guess it's possible that you may find some of the material indirectly offensive. If you have a fixed idea about what enlightenment is supposed to be, well, it may be a waste of time--stick with what you're comfortable with. Also, if you need a god-like authority figure to bow to (and the folks who recommend him in the first part of the book aren't enough recommendation for you to get you over the whole 'who does he think he is!' reaction) you can move along. Otherwise, recommended to anyone who wants to see one guy's take on the fuss is about, and if the fuss is worth it!

Published by Thriftbooks.com User , 14 years ago
It reads much like a novel which makes it a gripping read. Jed McKenna has boldly gone where few spiritual teachers have dared to go before. He clears out the erroneous beliefs surrounding enlightenment and clarifies what it really is. He is funny at times and portrays himself as an average man who happened to become enlightened. He's honest about the subject and there is no airs and graces. This book combined with another witty and powerful book by Keith Loy Finding Reality 'Awakening to Spiritual Freedom' will provide all of the clarity you will ever need on this subject.

Published by Thriftbooks.com User , 19 years ago
~Before this review goes any further, please accept this advice: Get this book! As soon as possible and by any means, read Spiritual Enlightenment: The Damnedest Thing. When you've finished reading through the epilogue, you'll either think that it was an interesting and entertaining book, or, if you "get it", it will radically change what you ~think~ is your life! You may be unaffected, you may be altered, but odds are strong that you won't be disappointed.Writing this review is risky. As the book suggests, what is written as "truth" today will seem silly tomorrow. Notwithstanding that, this review approaches SE:TDT from two very different points of view.From the usual, everyday perspective, the book is a wonderful experience, worthy of the time spent for anyone who enjoys reading books plucked from the "New Age" section regarding enlightenment, spirituality and various paths available to "seekers." As most reviewers have written, the author's masterful style, candor and wit make the book an enjoyable and provocative read. You'll take offense with the author's blunt condemnation of any practice other than self-autolysis (self-enquiry) only to the degree that you believe in what you've been doing so far. Some readers may find this approach unnerving and caustic, others may find it simply direct and pointed. The nits that some readers pick regarding the promotional blurbs, the cover image or title, or their disagreement with some of the beliefs and concepts in the text seem to be nothing more than red herrings, evidence of ego-in-action, and a wild miss from the point (or pointing) of the book. Rather, with approximately 30% of the U.S. population ready to make the shift to second-tier consciousness, it seems that Wisefool Press knows exactly how to target-market the book. This book was written for a specific audience, and they did everything they needed to do to get this book into your hands. (And guess what, folks; It's NOT about making money.)Look again. Read between the lines as well as beyond the concepts. See the recursive (but not paradoxical) nature of this book. If you have a thorn in your foot, you could use another thorn to remove it, then throw both thorns away. Use whatever "concepts" or "beliefs" are in this book as a tool to remove all your current beliefs, and then throw away both the beliefs and the book. Neither will be necessary anymore.For "No. Belief. Is. True." Including this one.So, from another perspective: This book does not exist. Without doubt, as several reviewers have speculated, a "Jed McKenna" does not exist. "You" do not exist and "I" do not exist. This review does not exist. Everything you think you are is illusory, and every belief you have is false...without exception. "Nothing that says two, not one, survives."With that understanding and the insight that "there's only one of us here", who wrote this book? (Pronouns fail miserably, here.) Read the following out loud, using "I" as a pointer to the
Trustpilot
Copyright © 2022 Thriftbooks.com Terms of Use | Privacy Policy | Do Not Sell My Personal Information | Cookie Preferences | Accessibility Statement
ThriftBooks® and the ThriftBooks® logo are registered trademarks of Thrift Books Global, LLC