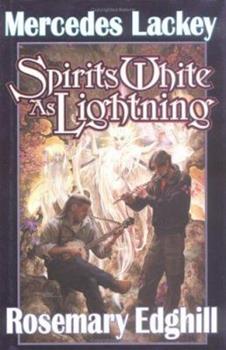 (Book #5 in the Bedlam Bard Series)

Eric Banyon has more to worry about than passing his courses at Julliard. The evil elf lord Aerune, whose love was killed by mortal men, is determined to destroy the human race. Eric's only hope of... This description may be from another edition of this product.

Published by Thriftbooks.com User , 18 years ago
I thoroughly enjoyed the latestEric Banyon adventure! For me itwas a page-turner. There was a lotof good humor, interesting characters (ie. Chinthliss, the dragon, a Fox with 9 tails, Elves from the Serrated Edge series, andan unlikely Bardic apprentice) andthe ongoing relationships betweenElves and humans. It's a great read, fast and funny.

Lackey and Edghill had me ROTFL (Rolling on the Floor Laugh)

Published by Thriftbooks.com User , 20 years ago
I loved this book. Why? Well, normal Mercedes Lackey books are all introspection and character development... By the end she usually has a GREAT Character and nothing to do with them. Don't get me wrong, I am in NO WAY Dissing my all time favorite author, but it seems that way to me.THIS book let these characters be in an environment that was fun and expositionary(sp?) They introduced them to such an extent that a new reader will want to find out more. I have met the characters from SerratedEdge before and was glad to meet them again, it made me want to find my old paperbacks and read the stories again.I am not one to EVER suggest anyone read a series of books without starting at the front and working toward the end... For the first time ever I want to suggest this fourth book to my friends to read FIRST in the series!Yes, it had a LOT of stuff taken from cartoons, Comics, DnD, and just plain Pop Culture... But THAT was the fun part. It is quite probable that Misty (Ms. Lackey) didn't know what Ms. Edghill was doing, since she claims to have missed a lot of pop culture in pursuit of writing. I had fun reading the book and picking out the pieces of Culture scattered freely about it, groaning at BAD jokes, and ROTFL at really GOOD Double Entendre.And given Misty's REAL history, I think this is her way of saying.. "Hey! This is ALL fantasy! There is no 'TRUTH' to it! If you believe in THESE guys, You will have to believe in THOSE guys too."Everyone has their own opinions. This is mine.

Elves at Juilliard and the Nakamichi Dragon

Published by Thriftbooks.com User , 20 years ago
Drawing on six or eight different traditions of magic and folktales, Mercedes Lackey and Rosemary Edgehill have poured it all in a magic cauldron and swirled up a terrific sequel to Beyond World's End. Where else can you find a blue-skinned Rick in Casablanca, or a fox with nine tails that sounds like a street huckster (wanna see what I got under da coat?) or a dragon whose main interest is his Nakamichi CD player. This book has nearly everything: gargoyles, good elves, bad elves, tyrannical music professors, and slow talking hillbilly musicians who turn into Bard Guardians. I _still_ wanna ride Lady Day. This book is complex, funny, wise, and a whacking good read.

Published by Thriftbooks.com User , 20 years ago
In one realm Sir Eric Banyon, known there as Silverflute, a Queen's Knight, is a hero who saved the world. On a more earthly plane, Eric is a Juilliard student flautist who flunked Introduction to Music Theory because he missed his midterm saving the world from Aerune. Eric attends summer school to make up the credits and stay in school Of course Eric has other activities intruding on his studies. These include a naming ceremony for his daughter Maeve and coping with being ripped off by his professor, a technical genius who has no earthly idea how to teach. This is next to nothing for Eric who has faced deadly enemy in combat, but remains unaware that Aerune and the Sidhe are plotting a rematch with a different ending. SPIRITS WHITE AS LIGHTNING is a humorous "Bedlam's Bard" tale that cleverly mixes ordinary life with fantasy elements. The amusing story line never slows down as old favorites and villains return for another world threatening engagement in between homework assignments. Eric is a complex hero who can save worlds, fail classes, and look at his infant daughter and seriously claim she looks like Winston Churchill sans cigar; this Queen's Knight makes the tale sing. Sub-genre fans who relish a comic fantasy romp filled with New York guardians and Vegas elves will join the chorus line of readers singing praise to Mercedes Lackey & Rosemary Edgehill for their latest collaboration.Harriet Klausner

Published by Thriftbooks.com User , 20 years ago
This book is the sequel to "Beyond World's End" and continues the story of Eric Banyon in New York with Aerune mac Audelaine returning as the villain. Most of the other characters are back also plus there are appearances by a few characters from previous books and from the SERRAted Edge series. There's one new major character in the role of Eric's first apprentice Bard. Despite the large number of characters, Ms. Lackey does an excellent job of weaving all of them into the story. The major sub-plot is well-integrated also and is highly entertaining, especially the visit to the Las Vegas elves. All in all this book is a pleasant read although I strongly recommend reading "Beyond World's End" first because this story is so closely tied to events in that book.
Trustpilot
Copyright © 2022 Thriftbooks.com Terms of Use | Privacy Policy | Do Not Sell My Personal Information | Accessibility Statement
ThriftBooks® and the ThriftBooks® logo are registered trademarks of Thrift Books Global, LLC