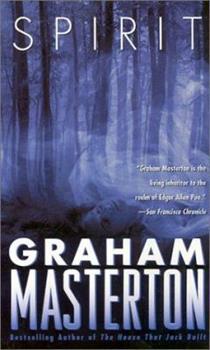 This description may be from another edition of this product. Little Peggy Buchanan is dead, drowned in the family swimming pool on an icy winter day. For her sisters, Elizabeth and Laura, it's a terrible end to their games. But when they recreate her image in...

Published by Thriftbooks.com User , 17 years ago
Since I just purchased two other Masterton novels (Trauma, The Doorkeepers), I thought it prudent to review the first work I'd ever read by him. Spirit, is a terrifying work from the opening scene to the end. It kept me captivated and interested throughout. This is one of those books that if you have children, your heart will begin to race from the opening bell. In addition, Masterton's prose is of the highest quality. Few other authors can even hope to match him. I'm just glad I came across his work; better late than never. Cody James Wolfe- www.authorsden.com/codyjameswolfe

Published by Thriftbooks.com User , 18 years ago
This was such a wonderful book! I was immersed in it from beginning to end and hardly put it down. Each chapter enticed me as I sped along to find out what was going to happen next. Graham Masterton has a way with words and you never know what to expect out of his stories. The unbelievable no doubt! I loved the fairy tale aspect in this story. It is like a deathly mutated version of the Snow Queen from Hans Christian Anderson. Definately not a read for your kids! The characters were great and you felt sorry for the bad guys. I cannot wait to read more of Masterton's work! He is a genius and under-rated. Stephen King doesn't have the guts to write like this man!

What good horror can be!

Published by Thriftbooks.com User , 19 years ago
This is one of the better horror novels of the last few years. Its the story of a family who unravels after the accidental death of the youngest daughter, Peggy. Each person is guilt and grief stricken, and after the girl comes back from the dead, they fall apart. I won't give away too much so I won't go into the plot, but this book was great. Each character is well drawn especially the older sisters, Elizabeth and Laura. The thought of anyone coming back to haunt is frightening but when you have such a frightening spirit as this, it will keep you looking over your shoulder.The premise of the story was a little unbelievable, but in Masterton's deft hand, it takes on a life of its own. This is a ghost that is completely different than most you read about and probably more frightening. This reminds me of horror novels from the earlier part of the century being that it doesn't rely on shock value and sex to make the plot work. It takes place in the forties and fifties and the era is perfectly drawn here. There is a sense of innocence and loss as it spans before WWII and after when things began to change. Reading this book made me almost long for the days before I was born. This one is atmospheric as well as beautifully written.If you like good horror, this book is for you. A wonderful novel!

Published by Thriftbooks.com User , 19 years ago
Take a classic for children and throw it in the woodchipper! Good idea, great execution...and definitely for grownups.

Published by Thriftbooks.com User , 19 years ago
I read this book over the Christmas holidayperiod and somehow it seemed to fit the mood perfectly. With it's almost fairytale like images of raging blizzards, iced over landscapes and dark snowstorms. SPIRIT is set in rural America just before, during and after World War II and I must say Masterton captures the spirit (get it) of that time perfectly. It's about these two sisters who somehow get caught up with the malevolent ghost of there past away kidsister. This 'spirit' as mentioned in the title manifests itself in the form of a fairytale queen and she murders everybody who stands in the way, or threatens the girls. There are some real nasty, graphic scenes in here, but you get the feel that the people who fall victim to the spirit really have it coming: a pedophile preacher who abuses one of the girls, a nasty female rival at a writing agency and an even nastier movieproducer. They all get killed and/ or maimed in the most hideous ways (especially the scene with the frozen pool!)I have read most of Graham Masterton's books and this ranks up there with his best (if it isn't his best!). The man has a way of not sparing his readers the most grizzliest details and SPIRIT is no exception, it's NOT for the squeamish! But it's (luckily) not nowhere as vile as his MASTER OF LIES (gorehounds pay attention, I dare you: you won't get past the opening chapter of that book!). SPIRIT'S got a great story to back it up though and Masterton pulls of some great characterdevelopment here, especially with the middle sister, who's ambitious and not always as nice as heroes in books are supposed to be (according to literary conventions).All and all A+!!P.S: I still got Masterton's MIRROR and BURNING in my bookcloset. After reading SPIRIT I'll be getting them out real soon!
Copyright © 2020 Thriftbooks.com Terms of Use | Privacy Policy | Do Not Sell My Personal Information | Accessibility Statement
ThriftBooks® and the ThriftBooks® logo are registered trademarks of Thrift Books Global, LLC