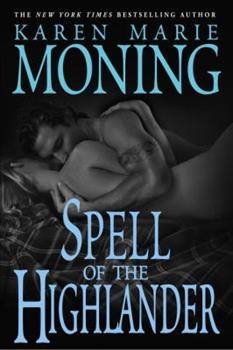 Spell of the Highlander

(Book #7 in the Highlander Series)

Another Great Read by Moning

Published by Thriftbooks.com User , 14 years ago
For some reason I was expecting this book to be less entertaining then the rest. I was wrong. It was a very well woven plot which leaves me looking forward to more "Highlander" books by Moning in the future. I just can't seem to get enough of the time traveling Keltars. Bring it on Karen!!! I'll be first in line for the ride. Thanks for great writing in a sea of veritable "paper crap", your's stands out.

Published by Thriftbooks.com User , 14 years ago
Powerful! Sensual! Seductive! This series just keeps getting better & better! KMM socks it to us again in this captivating, funny, sexy, and romantic drama-romance. Cian (pronounced `Key-on') MacKeltar, 9th century warrior, powerful Druid, and laird of clan MacKeltar, tricked into captivity by his so-called 'best friend' and imprisoned for 1,133 years in the Dark Glass, one of the five magic items of the tremendously powerful T'uatha De Dannan (the Faery). Jessica St.James, student of all things medieval, especially from the British Isles, needs to get a life. All her time is spent at the University working towards her PhD. - filling in for her professor in her spare time - grading papers, taking classes, and running sundry errands. One said errand was taking delivery of a 'package'. Very simple - take delivery of package, sign for it, lock it in his office. Go home. Do not open. Do not tamper. Do not pass go! Unfortunately (or fortunately, for Jessi) nothing ever works out the way it should where she is concerned. The package comes with a condition - viewer verification - in other words, she must open said package before signing for it (said package is waaaay larger than she expected). It turns out to be a beautiful, full-length antique mirror about 6 ½ feet in length, with curious markings around the frame, and strange dark liquid silver `glass'. Unknown to Jessi there is an assassin on the trail of that mirror - all who comes into contact with it are being killed by order of an ancient enemy, who will stop at nothing to reclaim the Dark Glass, because of its power, and its prisoner! Jessi's one chance at survival is Cian MacKaltar, but first she must speak the words that will temporarily release him from the mirror. Jessi must choose: she is trapped in the office with the assassin who leaves no doubt in her mind that he will kill her as easily as taking a breath, - should she speak the words and unleash this 9th century, just-this-side-of-tame, Druid/warrior - six & a half feet of raw male, face of a fallen angel; eyes and a voice to melt the Polar icecap! Global warming - take a back seat, puh-lease! Silky black hair with the requisite side braids (the mark of a chieftain) and beads; muscles sleek and taut (even after 1,133 years in captivity - it is after all a magic mirror!! And hey, don't sweat the small stuff)!! This is such a gorgeous read, that after I finished it, I re-read portions of it! I didn't want to say good-bye to Jessi & Cian or the twins and their wives for that matter (our old friends from previous MacKeltar books). I loved the ending - kept me in suspense right up until then. And also the footnote from KMM about Jessi & Cian being spotted in a small Highland pub doing the slow dancing thing! I think you'll not regret buying this book! It's a real treat! KMM rules!

That was a great book!

Published by Thriftbooks.com User , 16 years ago
There is nothing more important I can say in this review than this: Get this book. Read it. And then close it with a sigh of satisfaction, while wondering when the next one will be out.

Drop Whatever You're Doing And Get This Book

Published by Thriftbooks.com User , 16 years ago
Oh my god... wow. I am just amazed at how great this book is. The character, Jessi, is such an amazing woman. The man... if only I could find a guy like him. The way Karen Marie Moning writes is just fantastic. The intro, middle, and end are all beautifully written. I don't even know what else to say... I'm speechless. Follow my advice and get this book. It will make you happy the rest of the week, just reminiscing about the story-line.

Published by Thriftbooks.com User , 16 years ago
I absolutely LOVED LOVED LOVED this book!!! Why are you sitting here reading this?! Why aren't you out getting the book? I love the female character in this book. Most romance books are all the same... there is a stupid, weak, little girl who doesn't know half of what is going on, and then she is swept off her feet by a blundering idiot known as a male. But Moning's book is very different... her female character, Jessi, is very independent and strong. She is on her way to getting a PhD when her whole life changes because of Cian. I'm not going to tell you anything else about the plot of the book, because you can read it and figure it out for yourself. I believe that most people who read this book will become entranced with Karen Moning's style of writing. And the sex scenes... wow! Hot!
Copyright © 2020 Thriftbooks.com Terms of Use | Privacy Policy | Do Not Sell My Personal Information | Accessibility Statement
ThriftBooks® and the ThriftBooks® logo are registered trademarks of Thrift Books Global, LLC