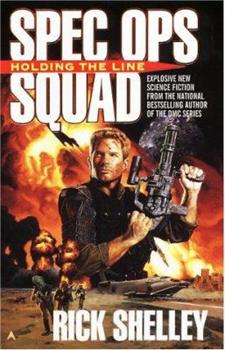 Before Spec Ops Squad training is completed, Sergeant Bart Dragon Drak gets the news that the enemy Ilion Federation is making a push towards the core worlds, which would spell doom for Earth and its allies. Now, Drak must return to the hellish battleground of Fintsen with his regiment and hold off the Federation tide to the last man--or alien.

A Mixed Bag of Grunts

Published by Thriftbooks.com User , 18 years ago
Holding the Line (2001) is the first novel in the Spec Ops Squad series. During the war with the Ilion Federation, Bart Drak is the squad leader of a special ops squad in the Ranger Battalion of the 1st Combined Regiment, a unit including every species in the Alliance of Light. In this novel, Bart has just returned from Dintsen, where his ranger battalion has been mauled by the surprise attack that started the war with the Ilion. Since the unit was on Dintsen only for joint training with a divotect battalion, the casualty rate in his unit was very high -- 75% dead -- and even worse among the divotect. Bart is training infantry recruits at Fort Campbell when he is pulled out of the field to meet Major Wellman, the battalion commander, to be informed that he has volunteered for the 1st Combined Regiment. As usual, he and Wellman get thoroughly irritated at each other. Bart's orders say that he is to report for transport to Dancer, a previously uninhabited world in the middle of nowhere. There he meets his squad: Lance Corporal Fred Wilkins, the only other human; Corporal Ying'vi Souvana and Lance Corporal Trau'vi Kiervauna, the porracci; Privates Iyi Col Hihi and Oyo Col Hihi, the biraunta; Private Jaibie, the abarand; Private Ooyonoa, the divotect; and Privates Fang and Claw, the ghuroh (whose real names are impossible to spell or to pronounce). Although Bart has been warned that porracci are aggressive and replace their superiors through trial by combat, he is not told that biraunta are terrified of porracci. Moreover, the ghuroh do not even arrive until the eleventh week of training. The regiment's first assignment is to take back Dintsen from the Ilion Federation. They will be reinforced with a porracci battalion and two additional mobile artillery batteries, but they will face an estimated six battalions of combat troops, mostly tonatin. They are already outnumbered six-to-five going in, not counting the defenders advantage in a spaceborne assault. This novel portrays future warfare from the point of view of the men who fight and die in the war zones. The author has at least a nodding acquaintance with military terminology and practices, but I can't find any mentions of military service in his (rather short) bio. In any case, he makes this story come alive; you feel like you are serving at Bart's side in garrison and in combat. Recommended for Shelley fans and anyone who enjoys small-unit combat SF stories.

Good, but can you include some more plausible technology?

Published by Thriftbooks.com User , 19 years ago
I don't read SF, but have been looking for near-future/future military/space novels, and I was browsing the SF shelves at one of my local bookstores and picked up SOS: Holding the Line. Looked good, interesting concept, so i picked it up, saying to myself that if this [was weak], i wouldn't follow the series or the author. I was pleasantly surprised to find myself enjoying the action, and the interaction between the humans and the various alien species of the Alliance of Light. What I was disappointed about was the lack of believable weaponry, sensors and equipment that the 1st Combined Regiment used. I was also a bit miffed that there were some ground units, such as artillery, but no tanks or IFVs, and there wasn't any description of the aerospace fighters or its weaponry. Ok, i'm probably being a bit too picky, because it's essentially about the rangers,not the Grand Alliance's spacecraft, ground units, or other cool weaponry. For those two reasons i gave it four stars instead of five. It has however got me interested in military SF and i have added John Ringo, Ian Douglas and Rick Shelley to my bookshelves.Reading Deep Strike at the moment, enjoying it so far!

Published by Thriftbooks.com User , 20 years ago
Unlike the usual smart alec mil-sf heroes, Drak and his squad of assorted aliens go where brass sends them, shoot enemy, get shot at, do not know big picture until much later and do NOT save the universe by daring action. The general feeling is not one of adventure, but of hard, unpleasant, dangerous work that has to be done.This basic honesty and unwillingness to entertain is strangely charming, reminding me of WW2 memoirs. Buy this book if you like careful, unhurried world-building for the sake of itself. Do not buy it if you like adventure and galactic intrigue.

Published by Thriftbooks.com User , 20 years ago
Unlike his DMC series, which Shelley wrote in the third person, we get the first person perspective in Spec Ops Squad.Shelley's flavor and "feel" of DMC is right along with the SOS, even though the end of DMC reveals that it was many years (centuries?) later when man finds non-human life, the tactics, language and gear of the SOS all have that DMC "look 'n feel."Nevertheless, if you liked any of the DMC series, you'll like this one.My only nit-pick would be that Sgt. Drak still talks and acts like any of Shelley's DMC officers -- not like a "real" NCO.

Published by Thriftbooks.com User , 20 years ago
In the distant future, mankind has developed the hyperdrive that allowed humanity to spread out and colonize planets around the galaxy. The colonization has gone on for centuries before Terrans encountered another species and when they did they learned about the Alliance of Light. The Alliance consists of several different species from many different worlds who banded together to form a trading union. Earth joined the league as soon as membership was offered, but eventually the Alliance turned to military matters in order to deal with their enemy the Ilion Federation. Soon the Ilion invaded the outer worlds of the Divotect Confederation and began a purge of the native population that amounted to genocide. Although the Alliance had to withdraw from Dintsen when it was first attacked, a special ops interspecies regiment returns to the beleaguered planet, intent on reclaiming it and throwing the Ilions out of that section of space. Sergeant Bart "Dragon" Drak speaking in the first person gives the reader an up close and personal view of interstellar war. Rick Shelley is terrific at creating alien species that seem real, all with their own look, quirks and beliefs. SPECIAL OPS SQUAD is military science fiction at it's very best.Harriet Klausner
Copyright © 2020 Thriftbooks.com Terms of Use | Privacy Policy | Do Not Sell My Personal Information | Accessibility Statement
ThriftBooks® and the ThriftBooks® logo are registered trademarks of Thrift Books Global, LLC