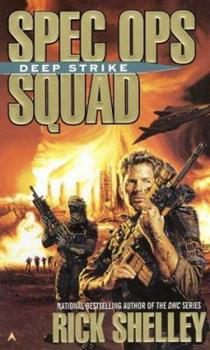 This second installment of the Spec Ops Squad saga finds the First Combine Regiment recuperating on Earth. It's not long before they're back to basic training--and it's Sergeant Bart "Dragon" Drak's job to ensure that the varied alien races learn to function as a team. Now Drak must lead them on a new mission against the Ilion Federation. (July)

Published by Thriftbooks.com User , 18 years ago
This is a great book, but i suggest to start with the first in the series, alone you may not understand it but this series has the potential to turn in to one of the greatest military sci-fi series, i also suggest another series by him that starts with the book cadet.

Published by Thriftbooks.com User , 19 years ago
In the far distant future, humanity has met other species and joined with them to form the Alliance of Light, an organization of mutual protection and exploration. While conducting a training exercise on the planet Dinsten, the Illion Federation invades the planet and the alliance had to retreat. Sergeant Bart "Dragon" Drak, with his combined First Regiment, took back the planet after several bloody battles and are now recuperating on the planet Earth.After sixteen weeks of training, Bart and his squad are assigned new orders. Instead of retaking conquered worlds the military is going on the offensive. They are going to invade Olivat, a long established federation colony and place an army of occupation in it once they have conquered it. This is Bart's account of the part he played in the war of Olivat.Rick Shelly knows how to write compelling military science fiction thrillers that are so action packed, readers hardly have a moment for an oxygen break. The audience learns what it is like to be a small but vital part of a big operation and how the individual feels about invading a planet with a heavy civilian population. The Spec Ops Squads is a series with plenty of heart.Harriet Klausner
Copyright © 2020 Thriftbooks.com Terms of Use | Privacy Policy | Do Not Sell My Personal Information | Accessibility Statement
ThriftBooks® and the ThriftBooks® logo are registered trademarks of Thrift Books Global, LLC