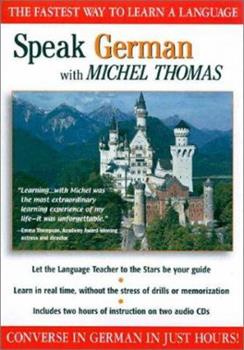 This description may be from another edition of this product. Anyone can learn a language with Michel Thomas--The World's Greatest Language Teacher. No books. No writing. No drills. And nothing to memorize--ever! With his unique program, Michel Thomas has taught...

Published by Thriftbooks.com User , 16 years ago
I must say that I have never tried to learn German, but I took four years of Spanish in high school and learned less functional Spanish than I did in about 12 hours with these CD's. I only have the 2 CD set not the 8 CD set, but I wish I had purchased the full set and will do so as soon as I can find the money. I don't think you can learn it straight through, how I did it was listening to the CD's repeatedly so that I could absorb more. He does not focus on nouns instead he focuses more on functional vocabulary, pronunciation and basic grammar. He begins with a simple sentence: Was wollen Sie? What do you want? and continuously builds on this adding new words and removing old words so you never learn a word without a sentence or a way to use it. He does have a slight saliva problem, but after about 45 minutes you no longer notice it. Somebody said that the CD's were worthless and "Mann kann hier kein gut Deutsch lernen!" Well maybe I can't MASTER german using these CD's, aber ich erlernte viel, um Sie zu verstehen (I learned enough to understand you).

A language course that works!

Published by Thriftbooks.com User , 17 years ago
Finally, learn a language like a child - by speaking it. No idiotic drills or memorization. And you don't have to be a "rules engineer" trying to think of complex grammatical rules while simultaneously trying to speak - a method which we've all experienced to be an abysmal failure. Also, Michel has a way of building complex structures, simply, while ignoring vocabulary - which you can and do learn as a "byproduct."

Published by Thriftbooks.com User , 18 years ago
I finished the 8 cd set and really liked it. One thing that was different from other language programs is hearing how the American and English students pronounced the german words with Michel correcting them. I actually found this more helpful with my pronounciation than hearing only native speakers, I don't know why that is, maybe allowed me to notice similar problems with my pronounciation and I sure miss it now that I've moved on to a different program. I learned more in the first 3 cds than 2 half semesters at community college.

Best of Its Kind!

Published by Thriftbooks.com User , 19 years ago
This was a great course (8 CDs). I was stationed in Germany for three years, but never had this mastery. Mr. Thomas teaches you how to put sentences together in a logical manner. You not only understand how, but also why. Some folks criticized the male student as irritating. I found the female student more distracting. In a course that is supposed to be purely oral, she was pronouncing some words as an English-speaker would read them. Since she had never heard the words pronounced that way, she must have been reading. But, in fairness, this was infrequent and really amounts to nitpicking. I liked this course so much that I just bought Mr. Thomas' Spanish course.

Published by Thriftbooks.com User , 20 years ago
This is an excellent 2 hour introductory course to German. You will hear what German sounds like and learn a bit about sentence construction - but set your course expectations accordingly. This 2 hour course is simply designed to provide you with a brief 'glimpse' of what German is like. You will not really learn all that much; a few phrases and words - but you'll know what you are getting yourself into. If you like what you hear you can then purchase the full 8 hour introductory course with Michel Thomas (note that the 2 hour introduction course is simply the first 2 hours of the 8 hour course). My recommendation is that for those of you who really think that you want to learn German, purchase the full 8 hour course straight away and get on with it! For those of you who are unsure and really just want to hear a bit of German to see if you like it, then go for the 2 hour introductory course and take it from there. Michel takes you through sentence construction and vocabulary step-by-step as you learn with two other students. You really start to like Michel and his teaching methods. Michel's approach is really good - but again, set your expectation accordingly. There will be no instant grasp of the language; if you want to learn a language you must put the time and effort into it - this is just one of many approaches.
Copyright © 2020 Thriftbooks.com Terms of Use | Privacy Policy | Do Not Sell My Personal Information | Accessibility Statement
ThriftBooks® and the ThriftBooks® logo are registered trademarks of Thrift Books Global, LLC