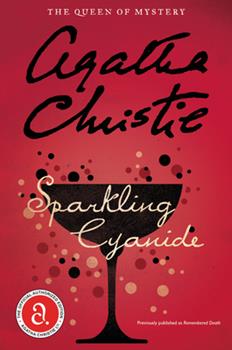 (Book #4 in the Colonel Race Series)

In Sparkling Cyanide , Agatha Christie seats six--including a murderer--around a dining table set for seven, one year to the day that a beautiful heiress was poisoned in that very room. Six people sit down to a sumptuous meal at a table laid for seven. In front of the empty place is a sprig of rosemary--"rosemary for remembrance." A strange sentiment considering no one is likely to forget the night, exactly a year ago, that Rosemary Barton died at...

Published by Thriftbooks.com User , 13 years ago
After the sad suicide of Rosemary Barton, life went on. Her sister, Iris, got used to her absence. Her husband mourned her, but began to pick up his life again. Suicide is difficult to recover from, but it appeared that recovery was in sight for the family. That is, it was until some mysterious notes make a terrible accusation: Rosemary Barton, they claimed, was murdered. Murder, not suicide. With that suspicion, everything changes. Remembered Death (also published as Sparkling Cyanide) is loosely linked to The Man in the Brown Suit through the character of Colonel Race. The plot also has some similarities in terms of the romances between the respective leading ladies and their suspicious men. The Man in the Brown Suit is much earlier and somehow stronger. The rollicking romance of the first book gave way to the claustrophobia and cynicism of the second. It certainly is not one of the weakest Christie novels, and for the period in which it was released, it stands quite firmly in its shoes. I enjoyed it, as I nearly always do when AC is involved. This was a first time read for me, which was delightful. I had honestly thought that I had read every Christie at one point or another. Nice to discover that I was wrong. Recommended.

A treat for Col. Race fans

Published by Thriftbooks.com User , 16 years ago
Charming socialite Rosemary Barton had committed suicide during her birthday party. Or had she been murdered? She had been a bit depressed after a prolonged bout of the flu but Rosemary had everything to live for, she was young, rich, had both a devoted husband and a lover. And why choose a busy glamorous restaurant during a dinner party held in her honor? Over the next few months doubts began to surface over Rosemary's death, but if she had been murdered then who could have done it but a guest at her party - her husband, adoring younger sister, loyal secretary, friend, her lover or his unsuspecting wife? Then the second murder happened..... This 1943 mystery (also published as REMEMBERED DEATH) is told from the points of view of starting with Iris, Rosemary's younger sister, shifting to the other members of the ill-fated dinner party. The detective called in here to solve the crime is the mysterious Col. Race. As always with a Christie novel the clues are all fairly laid out for the reader to follow, the mystery is clever with some interesting twists and turns along the way.

Published by Thriftbooks.com User , 17 years ago
"Sparkling Cyanide," also published as "Remembered Death" was the first book by Agatha Christie that I ever read, and it is still my favorite. The story centers around the death of Rosemary Barton. What is so interesting about this story is the fact that it is a year after Rosemary has died and the reader needs to piece together what actually happened through remembrances of others. Whether you're just looking for a good way to spend a rainy afternoon or you're looking for a challenging mystery, this is a story every Christie fan should read.

Death From the Past Lends Itself To Great Detective Story

Published by Thriftbooks.com User , 20 years ago
Agatha Christie goes back in time to solve a murder. The victim was Rosemary Barton who died the year before the story begins. She was celebrating her birthday with husband and friends at a fashionable restaurant when she apparently took her own life. Because no one present had any desire to kill her and cyanide was found in the depressed woman's purse, suicide was accepted as the cause of death. Nine months later, her husband George begins receiving anonymous letters saying the death was not what it appeared. These hints of murder lead George to suspect that one guest at the dinner party did indeed kill his wife. The killer strikes again a year later when an almost identical party is held at the same restaurant to celebrate the birthday of Rosemary's younger sister Iris.Who was the beautiful heiress Rosemary Barton? Through the words of each of the characters, the reader gets various versions of Rosemary---her personality, her lovers, her love affairs, her marriage, her death. Once again, Christie gives us memorable characters: Iris, the younger sister who failed to inherit but would receive all on Rosemary's death; George, the husband who just might be resenting her philandering ways; Ruth Lessing, George's faithful secretary; Anthony Browne, her gentleman friend with a notorious past; Stephen Faraday, one of her lovers; and Sandra Faraday, Stephen's wife. Colonel Race, a recurring character in Christie novels, appears in this one as a family friend of the Bartons who is called in by George to find the killer. In 1983 this novel was adapted to television. Unfortunately, by moving the setting from England to California and updating the plot, much of Christie's excellent novel suffered.

Published by Thriftbooks.com User , 20 years ago
This was such a great book, this was my first time reading Christie's books and it's an all time favorite. It is so clever and not a typical murder mystery you will often read. Get it, read it, you'll love it
Copyright © 2020 Thriftbooks.com Terms of Use | Privacy Policy | Do Not Sell My Personal Information | Accessibility Statement
ThriftBooks® and the ThriftBooks® logo are registered trademarks of Thrift Books Global, LLC