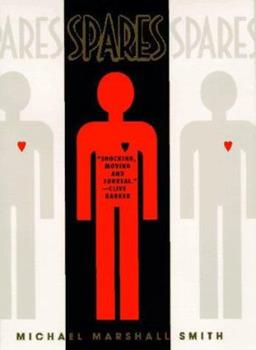 Suppose for a moment you're Jack Randall.??You're a loner, an ex-cop, the dangerous veteran of a savage war.??All you've held dear has long ago been destroyed.??For the last five years you've been hiding out on a spares farm, working at the only job that will still have you: guarding people who have never seen the outside world and can't even spell the word "escape." In short, your luck has run out. You might think things couldn't get any worse.??You'd...

Ever Thought Of Cloning Yourself ?

Published by Thriftbooks.com User , 19 years ago
Michael Marshall Smith effortlessly blends the worlds of Douglas Adams, William Gibson, Will Self and Raymond Chandler in this illuminating Sophomore novel. "Spares" is a humane, cleverly written rumination on the nature of humanity, and how far we'll go to convince ourselves that we've lost it, masquerading as a cyber-punk detective-thriller/comedy/fantasy/horror novel. Taking, as it does, our worst fears about the misuse of cloning technology and accelarating them to the Nth degree, Michael Marshall Smith plunges us into the world of Jack Cardigan, a disgraced former policeman/war veteran/drug addict running from a past he can't escape into a future he can't control. On the way he'll revisit another plain of reality, be accosted by a talking Fridge and explain to you where cats really do "go" when you let them out. Yes, it is as off the wall as it sounds and several times more ingenious than you suspect. If you're a would-be writer, you'll put down your pen and not want to bother after reading this. It really is that good.

Published by Thriftbooks.com User , 19 years ago
This book is amazing, really. The hero is sort of an anti-hero. By all normal standards, I should despise him, but he has some hidden inner qualities that far outweigh his vices. The subject, which centers on cloning, is becoming almost too real for comfort (especially after reading this book!). The reasons for cloning in the book are horrifying, but not at all unrealistic.Read it. Be disturbed. Watch the news.

Published by Thriftbooks.com User , 20 years ago
I think this is one of the best futuristic books ever writen, because it is so "realistic". Although it's a litle violent, it has certain "details" that describe so well what our society will probably be. The inoperancy of the police force, the power and the futility of High Society, the horror of poverty and the perversity of common crime is so well told that we actually believe that Michael Marshall Smith went in some kind of time journey and saw the future. I recommend this book to anyone with taste for adventure, science and thriller... believe this book will get into your head.

Published by Thriftbooks.com User , 21 years ago
Spares is not something massively profound and life-changing but it is a great book just the same. Spares manages to mold tragedy, comedy, and some awesome sci-fi into one great story. The comedy aspect will have you laughing hysterically at times and the first time one reads this book it distracts from the other elements. The second time through it becomes apparent that the comedy is really just Jack's way of masking his despair and depression. This is the tale of a desperate man who is in the process of having everything and everyone that he cares about taken away from him. Spares is a complete book in every sense of the word. I would highly recommend that you read it. Now where is the movie thats supposedly in the works?

An involving mix of noir and science fiction.

Published by Thriftbooks.com User , 23 years ago
Michael Marshall Smith is a great new writer with a very unique and invividual voice. Coming on the heels of his debut, _Only Forward_, _Spares_ confirms that he is definitely someone to watch!Some reviewers have faulted Smith for attempting to shoehorn too many diverse ideas into a single book, or for creating such an unlikeable person in his protagonist, Jack Randall. Depending on your point of view, this may be a valid criticism. For me, the mix worked and worked in a magical way I come across all too infrequently in my reading these days.Jack is a drug-addicted former policeman in the surreal future world of New Richmond, Virginia, a grounded MegaMall which has been taken over as the basis for a city. On the run with a group of spares he's liberated from a Farm, Jack comes up against the same forces which necessitated his escape five years previously. Throw in the Gap, a strange, interdimensional reality, not quite analagous to cyberspace but similar, in which a war was fought 20 years ago, a war Jack and several of the other characters are veterans of, and the book is almost overflowing with ideas, originality, and an amazing level of energy.If you're a fan of cross-genre mixes, hardboiled/sci-fi, this book is definitely worth your while. Based on his first two novels and a number of his short stories, including "More Tomorrow," an excellent Internet horror tale, Smith has quite a future ahead of him and, for now, a dedicated new fan in this critic.
Copyright © 2020 Thriftbooks.com Terms of Use | Privacy Policy | Do Not Sell My Personal Information | Accessibility Statement
ThriftBooks® and the ThriftBooks® logo are registered trademarks of Thrift Books Global, LLC