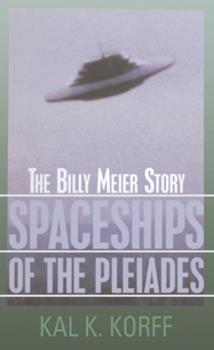 Spaceships of the Pleiades

The case of Eduard "Billy" Meier has gained worldwide attention for his claims of being in "on-going contact" with aliens from the star cluster known as the Pleiades. Purported to be the most documented UFO account of all time, Meier's files consist of 1,000 photographs and 12 motion picture films of the visiting spacecraft. Through thousands of pages of "contact notes," Meier claims to have "passed on" the wisdom and advanced technical knowledge...

Published by Thriftbooks.com User , 15 years ago
As children, many asked the question "Is there a Santa Clause"? Accepting the truth was very hard to do. Kal Korff believes in extraterrestrial life, but proves beyond any reasonable doubt there is not one shred of credible evidence supporting Billy Meier. And that snake oil salesmen are alive and well in today's "modern" world. These folks continue to ask Kal, and anyone with the slightest bit of skepticism to "disprove a negative"; an impossibly. I've heard people ask, "Why didn't he address the UFO sounds in his book"? Maybe because he felt he had embarrassed Meier enough: 1) The sound analysis claims that 32 separate frequencies can be seen on the oscilloscope simultaneously and that 8 of them are in the "inaudible range". The human audible range is approximately 20Hz to 20,000Hz. Meier used a standard cassette with magnetic ferrite tape. The standard frequency range of a cassette tape of that time period is approximately 30Hz to 17,000Hz. The tape itself could not record frequencies above the human audible range. Just as the film grains can not pickup infrared, the magnetic ferrite tape cannot pickup sounds in the inaudible range. This makes the 8 frequencies located within the inaudible range an unsubstantiated claim and throws the entire report in question. The report itself is pseudo-science at it's best, in this case taking something as simple as a change in pitch and describing it in a complex way. In addition the "experts" were told ahead of time they were listening to the sound of a possible UFO. Thereby including terminology like "spinning" and "rolling" which are meaningless in acoustic science. READ THIS BOOK!!!

Excellent and much needed

Published by Thriftbooks.com User , 22 years ago
Of course people will always believe. And they'll always accuse anyone who disagrees of "having their own agenda" and "drawing conclusions from their own opinion." (What else can a researcher draw conclusions from? Someone else's opinion? That of someone who agrees with you?) But for anyone with an education, this is an eyeful. It requires some understanding of science and research methodology, however. Would make a great double-feature with Carl Sagan's superb "Demon-Haunted World."

Everything they don't want you to know...

Published by Thriftbooks.com User , 22 years ago
I just got my hands on this one, and it was truly a fun read. I've laughed over the shoddy photos of Billy Meier for years now, and this investigation into the clims behind those photos was fascinating. It's everything the saucer kooks don't want you to know - the model spaceships photographed against bonsai trees, the "alien woman" photos which turned out to be a dancer on a variety show, and the cult-like atmosphere meier has built around himself and his lies. I'd reccoment this book to anyone with an interest in the UFO scene, or who wishes to provide a skeptical examination of UFO claims to a friend.

Excellent exposé of the most elaborate UFO hoax ever!

Published by Thriftbooks.com User , 24 years ago
I don't see how anyone with an open mind could possibly come away from this book without having serious doubts about the Billy Meier case. Whatever your position on UFOs, you will find this book fascinating. Although Korff himself has had a UFO experience that he continues to be mystified about, he is a serious UFO researcher who believes that the whole field of UFOology can benefit from rigorous scientific examination of specific UFO claims. Extensively documented with footnotes, the book is marred only by a sometimes overly accusatory tone. Note: Kal Korff recently made a public apology to radio talk-show host Art Bell for making what turned out to be unfounded accusations of blacklisting. Korffs quick and abject apology are evidence of his willingness to admit error when shown to be wrong.
Trustpilot
Copyright © 2022 Thriftbooks.com Terms of Use | Privacy Policy | Do Not Sell My Personal Information | Accessibility Statement
ThriftBooks® and the ThriftBooks® logo are registered trademarks of Thrift Books Global, LLC