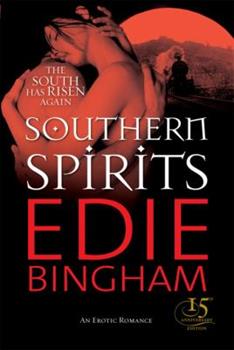 In this heady blend of sex, murder mystery and the supernatural, hot-tempered federal agent Catalina Montoya is partnered with her former lover Nathan Ames on her first undercover assignment. Their investigation of charismatic criminal Jack Wheeler soon envelops Cat in a passionate love triangle.

Published by Thriftbooks.com User , 13 years ago
I read this book with a few pre-existing expectations. I knew it was an erotic story -- not something I often read -- so I was expecting a lot of sex scenes, and probably not a whole lot of characterization. I was surprised in more ways than one. For one thing, if you're reading it just for the sex scenes, you're going to be amazed by the plot. Unlike most sexy stories, your suspension of disbelief increases gradually instead of counting on you to immediately buy an unlikely premise. And while it does get rather far-fetched, by the time you realize HOW far-fetched, you don't care, because you've bought into the world that has been created. (Don't think "far-fetched" is a bad thing. Anything with supernatural elements falls into this category.) For another thing, if you're reading it for a soft, erotic summer read, be prepared for no-holds-barred graphic sex. Lots of it. I was surprised, in fact, at exactly how graphic. I thought it was supposed to be a book "for women" -- but the sex scenes included lots of men's fantasy situations. I think I actually blushed a few times. My only complaint -- and it's a minor one -- is that the author, being British, occasionally uses a word, a phrase, or a grammatical construction that comes across as very... well, British. The characters are in the southern United States, but there are times when the way they speak is just unusual enough to be slightly distracting (from this American's perspective, anyway). It's a marvelously minor inconvenience, though, for a story as fun as this -- and for characters I can still remember months after reading. Well done. I'm looking forward to more from this author.

A well-written, worthwhile entry for the erotica genre

Published by Thriftbooks.com User , 13 years ago
Maybe it's because I've become jaded by the whole genre. Erotic fiction for women (even by women) that I've read in the past seemed to be a dreary, boring procession of sex scenes loosely taped together with the flimsiest of plots, usually involving the submissive female finding herself in some secret sex society. Then I saw Southern Spirits in my local bookstore. The cover stood out for me: a rich sunset-red and jet black, sweltering and steamy. And the back cover blurb offered more enticement, a storyline mixing mystery, the paranormal, and what sounded like a strong, appealing character in Catalina Montoya. As I bought it and began reading it, I could see the scenes clearly in my head and hear the dialogue - the one thing I can't abide with some writers is their tendency to try and show off, using a hundred words when a few are better - and they kept me turning the pages, as I got involved with Catalina, her gorgeous-sounding secret agent partner Nathan (think Mulder and Scully via certain fanfic website stories), and the third point in the triangle, a Southern gentleman crook called Jack Wheeler (who as I was reading reminded me of Richard Gere), and their adventures on a haunted train full of swingers and secrets. This book could work even without the sex scenes in it - that's how strong it all holds together. As it is, the sex was a smorgasbord of indoor and outdoor encounters, twosomes, threesomes and orgies, straight, bi-female and lesbian - and one scene where the heroine is willingly strapped down by her partner and... And you're going to have to get the book and read the rest. The author deserves that much.
Trustpilot
Copyright © 2022 Thriftbooks.com Terms of Use | Privacy Policy | Do Not Sell or Share My Personal Information | Accessibility Statement
ThriftBooks® and the ThriftBooks® logo are registered trademarks of Thrift Books Global, LLC