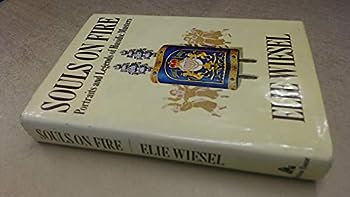 Souls on Fire: Portraits and Legends of Hasidic Masters (English and French Edition)

In Souls on Fire: Portraits and Legends of Hasidic Masters, Elie Wiesel re-enters, like an impassioned pilgrim, the universe of Hasidism. Souls on Fire is not a simple chronological history of... This description may be from another edition of this product.

Published by Thriftbooks.com User , 13 years ago
Wiesel managed to capture the essence of Hasidim in his re-telling of their tales - extremely personal, intimate relationship with the Divine. I enjoyed reading and re-reading this book over the years.

"IN HELL ONE PRAYS BETTER THAN IN PARADISE"

Published by Thriftbooks.com User , 21 years ago
Elie Wiesel describes himself as neither philosopher nor historian but "merely" as a "storyteller who transmits what was given to him, as faithfully as possible, yet lending it his own voice and intonation." He does exactly that in SOULS ON FIRE: HASIDIC PORTRAITS AND LEGENDS.Before reading this book, I only knew what little of Hasidism one can absorb from watching the Habad Lubavitch funding appeals on Public Television and from casual reading of such novels as Potok's THE CHOSEN.I did know that dancing played a part in Hasidic prayer, but hadn't a clue as to why. SOULS ON FIRE didn't make an instant Hasidic expert out of me, but it did give me a feeling for the history and traditions of a movement that, in the years of the holocaust, played a major, if indirect, part in the preservation of Eastern European Jewry and its culture. (It made reference to the dancing, too.)The modern Hasidic movement seems to have started with the Baal Shem Tov (1700 - 1760). (Baal Shem Tov translates as Master of the Name.) Passed from the Baal Shhem Tov through succeeding generations of disciples, some of whom also became Masters, or Rebbes, in their own generations, the movement survived, and even thrived in a much less than friendly environment. Eventually it had spread to three geographical areas; the Ukraine, White Russia, and Poland. In each area there were individual Rebbes who taught their own brand of Hasidism and who had their own fervent followers.Since Wiesel's approach to his subject is to let the various tales and parables of the Rebbes speak for themselves, it's my intention, in this review, to do the same but on a very limited scale. A few comments follow:Baal Shem Tov: "Whoever loves God exclusively . . . . excluding man, reduces his love and his God to an abstraction."Wiesel's Grandfather, a Hasid, but not a Rebbe: "To induce others to believe is easier than to believe."Menachim-Mendl of Kotsk: "In Hell one prays better than in Paradise."Rebbe Bunham of the School of Pshiskhe: "I think that I could reform any sinner - except a liar . . . . and the worst liar is one who lies to himself."One complete tale which evidently is meant for God's ears and which reflects on man's seemingly futile wait for the Messiah:This is also from Rebbe Bunham: A king, wanting to punish his son, sends him into exile in a distant land. The prince, suffering from hunger and cold, waits to be recalled. As years go by, he loses the very strength needed to wait for the royal pardon. Finally, many years later, the king sends an emissary with full powers to grant the prince every desire and wish. In response, the prince asks for a piece of bread and a warm coat, nothing else. He has forgotten that he is a prince and that he could return to his father's kingdom.Some of the more pessimistic Rebbes seemed to feel that God had to be reminded of his responsibilities to man, and so reminded him through their tales and parables.Wiesel tells us that Hasidism

Published by Thriftbooks.com User , 22 years ago
The subject is inspiring and the text is prose at its most elegant.

A journey through Hassidism

Published by Thriftbooks.com User , 23 years ago
Hassidism, its tales, legends, and masters, has always been a source of mystery and confusion. "Souls on Fire" is a journey through Hassidism. Traveling from the source and further development of this unique Jewish religious manifestation is a joy when led by the mind and sould of Elie Wiesel. His personal and emotional input, the tales and legends included throughout the book, and his non-academic but rather humane approach (a typical Hassid) is the most sincere attempt in trying to understand and "speak of the unspeakable," sparkling light into a religious fervor born out of anguish and despair. The purpose is not to agree or understand, but rather to believe.

An amazingly written book on a fascinating subject

Published by Thriftbooks.com User , 23 years ago
In this fascinating book, Ellie Weisel gives a personalized history of Hasidism. Using his own memories and insights, plus whatever tales and legends he finds most interesting, he takes us through Hasidism from its beginning through a lot of the Hasidic masters. The subject is interesting by itself, especially since many of the legends are profound or funny, and Mr. Weisel's wonderful writing style is the perfect vehicle for it. Buy and read this book!
Trustpilot
Copyright © 2022 Thriftbooks.com Terms of Use | Privacy Policy | Do Not Sell or Share My Personal Information | Accessibility Statement
ThriftBooks® and the ThriftBooks® logo are registered trademarks of Thrift Books Global, LLC