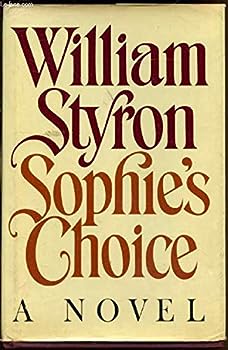 As the fierce lovemaking and fights of Nathan, a paranoiac Jewish intellectual, and Sophie, a Polish-Catholic concentration-camp survivor, intensify, Stingo, a writer who lives below them in a cheap rooming house, becomes more and more involved in their lives.

Published by Pattersonfreak , 3 years ago
I haven't read it yet but i did read the flap and it's the complete opposite of wat I heard it was about.

Published by Thriftbooks.com User , 16 years ago
In Sophie's Choice, William Styron does a masterful job of telling a horrific tale in bearable way. Sophie is a Polish Christian who survived 18 months in Auschwitz before the camp was liberated by the Allies. Of course her story is heartbreaking. But Styron unfolds the tale in a way that allows the reader to take it all in without being crushed by the sadness of it. First, instead of marching out the story of Sophie's capture and imprisonment in chronological order, Styron layers it on, each layer building on the next. When the 22-year-old narrator, Stingo, a Southerner who moved to Brooklyn to write novels, first meets Sophie in the summer of 1947, she gives him only the briefest of versions of her experience in the war. It is only as they grow closer as friends that Sophie, through a series of drunken encounters, provides more details to Stingo, each time admitting that she had lied to him before in earlier versions of her tale. By presenting the horrifying particulars bit by bit, Styron seems mindful of the warning, and even quotes Stalin as saying, that a "single death is a tragedy; a million deaths is a statistic." The reader sees the tragedy of Sophie's experience because, by offering just a little at a time, Styron allows the reader to digest her story, along with a great deal of information about the Holocaust in general. If Styron had presented her story in full from the beginning, the awfulness would be numbing. Also, Styron balances Sophie's tragic past with her tragic present in Brooklyn. In love with Nathan, a brilliant drug addict subject to violent fits of jealousy, Sophie has no chance of building a "normal" life in America. But, given her experiences in the concentration camp, it is impossible to imagine how she could. Rather than present an unbelievable fairy tale of survival, Styron uses the tortured relationship between Nathan and Sophie as the catalyst for her revelations to Stingo, as well as the vehicle of her ultimate, and well-foreshadowed, undoing. Finally, for all its sadness, there is plenty of humor in the book. Some of Stingo's failed romantic adventures are downright funny, as are his self-deprecating descriptions of his writing efforts. Again, without these side stories offering a respite from the main narrative, Sophie's story would be unbearable. Sophie's Choice is going in my Top 10 favorite novels of all times. I don't know yet what it is bumping off the list, but it is definitely going on.

Published by Thriftbooks.com User , 19 years ago
It's not surprising that Sophie's Choice is considered by many to be one of the great novels of the twentieth century. Styron imbues his characters and story with a life of their own. Like many great books (such as Nabokov's masterpiece, Lolita), Sophie's Choice combines elements of Comedy, Drama, Tragedy, and Horror into a compelling whole which draws the reader in. The three main characters are beautifully fleshed out, as are many of the minor characters. Much has been said about the major characters by other reviewers, I'll mention two minor ones. I found the whole Leslie Lapidus episode to be hilarious. She is a perfectly believable character, and Stingo's experiences with her added some levity to what is often a very somber story. The other minor character I found interesting (for different reasons) was Rudolf Hoss, the Commandant of Auschwitz-Birkenau. His character was disturbing precisely because he was such an ordinary man. In a different time and place, he would have been a petty government bureaucrat, perhaps working for the IRS. He studies septic system diagrams for the camp, and gets migraines worrying about production delays in building the new crematorium at Birkenau. In one scene, he sits with Sophie (his secretary) in his attic office at Auschwitz, gazing out the window at his Arabian stallion in its paddock, and marveling at its beauty. From the other side of the house, Sophie hears the constant rumble of the boxcars shunting off the main line with their human cargo. The juxtaposition of the two is quite creepy, and illustrates the complete moral disconnect of the man. What he does for a living would be much easier to explain if he were some kind of sadistic psychopath, but he doesn't even seem particularly anti-semitic. It is his ordinariness which is so disturbing, and it is Styron's power as a writer which brings such characters to life.

Published by Thriftbooks.com User , 20 years ago
William Styron's "Sophie's Choice" has to stand as one of the 20th century's great American novels. Based very loosely on his own experiences in the late 1940s in New York, Styron makes himself into a writer called Stingo who moves into a boarding house in Brooklyn, where he meets a Polish emigré named Sophie and her dangerously unpredictable lover, Nathan. With great delicacy and restraint, Styron traces the evolution of the friendship and love that entangles these three and which has stunning consequences.For those who have only seen the 1985 movie starring Meryl Streep (and for which she deservedly won the Best Actress Oscar), do yourself a favor and read the book. The movie was indeed wonderful, but the book is so much richer and more detailed and Styron's mastery of this compelling narrative is marvelous to behold. For those who have NOT seen the film, you will assume that "Sophie's Choice" has to do with Nathan and Stingo. Heartbreakingly, it both does and does not. Styron has an incredible gift for injecting humor into dark situations. He makes Stingo an inordinately horny, frustrated, pained, wise-cracking man in his early 20s--Stingo leaps off the pages as fully formed and utterly human. Nathan too, in a much different way, is three-dimensional and fiery with life. Sophie is rendered in more delicate tones than the two men, which makes the final chapters of the book all the more powerful. We see what she has withstood and what she has given up and it is inescapably heartbreaking. The book's ending is utterly right and the inexorable product of all that has gone before it. Styron has taken an enormously complex panoply of subjects--young manhood, post-WWII New York, mental illness, obsession, guilt, and more--and structured them into one of the most un-put-downable novels you will ever read.

The American Canon Is Incomplete Without This Novel

Published by Thriftbooks.com User , 22 years ago
Often compared by literary critics to Toni Morrison's 1987 Beloved, for the choices women and mothers are forced into under the most desperate of circumstances and conditions, William Styron's 1979 novel Sophie's Choice is a non-step textual tugging at the heart. In spite of the long passages replete with narrator Stingo's onanistic details (he hasn't gotten any, so the irony is, of course, that he lives in a place called the "pink palace"...hmmm...what's that a euphemism for?), this novel of a Holocaust survivor is not easily put out of one's memory. There are few books I internalize and metaphorize and carry around with me; this is one of those books. The humorous description of the McGraw/Hill publishing offices in Manhattan in the late 40s is a superbly hilarious way to open this novel. We are then introduced, at a rooming house in Brooklyn, to Sophie Z. and Nathan Landau, two of the novel's central characters. We learn that Sophie is a Catholic Pole who survived Auschwitz, but is still haunted by a "choice" she was forced to make while there. I agree with my fellow critic who states that the scene of Sophie's choice (set in the novel on April 1st, nonetheless, echoing, I would assume, Ralph Ellison's Invisible Man)is so dramatically underplayed that I had to re-read it three times to make certain I didn't miss some critical nuance. Styron's choosing to portray the scene from which the novel's title comes as quietly and near the end as possible is a stroke of literary brilliance and keeps the reader page turning without end to find the answer to the question: What was the "choice"? Of course, in the course of the novel, Sophie Z. is faced with numerous choices, but only one choice matters; no, scratch that, all her choices matter, but this one choice is the most soul destructive of all; the self she fled with will ultimately be destroyed by a Brooklyn Jew. Forget the film; it damages this beloved text like any film does. William Styron's brilliance and specificity create a novel (based on a true story--in part, from Olga Legnya's Five Chimneys, which Styron discusses in the re-released 1999 afterword) that deals not only with the Holocaust and its implications for discussion and analysis (Sophie is a Catholic Pole, after all, not a Jew) but with the more mundane factors in life--like brilliance hindered by madness and insanity. A very sharp and unforgettable reading experience. I ask you to approach it with an open heart.--dan

Published by Thriftbooks.com User , 22 years ago
William Styron has written a profoundly moving and disturbing novel with 'Sophie's choice'. The story of Sophie, a beautiful Polish Catholic who survived Auschwitz and was left with no family, and Nathan, her schizophrenic American Jewish lover, as related by Stingo, a naive but sensitive 22 year-old Southerner wishing to be a writer, is, perhaps, one of the most harrowing stories one can manage to read. Styron evidently conducted a considerable amount of research on the Nazi occupation of Poland and the hideous dynamics of their concentration camps, and his synthesis through Sophie (whose name, etymologically, means knowledge) is convincing and compelling. But what makes 'Sophie's choice' go beyond a mere historical novel is the excellent way in which Styron weaves Sophie's story with those of Nathan and Stingo and the deep ruminations on the nature of evil and madness and their consequences. Although Styron sometimes gets long-winded, especially when he has Stingo ponder about sexual matters, the novel succeds in making us understand a sad historical event in more humane terms. Perhaps a creative university professor teaching World War II history would be wise enough to assign this novel to make students realize that history is not, as somebody once facetiously said, 'one damn fact after another'.
Trustpilot
Copyright © 2022 Thriftbooks.com Terms of Use | Privacy Policy | Do Not Sell or Share My Personal Information | Accessibility Statement
ThriftBooks® and the ThriftBooks® logo are registered trademarks of Thrift Books Global, LLC