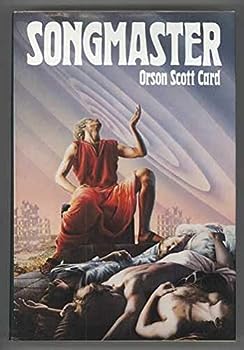 A science fiction classic from Orson Scott Card, the bestselling author of Ender's Game Kidnapped at an early age, the young singer Ansset has been raised in isolation at the mystical retreat called... This description may be from another edition of this product.

This is probably my favorite Orson Scott Card book.

Published by Thriftbooks.com User , 17 years ago
I'll leave explantion of the story to the other reviewers. Instead I'm going to focus on what I personally liked about this particular work. Card seems to have a deep intuitive understanding of human interaction, and he captures these subtlties believably. For the first few pages I noted the flaws in his prose, but after that I became so absorbed in the depth and richness of the stories and characters I completely forgot to feel irritated with the style. That's no small feat! Also, although Card writes about practices he doesn't personally condone - homosexuality, for example - he does so very gently, and without judgement. In fact, he has a great talent for abstaining from providing moral judgement as the third-person narrator, which very few authors are capable of. He can write about things he doesn't condone, and yet he as the narrator never draws judgements. The author remains morally invisible, allowing the readers to draw their own conclusions. Very admirable! There are dark themes in this book, but Card writes those scenes with grace and sympathy, which makes them wonderful to read. Although he writes about violent things and kills characters who the reader has become attached to, he never does this in order to emotionally manipulate the reader, which is also rare in books which are very dramatic. I wouldn't recommend this book for small children (too scary/too many confusing adult themes), but teens, young adults, and adults will all enjoy it. I highly recommend it!

How does he do it?

Published by Thriftbooks.com User , 21 years ago
This was my first Orson Scott Card book, and the second I finished it I rushed out to get another. In my opinion, Card is one of the best American authors ever, and he proves it in Songmaster. This book has so many complex ideas, feelings, nuances, and plot lines, I have no idea how Card dreamed it all up. He never ceases to amaze me, and I never cease to praise his written creations! This book will rock your world.

Published by Thriftbooks.com User , 22 years ago
Never having read any of the works of Mr. Card, and not even associating him with the whole "Ender's" phenomenon, I went into this book without any preconceptions or expectations. I found this to be one of the most insightful and unique stories written in the latter half of this century. The concept of a collective who communicates primarily through song is a twist on the norm, and Orson Scott pulls it off with utter brilliance in his prose and form. At one point I had to actually mark my place, put the book down and regain my composure, lest I surely lose my ability to see through the tears. These were not tears of sorrow, mind you, rather tears of joy. This story grabbed my attention and emotions and slung them around like only an E-ticket ride at the Magic Kingdom can do. I have since read anything and everything I can get my hands on by Mr. Card, and not once have I been disappointed. Although some of his works are better known and more popular, "Songmaster" remains my favorite. Find this book and purchase it immediately. On my honor, you will not be disappointed.Bryon T. Smedley - bsmedley@novell.com

For once, a story of Humanity that is actually Human!

Published by Thriftbooks.com User , 22 years ago
Some people have been trying to compare this with Ender's Game. I think my best explanation of the differences is this: while Ender's Game thrilled me to the marrow of my bone, Songmaster touched the deepest reaches of my heart. Music has always been a part of my life, and I identified with the boy who had the greatest song ever only to lose it when the joy went out of its life. Orson Scott Card just has an amazing way of actually making you care about the characters, unlike so much of science fiction that is written today. It has been a long time since a book made me cry. Songmaster is just that beautiful

This is definitely one of my favourites

Published by Thriftbooks.com User , 22 years ago
I have read about 10 books from card so far. The three that stand out are "Ender's Game", "Speaker of the dead" and "Songmaster".Songmaster tells the complelling story about a boy, kidnapped as a baby and raised in an institution called The Songhouse that is dedicated to singing. The children who are tought there are given to patrons once they are out 10 years old to sing for them. Because Ansset, the hero of the story, is the best Singer ever and has a special talent with other peoples emotions his patron is the Empire of mankind, who has butched millions of people on dozens of worlds to get the throne and who is seeking redemption. The emperor grows to genuinely love the boy. All seems well for some time, but at the place where mankind is ruled complications and intrigue are certain to arise...
Trustpilot
Copyright © 2022 Thriftbooks.com Terms of Use | Privacy Policy | Do Not Sell My Personal Information | Cookie Preferences | Accessibility Statement
ThriftBooks® and the ThriftBooks® logo are registered trademarks of Thrift Books Global, LLC