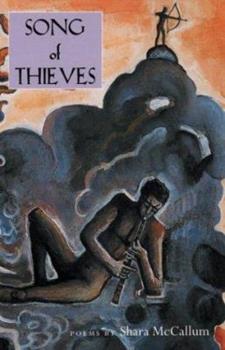 Song of Thieves delves into issues of racial identity and politics, the immigrant experience, and the search for "home" and family histories. In this follow-up to her award-winning debut collection, The Water Between Us , Shara McCallum artfully draws from the language and imagery of her Caribbean background to play a haunting and soulful tune.

A wonderful collection of poems

Published by Thriftbooks.com User , 18 years ago
In the early Nineteen-Seventies, I went with my sister to see the Vincent van Gogh exhibition at the Brooklyn Museum. I remember standing in front of the painting Starry, Starry Night awestruck. All the sights, sounds, and smells of the crowded museum faded away. The power and passion of the painting held me spellbound, for this is the power of true art, to ensnare, enthrall, and mesmerize. Jamaican born poet Shara McCallum does just that in her newest book of poems, "Song of Thieves."With her lyrical voice, McCallum seduces you, and intoxicated by her words you fall into a world painted with language, stimulating to both your imagination and senses. McCallum's topics, presented in riveting verse, cover a wide range of subjects: love, loss of a parent, politics, racial identity, and the immigrant experience of becoming a stranger in your own land. My forte is prose. That is my medium, the way in which I wield the power of language. Although, I enjoy many poems and admire some poets, poetry usually does not speak to me the way a beautifully written work of prose does, that is until now. McCallum spoke to the child in me that still grieves over the loss of my mother. She spoke to the immigrant who has also experienced becoming a tourist in her own land, "a visitor from foreign," a person still in love with the land of her birth. "How long have I loved you Jamaica of my mind?" She spoke to the person still sometimes struggling for identity in an adopted country that at times seems so strange. Logically as in any collection of works, some poems may be superior to others, but I could not tell you which among this group is the best. They are all outstanding to me.
Trustpilot
Copyright © 2022 Thriftbooks.com Terms of Use | Privacy Policy | Do Not Sell My Personal Information | Accessibility Statement
ThriftBooks® and the ThriftBooks® logo are registered trademarks of Thrift Books Global, LLC