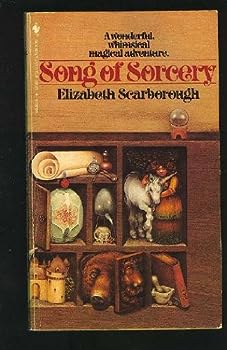 (Book #1 in the Argonia Series)

This description may be from another edition of this product. A portentous song sparks an unlikely adventure in this lighthearted contemporary fantasy by the Nebula Award-winning author of The Healer's War . Colin Songsmith sings a song to an old witch who takes...

Published by Thriftbooks.com User , 16 years ago
As in most fantasies, "Song of Sorcery" thrives on description of its setting and encounters with creatures who could not have been anything but not real, i.e., a talking cat, a lovesick dragon, and a bear prince (who unfortunately cannot be kissed to perfection). Although there are drab and dragging moments, times when you want to say "enough already" with the descriptions, the story successfully combines the traditional concept of fantasy-fiction and modern-speak. The characters deliciously mouth off slang which, under different circumstances, would have been out of place. Scarborough controls her prose up to a point and also manages to have fun with her characters. Of course, you expect good to triumph over evil and a happily-ever-after but you also want to look at the places and converse with the characters. When it ends, it is as if you were saying goodbye to them. You can always turn the pages back but the first time pleasures and hurts like no other. (Sounds like something one would say about sex.) But yes, it's also true that I'm partial to stories that flat out couldn't have been real. I suspend my disbelief longer, I tend to be more accepting of implausibility. There can be that "one true love" and I wouldn't mind if the characters wait for 100 years for it to come. At least, I know it will come. And 100 years would only be a number of pages.

Published by Thriftbooks.com User , 22 years ago
Song of Sorcery is hilarious. The characters are interesting, and real.(Well, mostly.) Anyone looking for a good time without the disembowling and stereotypical protegenists, this is it.

Published by Thriftbooks.com User , 22 years ago
This book was incredibly full of wit and humor that I was laughing almost every time I turned a page. Colin Songsmith sings a local song to an old witch who takes an unlikely revenge. Her granddaughter rescues him from a certain death of being eaten alive by the cat and hears the song herself which happens to concern her recently married sister and a gypsy. Convinced that she has to save her sister, she takes the minstrel, the cat and her magical resources towards Rowan Castle. I absolute recommend this book to anyone who's looking for a good time.

Fantastic, couldn't live without it!

Published by Thriftbooks.com User , 23 years ago
The usage of other witches from other stories was masterful. The author grabbed your attention and held it all the way, and left you wanting more. She made you see things in a different light. I applaude you!!!!

a different view of witches and unicorns for its time

Published by Thriftbooks.com User , 23 years ago
This book is set in medieval(somewhat) times and yet the heroine is not your typical, old time witch. The author uses light humor and familar themes to tell a wonderful story. This book always makes me smile and reach for more of her Unicorn stories.
Copyright © 2020 Thriftbooks.com Terms of Use | Privacy Policy | Do Not Sell My Personal Information | Accessibility Statement
ThriftBooks® and the ThriftBooks® logo are registered trademarks of Thrift Books Global, LLC