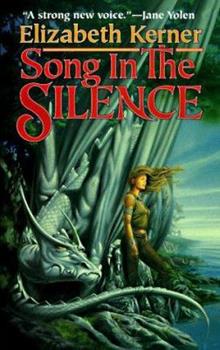 Song In The Silence: The Tale of Lanen Kaelar (Tales of Kolmar)

(Book #1 in the The Tale of Lanen Kaelar Series)

Lanen Kaelar has dreamed of dragons all her life. But not just dreaming, for Lanen believes in dragons. Her family mocks her that dragons are just a silly myth. A legend. But Lanen knows better. And she means to prove it. One day she sets out on a dangerous voyage to the remote West to find the land of the True Dragons. What she discovers is a land of real dragons more beautifuland surprisingthan any dream she could have imagined.

Published by Thriftbooks.com User , 18 years ago
Well, not really new, since I didn't discover this book until recently! The world Kerner builds and describes for her readers is convincingly done - I love the description of the different races and their choices at the beginning (it felt a little abstract at first, but becomes very clear in its importance later in the book, and in the sequel as well). As someone who discovered McCaffrey's dragon books at a young age, and loved them -- it was refreshing to find a new description of the personalities and functions of dragons. Many authors seem to either 'copy' McCaffrey, or else establish dragons as medieval bloodthirsty monsters. This is a new twist on a long-time mythological creature and I applaud it.I would place Kerner on the same level as Anne McCaffrey, LeGuin, McKillip, etc. Very well-written characters and novels. She's going to be a well-recognized author within this field for quite some time (and I say this as someone who was introduced to fantasy by Tolkien's books, and who maintains him on an entirely separate plane because his works are so well done) -- I have consistently been disappointed with many fantasy authors, who often have copycat plotlines, poor characterization, unbelievable worlds and languages, etc. -- but Kerner has managed to break through those barriers with a novel which really was a wonderful read. Some have commented on the love story - yes, there is a love story. I think for some people, that will color their interest in the book and how they assess it, especially if they're used to the 'love story' being an incidental part of the action, only really addressed at the end of the book. But I thought it was well done (and yes, there are people who do have 'love at first sight' type experiences, at the friend level and at the romantic level - I may not be one of them, but I've known couples who've been married 50 years and more who *did* meet that way. Far be it from me to contradict the validity of their experience!).

Fabulous story - a must for all dragon lovers

Published by Thriftbooks.com User , 19 years ago
Thank you Elizabeth Kerner! I am so tired of dragons being portrayed as angry, blood-thirsty killer beasts with no concious thought. Dragons are noble, wise, ancient, and fantastic creatures and here Elizabeth Kerner has captured these aspects with a new resounding flare.When I began this book, the story was understandable and well thought through. The scenes and descriptions were vivid and thouroughly enjoyable. However, first person POV can be difficult for many people,(mainly because few authors write in it) and this book has many first persons - but I recomend patience and persistance. For thos who don't have patience, try to find some (you will be well rewarded), soon after the POV shifting began and I had accepted it, it no longer became a struggle to read, but actually brought a new depth to the story.I recommend this tale (and *The Lesser Kindred*) to all women. Lanen is a Phenomonal and strong woman, to whom all women can relate and see something of themselves (past, present, and future) in her.

If only Dreams Were Real...

Published by Thriftbooks.com User , 20 years ago
This book changes the way a fantasy reader will look at everything. It is up there on my list with Tolkien and C.S. Lewis as a great fantasy.She builds a character you can relate to and doesn't make the plot seem impossible. The reader never really knows who the bad guy is until the end, and a cast of supporting charcters that will make you smile everytime they're mentioned. I have read and re-read this book so many times, and I never get tired of it.If you want a fantasy book with action, mystery, suspense, romance, it's all here. It's all waiting to be opened and to draw you into a world of magic, courage, and choices. The reader will be guessing what will happen to the last battle. Read and Enjoy.

Published by Thriftbooks.com User , 22 years ago
Song in the Silence is one of the best fantasy books I have ever read, and I have read many! The book is primarily about the relationship between a woman, Lanen Kaelar, and a dragon. The setting is in another world that has an almost medieval feel to it. The author's writing style is superb and the book begs for a sequel. It is hard not to fall in love with the characters. Lanen is very strong willed and goes up against many dangers and terrible odds just to fulfil her dream of meeting real dragons. The book is a must of all who enjoyed Anne McCaffrey's Dragonriders of Pern series. A pure joy to read. Delightful and entertaining. Romance and fantasy are skillfully interwoven in this brilliant book.

An alluring work of fiction that melts your heart

Published by Thriftbooks.com User , 22 years ago
This is the tale of Lanen Kaeler (the Wanderer). She leaves her home for the first time in search for the True Dragons (Kantri)and once leaving the safety of her home she goes through an adventure not easily forgotten. She travels to the Isle of the Dragons ,where no ship has returned for a 100 (?) years. And when she goes there she finds a friendship and a love that can never be broken even by death! This book has magic, dragons, a little bit of action, and has that good and evil thing going for it. When she begins her journey you are then sucked into the book and you find yourself not able to put it down! THIS SERIOUSLY IS A GOOD BOOK TO READ!
Copyright © 2022 Thriftbooks.com Terms of Use | Privacy Policy | Do Not Sell My Personal Information | Accessibility Statement
ThriftBooks® and the ThriftBooks® logo are registered trademarks of Thrift Books Global, LLC