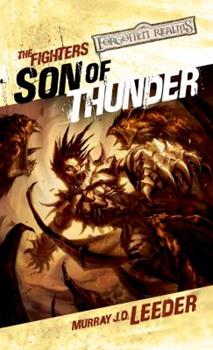 When the Zhentarim undertake to harness the magical ability of the Thunderbeasts, a race of mysterious reptilian creatures, to cloak an entire city, Vell, a young barbarian with the power to transform himself into the shape of the Thunderbeasts, must risk everything to defend his reptilian friends from those who are out to seize their power. Origin

Published by Thriftbooks.com User , 15 years ago
"Son of Thunder" is a novel about a group of Uthgart barbarians set on a quest by their deity to find their totem animals. The problems start when the Zhentarim take interest in the powerful magic somehow connected to those animals... This short description maybe sounds a bit dull and rehearsed, but this is, after all, an interesting book. The thing I liked the most in this novel are the antagonists. Since they get almost an equal share of the page count, you can't say it is a small factor. Leeder's villains are rich in character, interesting and believable. They act logically and in accordance with their natures and/or histories. They have all those little quirks and habits that make them unique and memorable. This book even features a hobgoblin with identity crisis. The plot was well conceived, as well as two other notable subplots. One of the subplots has even a truly unpredictable twist towards the end of the book. The book is also rich with Realms lore, especially concerning the origin and roots of the Uthgart barbarians. The characters gather the lore along the way, which makes it much more interesting than if a wise old guy gave them the whole story in one place (as it often happens in such novels). This book features a whole bunch of characters, and many of them get a page or two for their histories and exploits. I liked that a lot. On the downside, the protagonists are a bit boring, to be sincere. The leading character is a well rehearsed unlikely-hero-who-doesn't-want-to-be-a-hero type. He is probably the weakest link of this novel. But since this is not one of those novels that center on only one character, it makes this complaint a bit milder. The book also features a totally unnecessary short romance, and that is about it on the things I didn't like. All in all, a FR novel definitely worth reading.

Published by Thriftbooks.com User , 16 years ago
It is definitly a must buy. It's jam packed with action, deceit, intrigue and it's share of twists. All the elements to making an excellent read. It's about a Barbarian by the name of Vell who is blessed by the God, Uthgar. If Vell isn't careful, his blessed power can easliy became a forsaken curse because Uthgar gave Vell the power to transform into a dinosaur and crush his enemys. But if he isn't careful he can loose himself while a dinosaur and accidentlly kill all that he loves. Vell and his Barbarian tribe, The Thunderbeasts, are on a holy mission to find the other sacred Behemoths and protect them from the vilest of evil. Will Vell find them in time?...........or will evil pervail....A good book. Check it out!
Trustpilot
Copyright © 2022 Thriftbooks.com Terms of Use | Privacy Policy | Do Not Sell My Personal Information | Accessibility Statement
ThriftBooks® and the ThriftBooks® logo are registered trademarks of Thrift Books Global, LLC